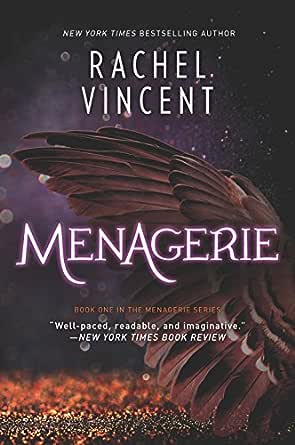 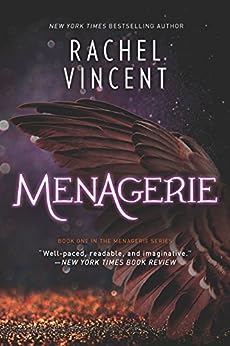 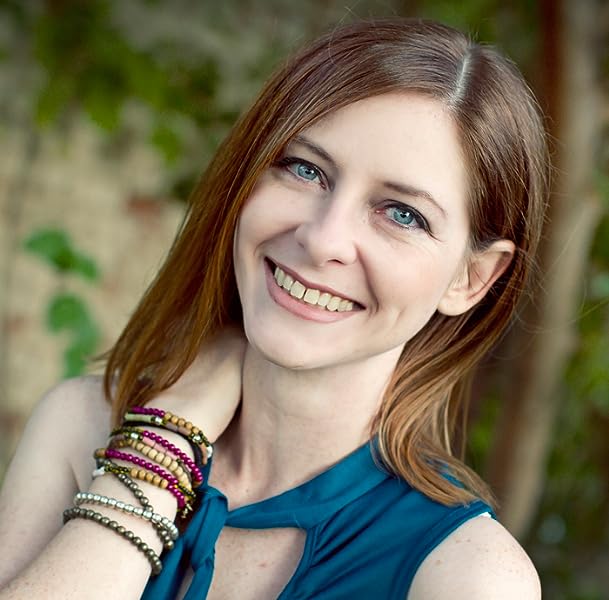 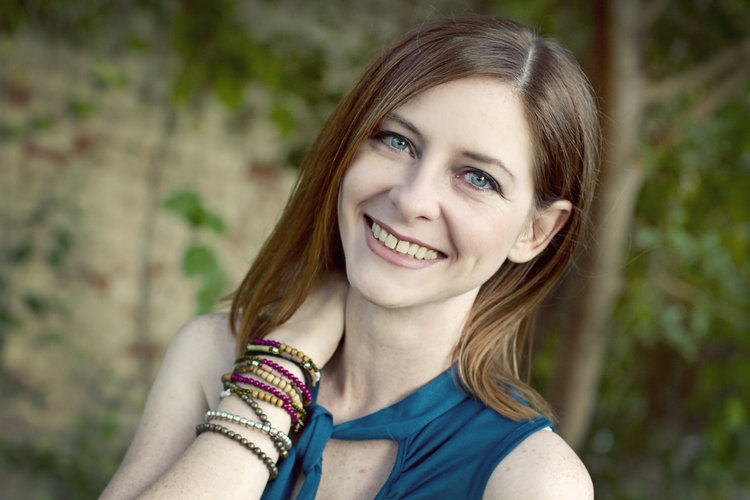 [Menagerie] is a dark tale of exploited and abused others, expertly told by Vincent. -Library Journal, starred review As depicted by Vincent, Delilah is magnificent in her defiance of injustice, and the well-wrought background for her world sets the stage for her future adventures in this captivating new fantasy series. -Publishers Weekly Vincent summons bold and vivid imagery with her writing, especially with the otherworld aspects of the carnival. -Kirkus Reviews Well paced, readable and imaginative. -The New York Times Vincent creates a fantastic world that is destined to pique your curiosity... As Delilah Marlow slowly uncovers a side of herself that she never knew existed, you'll sympathize with her...desperate to see her succeed. -RT Book Reviews, Top Pick! --This text refers to an alternate kindle_edition edition.

New York Times bestselling author Rachel Vincent loves good chocolate, comfortable jeans, and serial commas. She's older than she looks and younger than she feels, but is convinced that for every day she spends writing, one more day will be added to her lifespan. Now absorbed in the dark, tangled loyalties of her UNBOUND world, as well as the travails of a teenage banshee in her SOUL SCREAMERS world, Rachel can be found online at www.rachelvincent.com or urbanfantasy.blogspot.com. --This text refers to an alternate kindle_edition edition.

4.3 out of 5 stars
4.3 out of 5
113 global ratings
How are ratings calculated?
To calculate the overall star rating and percentage breakdown by star, we don’t use a simple average. Instead, our system considers things like how recent a review is and if the reviewer bought the item on Amazon. It also analyses reviews to verify trustworthiness.

Amazon Customer
4.0 out of 5 stars Enchanting
Reviewed in Australia on 3 September 2017
Verified Purchase
I put off reading this book initially because I had heard some of the negative reviews of violence. I would like to say that I didn't find it overly violent at all.
I loved reading about the different cryptids & I'm so glad I gave this book a go.
If you are a Rachel Vincent fan don't miss this book!

sjhigbee
5.0 out of 5 stars Engrossing, dystopian fantasy adventure
Reviewed in the United Kingdom on 3 September 2018
Verified Purchase
Creatures which are not fully human are founded up, stripped of any rights, caged and put on display for the public. Other than the direct, uncomfortable example of what we often do to the animals we share this planet with – what I kept thinking about was those who are trafficked and sold into slavery. The justification for this treatment is an event called the Reaping, where thousands of children were slaughtered by their parents under some mysterious compulsion that has never been fully explained – except that it is believed to be by a creature with non-human powers.

This dystopian, alternative history is well established and I thoroughly believed in Delilah, an apparently ordinary twenty-five-year-old bank teller who reluctantly goes along to one of these carnivals with her friends and fiancé. The ensuing incident sees her stripped of any of her human rights and put in a cage right along the other specimens on display. I really enjoyed following her journey – it was engrossing and horrifying. Though it did jar with me when we were occasionally yanked out of her first-person viewpoint, finding ourselves in the point of view of one of the supporting characters. It didn’t happen sufficiently often with the same characters for it feel anything other than a bit random.

Other than that, I thoroughly enjoyed this one. Delilah makes a convincing protagonist and I enjoyed how many of the imprisoned exhibits looked after each other. The pace is well judged, as you’d expect from a writer of her experience and I gobbled this one up in two sitting. Recommended for fans of character-led, darker fantasy and no romance.
9/10

Bex
4.0 out of 5 stars "Hers Was An Elegant Savagery".
Reviewed in the United Kingdom on 14 January 2017
Verified Purchase
Looking like the monster doesn't mean you are the monster. Rachel Vincent ventures into the World of NA rather than her usual YA and absolutely smashes it. This book is full of gruesome blood baths, cleverly crafted creatures known as Cryptids which bring myth and legend into a reality, and she also keeps the romance low key. Perfect.

Delilah was switched at birth. But she is not a changeling. She is something else, more dark and deadly and capable of destruction. She is human. Well, most of the time. A vengeful creature lives within her, quietly waiting to strike, when other Cryptids like her are harmed. She wasn't aware of this, until she brutally (seriously, it was grim) killed a man torturing a werewolf cub in the travelling crytpid circus - Metzgers Menagerie. Now her true nature has been revealed, and since Crytpids have no legal rights, she has been sold - right into the circus she loathed.

The pacing is great. The plot unravels swiftly, the characters and their various Crytpid natures are fun to read about and the mystery behind a few of them I found really interesting. There are beasts we known from other tales like werewolves, ifrits and Oracles but some I knew less well which added lots more variety - it really is a menagerie of the weird and wonderful which is great fun to read.

Vincent leans heavily on the nature of being different, the obvious prejudice against creatures and the superiority of humankind and how upsetting this is. She basically makes the reader see what life is like from inside the cage and that the true monsters aren't always the ones who look like one. I really loved this. It's true that often we love to stare at things which we know we shouldn't, but our curiosity gets the better of us. Car crashes, animals Im zoos, it's difficult not to look even if you disagree. Delilah originally is a customer of the circus before she becomes a creature trapped within it, and perfectly shows that despite not agreeing with locking up Crytpids for display, she can't help but look at them. I found this really compelling - the complexity of it made my mind whir and I think it's a really strong, important message this author has put across.

Unfortunately, I found the ending quite rushed; there are some significant deaths which are quickly dismissed in this sort of manner "This person has died right in front of me....I'm over it". I found this ridiculous, but it's a small niggle. The larger issue for me was that one of the secondary characters, Gallagher, helping Delilah in the menagerie is a bit of a wet blanket, when initially he seemed quite the opposite. For a potential love interest, and a macho character, I was a little disappointed to hear the same repetitive, too-intense, sappy stuff come from him - he was much better in the first half of the book. Gallagher could have been really cool, being massive and super strong, but instead felt watered down despite his strength because of being a sap. This could be fixed in the sequel - hopefully!

Overall, a really great book with some interesting creatures, some of which I haven't read about before so that was nice, and a fast moving, exciting plot. Definitely give this one a go, I'm counting down to the sequel.
Read more
2 people found this helpful
Report abuse

Dee xx
5.0 out of 5 stars Brutal, seductively dark and addictive
Reviewed in the United Kingdom on 21 May 2020
Verified Purchase
I don't know why some people have labelled this as YA?! It's dark, mature, violent and not romantic. In a world where creatures are mistreated and abused by humans, there is a rebellion within a circus of sorts, where what you see, isn't always what you get. This story is dark, brutal and filled with clever twists and turns. I enjoyed the savagery and embraced Delilah's transformation. Not your usual fantasy/supernatural/fae novel!
Read more
Report abuse

S
4.0 out of 5 stars kind of like starting a scary movie
Reviewed in the United Kingdom on 1 July 2017
Verified Purchase
I was actually nervous to start this one for some reason, kind of like starting a scary movie. Though Delilah feels sympathy for the cryptids imprisoned in the Menagerie, she never imagines she herself is anything other than human. Until her inner monster is inadvertently unleashed when she sees one of the young performers attacked by carnival worker. Then she is bought by the Menagerie owner and forced to perform like the others. You expect that Delilah will find a way out but the book takes a couple of unexpected turns.
Read more
Report abuse

Frazer
4.0 out of 5 stars Full of fantastic creatures
Reviewed in the United Kingdom on 6 February 2019
Verified Purchase
What more could you ask for fey,shifters,werewolves ,minators and more amazing creatures. All this mixed with a good story I love Rachel's imagination so looking forward to reading more from the menagerie.
Read more
Report abuse
See all reviews
Get FREE delivery with Amazon Prime
Prime members enjoy FREE Delivery and exclusive access to movies, TV shows, music, Kindle e-books, Twitch Prime, and more.
> Get Started
Back to top
Get to Know Us
Make Money with Us
Let Us Help You
And don't forget:
© 1996-2020, Amazon.com, Inc. or its affiliates