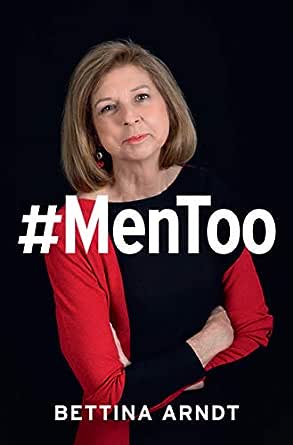 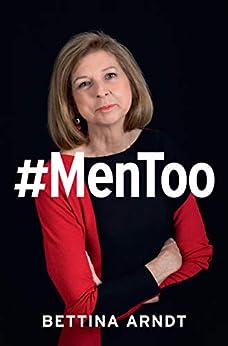 Bettina Arndt is a rare public voice speaking on behalf of men – and the women who love them.

This respected social commentator is renowned for tackling unmentionable topics. A former clinical psychologist and one of Australia’s first sex therapists, she first became well-known for breaking down taboos about talking about sex.

Now it is men’s lives we aren’t allowed to speak about – the very real problems confronting men and boys in our male-bashing society. #MenToo breaks the silence about what it means to be a man in Australia today.

For decades Bettina has been telling it how it is. She writes about sex-starved husbands, the politics of cleavage, fathers losing contact with children after divorce, false domestic violence allegations, men’s soaring suicide rates, the scary grip of feminism.

Bettina sees #MeToo as simply the latest salvo in a long crusade by feminists to crush male sexuality. She finds most women are appalled by unproven allegations are being used to destroy men's careers and fed up with trivial issues being blown up as sexism. Read her powerful arguments about why feminism has gone off the rails – tilting laws, practises and regulations to unfairly advantage women at the expense of men.

This year she faced hostile protesters on university campuses as she spoke out against the fake rape crisis, the myth that our universities are unsafe for young women. Her campus tour prompted a government inquiry seeking to support campus free speech.

#MenToo – collected wisdom from decades of Bettina’s passionate advocacy for men and boys.

Bettina Arndt trained as a clinical psychologist before becoming well known as one of Australia’s first sex therapists. She then became a respected social commentator appearing regularly on television and radio and writing about gender issues. She’s now making YouTube videos campaigning to end the demonisation of men. She is the author of The Sex Diaries (2009) and What Men Want in Bed (2012).

Gary Gavegan
5.0 out of 5 stars How the odds in Corporations, Public Service, and politics are stacked against men.
5 February 2019
Format: Kindle EditionVerified Purchase
This book provides men with an overview of what has gone wrong in the political landscape that has put men at such disadvantage in education, disadvantage in family law which has led to conflict and destroyed lives, and many stifled opportunities to lift themselves to higher achievement, due to the PC culture permeating so many of our institutions. This book will alert men to where the challenges to a better existence lie and help them to formulate a way forward.
Read more

Kindle Customer
5.0 out of 5 stars Facts, facts and more facts.
1 March 2019
Format: Kindle EditionVerified Purchase
I read this for my personal information. I want to read it again to create my own catalogue of the research findings and statistics, mainly because when I discuss masculinty issues I find that both sides, me included, are dealing in unsubstantiated generalizations. The thing I liked most is the way the articles are backed up by solid research results. No abuse, no name calling. Just empirically verifiable statements. What I would like to see now is a template for moving forward before the polarization of our society becomes irreversible.
Read more
Helpful
Comment Report abuse

Don
5.0 out of 5 stars A very good overview of current problems men face in the west
24 February 2019
Format: Kindle EditionVerified Purchase
Bettina Arndt writes a very timely book about how feminism has gone too far and just indulges in demonising men. She writes a lot about the current culture of man-bashing, and how this brings out the worst behaviour in women - everything from self-entitled and narcissistic behaviour, to the excesses of the #MeToo era. A must read for anyone who wants to know about the silent suffering of men in an over-feminised, gynocentric society.
Read more
Helpful
Comment Report abuse

Amazon Customer
5.0 out of 5 stars One of the Best Books I've Ever Read!
29 September 2019
Format: PaperbackVerified Purchase
I have never been so glued to a book the way I have with this one. I finished it in a week (record time for me to read a book). A detailed account of the myriad of problems facing men in this anti-male, misandrist society we are currently living in. Bettina Arndt is heaven sent. So great and extremely valuable to have a woman in our corner batting for us. Thank you Bettina for all the work that you do!
Read more
Helpful
Comment Report abuse

Philip A. Webb
5.0 out of 5 stars Brilliant research to arrive at the real situation
28 January 2019
Format: Kindle EditionVerified Purchase
Arndt is a psychologist who turns her nonidelogical mind to understanding the reality of men's situation and the situation of the women they relate to
Read more
One person found this helpful
Helpful
Comment Report abuse

Rod
4.0 out of 5 stars A timely voice for men.
1 November 2019
Format: Kindle EditionVerified Purchase
A bit repetitive and some case studies didn’t add much to Bettina’s narrative. Despite the shortcomings of the book it still provided a good case for men and the need to rein in the excesses of the feminism.
Read more
Helpful
Comment Report abuse

Glen Brumby
5.0 out of 5 stars An important book
6 November 2019
Format: Kindle EditionVerified Purchase
This is an important book. It represents her consistent work over quite a long time. Some of the articles are fairly old but the issues are timeless.
Read more
Helpful
Comment Report abuse

Graeme Deeth
5.0 out of 5 stars Men too is long overdue
4 June 2019
Format: Kindle EditionVerified Purchase
As a practising psychologist, I hear the problems of both sexes, about equally. But the media reporting has had a distinct anti-male bias for decades.
Read more
Helpful
Comment Report abuse
See all 11 customer reviews
Write a customer review

Go to Amazon.com to see all 10 reviews 4.9 out of 5 stars
Get FREE delivery with Amazon Prime
Prime members enjoy FREE Delivery and exclusive access to movies, TV shows, music, Kindle e-books, Twitch Prime, and more.
> Get Started
Back to top
Get to Know Us
Make Money with Us
Let Us Help You
And don't forget:
© 1996-2020, Amazon.com, Inc. or its affiliates