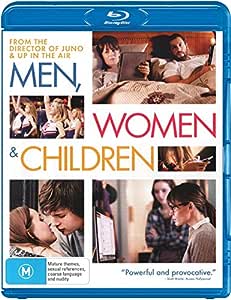 Jason Reitman directs this contemporary drama narrated by Emma Thompson and starring Adam Sandler, Jennifer Garner, Dean Norris and Judy Greer. The film follows the lives and relationships of a group of high school teenagers and their parents as they all contend with the ways in which the internet determines how they communicate, how they see themselves and, ultimately, who they become.

CB
5.0 out of 5 stars Unflinching honesty.
7 March 2016 - Published on Amazon.com
Verified Purchase
In a world of avoided uncomfortable truths, this movie takes a dive into the deep intricacies of modern, human relations. A film that could have been derailed by aiming at stereotypes, this journey is one of familiarity... either by way of personal experience or experience not too far removed from one's own pillow.

For two hours, I found myself on a journey that was terribly horrific to watch, but refreshingly honest. I was torn constantly between the desire to turn off the movie and the need to continue forth. I also spent a great deal of the last act questioning whether the damage of our technological age can be reversed without following in the footsteps of Garner's wonderfully portrayed and well-meaning character.

There was no part of this movie that wasn't well done. The writing, the acting, the cinematography... all amazing. Unfortunately, it all works together to create a gut-wrenching film that conveys a much needed message in our generation. It's the overwhelming honesty of this film that kept it from commercial success. Yet, the reality is that this film could change the lives of those that endure the journey. I would challenge anyone of mature and intelligent thinking to brave the viewing of this film.

Fair warning: this film contains a plethora of adult themes, content, and language (cursing and otherwise). This material has been handled with the highest degree of care, integrity, and gentleness, affordable to a film of such brutal realism. Please do not watch around children and avoid at all costs if you are easily nonplussed by adult or sexual material.

L. S. Luster
5.0 out of 5 stars MEN, WOMEN and CHILDREN: 5 STARS TO CARL SAGAN's PALE BLUE DOT + THE INTERNET FOR SOCIETAL DECLINE
11 December 2016 - Published on Amazon.com
Verified Purchase
To be clear, I rated this as five stars, not because I loved it or even liked it. Reitman's film is a commentary on the breathtaking change in relationships, every variety and on all levels since the dawn of our urgent need for constant and instant connection via wifi and our device of choice. As a mom of two daughters, it was difficult to watch, My girls are 12 years apart. Same dad, same hometown, my firstborn and her younger sister , however, could not have different experiences, largely due to this new normal: our obsession with tech. The film underscores how Carl Sagan has achieved the desired effect. The supposition of Sagan's flimsy pseudo science theory of the "Pale Blue Dot" has done what no dictator or grassroots political movement could. This film couples Sagan's belief in humanity's lack of uniqueness, purpose or reason for existence with the dividing of life before and after 9/11. It was this new day of infamy, 9/11 which traumatized the nation in ways we are still learning. Teens, married couples, everyone trying to connect (and remain so) have been hugely effected and blind-sided by the implications of our brave new world, in which we gladly hand over our cash and our privacy to have our phones on us or our computers in front of us at all times. We know the dangers, the freedoms we are gambling away, but we do it anyway... But more valuable than our money or freedom is the loss of relationships with each other, with our children. It is all uncharted territory, and we are making a mess of it. The movie reviewing professionals have dissed and dismissed this film for poor writing, and the usual movie-making flaws. Writing this, as a mother who held my newborn daughter as I watched the twin towers fall in realtime, I can say that this film does indeed capture the momentous change we have witnessed and experienced together in the years that have followed since that awful day. As for keeping us safer or facilitating deeper connection, this new form of communicating has served to deliver the opposite: we are further distanced into our own worlds. For teens, trying to understand themselves, each other and navigating basic relationships, texting has taught them to dispense with conventional face to face contact. The mood of the film is insecure, dark and pretty hopeless. Sadly, I believe the film captured the activities and actual mood of American society quite accurately. We need a wake up call.
Read more
3 people found this helpful

M. Brasel
5.0 out of 5 stars Totally Unexpected....
27 November 2015 - Published on Amazon.com
Verified Purchase
I didn't know what I was going to see, but I thought it would be another light-hearted Adam Sandler film....goofy even, and that was what I was in the mood for. It started getting heavy and I nearly turned it off, but it hit home on a few cords with regards to kids and internet so I kept watching and am glad I did. It is a movie about boundaries; not just for kids though. For us "grown-ups" too. There's so much out there for all of us to encounter; some of it good, a lot of it bad and knowing how to handle it is in what we teach our kids and what we tell ourselves is good or true or what we know to be these things but are afraid to say. It gave me a perspective I had not had before which was, surprising. I think it is worth watching, even with older kids (min 12+) who can relate it to their own lives.
Read more
6 people found this helpful

John W. Ross
5.0 out of 5 stars Not sure why this movie got panned. It's really enjoyable.
30 December 2015 - Published on Amazon.com
Verified Purchase
I don't understand why this movie is at 31% on Rotten Tomatoes. I can only assume it's because the critics approached it as being some kind of scathing critique of web technology and thus found it superficial, but I really don't think that's what this movie is trying to do. It's simply an interweaving contemporary melodrama with a heavy technology element--and a really well done one at that. The performances are believable and honest, the writing is full of memorable one-liners and scenes, and the production values are top notch. The central romance between Kaitlyn Dever and Ansel Elgort is way more romantic than any John Green novel adaptation.

My only criticism would be that because the movie has to move so quickly through so many interweaving storylines, nuance is often the first thing to go. For example, Jennifer Garner's character is and remains ridiculously uptight for the entire movie up until the last scene. I wanted to know more about why she is the way she is, but because the packed storyline doesn't really allow for for much exploration, we never really know, and thus her final reversal seems rather arbitrary. The other storylines suffer similarly, but this is a minor critique. With so many movies coming out that rely so heavily on nostalgia--reboots, remakes, etc--it's so refreshing to see a movie that embraces newness and at least attempts to engage the contemporary world. That takes guts these days in this risk-averse environment, so I'll add an extra star to my four star review for guts!
Read more
4 people found this helpful
Go to Amazon.com to see all 2,217 reviews 3.1 out of 5 stars