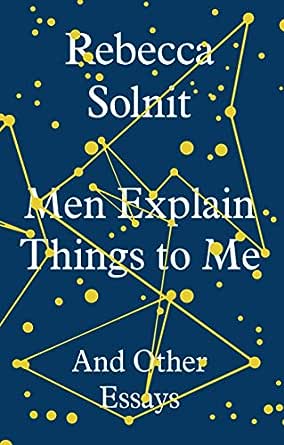 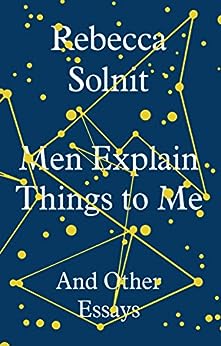 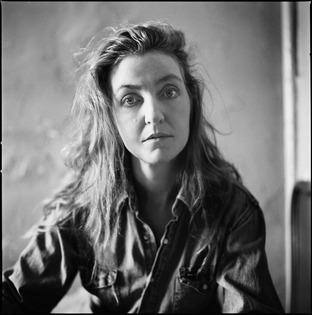 Men Explain Things to Me: And Other Essays Kindle Edition

"In this series of personal but unsentimental essays, Solnit gives succinct shorthand to a familiar female experience that before had gone unarticulated, perhaps even unrecognized." --The New York Times "Essential feminist reading." --The New Republic "This slim book hums with power and wit." --Boston Globe "Solnit tackles big themes of gender and power in these accessible essays. Honest and full of wit, this is an integral read that furthers the conversation on feminism and contemporary society." --San Francisco Chronicle "The antidote to mansplaining." --The Stranger "Essential." --Marketplace "Feminist, frequently funny, unflinchingly honest and often scathing in its conclusions." --Salon

Rebecca Solnit's essay 'Men Explain Things to Me' has become a touchstone of the feminist movement, inspired the term 'mansplaining', and established Solnit as one of the leading feminist thinkers of our time - one who has inspired everyone from radical activists to Beyoncé Knowles. Collected here in print for the first time is the essay itself, along with the best of Solnit's feminist writings.

From rape culture to mansplaining, from French sex scandals to marriage and the nuclear family, from Virginia Woolf to colonialism, these essays are a fierce and incisive exploration of the issues that a patriarchal culture will not necessarily acknowledge as 'issues' at all. With grace and energy, and in the most exquisite and inviting of prose, Rebecca Solnit proves herself a vital leading figure of the feminist movement and a radical, humane thinker.
See all Product description

N Hatchman
5.0 out of 5 stars Some great insights
4 June 2019
Format: Kindle EditionVerified Purchase
Really eloquent essays, which touched upon some important points. For example, how things that are difficult to quantify (like happiness, protecting the environment, creativity) tend to be given lesser importance than things that can be quantified (like money and hours worked). The essays gave me plenty to think about.
Read more
Helpful
Comment Report abuse

Lee Engelstad
5.0 out of 5 stars Excellent essays
6 February 2018
Format: Kindle EditionVerified Purchase
My first foray into reading essays (or feminist literature), and I was pleasantly surprised by how much I enjoyed it. They are interesting, written with compassion and a real understanding of nuance. There are definitely some that stand out more than others but on the whole I really liked it.
Read more
Helpful
Comment Report abuse

magicsmith
5.0 out of 5 stars Enjoyable essays.
22 January 2016
Format: Kindle EditionVerified Purchase
A very enjoyable collection of essays which were both informative and often amusing. It is wonderful to read a book which is fair but provides many thinking points.
Read more
Helpful
Comment Report abuse

Kindle Customer
5.0 out of 5 stars Enlightening
17 September 2016
Format: Kindle EditionVerified Purchase
An embodiment of ideas that set you free, rather than caging you into a train of thought. This is witty and educated and a book I never knew I needed to read. Great to read if you want to understand the nuances of gender equality and the feminist movement.
Read more
One person found this helpful
Helpful
Comment Report abuse

Go to Amazon.com to see all 399 reviews 4.2 out of 5 stars
Get FREE delivery with Amazon Prime
Prime members enjoy FREE Delivery and exclusive access to movies, TV shows, music, Kindle e-books, Twitch Prime, and more.
> Get Started
Back to top
Get to Know Us
Make Money with Us
Let Us Help You
And don't forget:
© 1996-2020, Amazon.com, Inc. or its affiliates