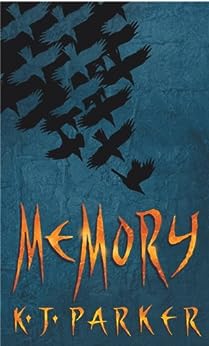 Definitely on of the most entertaining and ultimately satisfying reads that I've had the pleasure to enjoy during the past few years. I turned the last page and read the last paragraph with a sense of genuine regret, knowing that I had reached the end of a quite magnificent tale, an act of literature that really ought to be ranked as one of the most accomplished in this or any other genre. (THE ALIEN ONLINE) --This text refers to an alternate kindle_edition edition.

Definitely on of the most entertaining and ultimately satisfying reads that I've had the pleasure to enjoy during the past few years. I turned the last page and read the last paragraph with a sense of genuine regret, knowing that I had reached the end of a quite magnificent tale, an act of literature that really ought to be ranked as one of the most accomplished in this or any other genre. (THE ALIEN ONLINE) --This text refers to an alternate kindle_edition edition.

Having worked in journalism and the law, K. J. Parker now writes and makes things out of wood and metal. --This text refers to an alternate kindle_edition edition.

Simon Regan
4.0 out of 5 stars Effective and at times poignant ending to the Scavenger trilogy, but not without some annoyances
Reviewed in the United Kingdom on 17 May 2019
Verified Purchase
Spoilers ahead.

At the end of the previous book in the Scavenger trilogy, Poldarn - our protagonist who woke up, sans memories, in the middle of a battlefield at the start of the trilogy - had left his homeland, feeling as alien in the land of his birth as of his 'rebirth'. At the start of Memory he has returned to the Empire, where he is making a living as a foundry worker. However, this relatively idyllic existence is cut short by agents of his past, who are determined to make use of him again.

Parker manages with Memory to wrap up every dangling plot thread from the previous books. Memory is for the Deymeson order and Empire what Pattern was for the raiders - through the viewpoint of the previously somewhat neglected deuteragonist Soishen Monach. Parker has created some of the most memorable concepts in fictional swordplay - the 'moment-in-religion' of the draw, the concept of the circle, etc. Some of what we learn about the order in Pattern doesn't quite have the same verisimilitude - the lethal duels at the end of each year didn't jive for me with the high prestige of the monastery as a place of learning and a destination for the younger sons of the Empire's nobility, especially with the almost gratuitous revelation of what the Order does with their bodies. While it's certainly not out of the question that such a martial religion could exist, I don't think it could slot into the place of Roman Catholicism as the apparently state-endorsed religion of the Roman Empire-cum-Holy Roman Empire-esque state depicted in the novel.

This being a Parker novel, of course, nothing turns out exactly as either you think it will or the protagonists hope, and that's part of the dark joy of their work. I'm not surprised that the Poldarns Flute's failed (or rather, were sabotaged), but I felt it was a missed opportunity not to take a world dominated by a religion that eliminates fear by teaching its acolytes that there's nothing they can't kill, then to introduce the *cannon*.

Those expecting the final book to unleash all the hinted-at supernatural powers in the background of the trilogy will be disappointed; while Poldarn may indeed herald the end of the world of the Empire in a very literal way, it's not in the way pretty much anyone thinks. And while Pattern seemed to have laid down a pretty solid metaphysical backdrop for the way the world 'works', Memory seems to take retroactive glee reminding us that was all just dreams, and dreams aren't real.

The depiction of burns in Memory (which form a pretty major theme, both literal and figurative) are a bit of a (sorry) sore spot, and one I don't think was executed with the potential it could have had. Two characters in Memory are depicted as suffering major disfiguring burns part-way through, making them physically identical, something which is used in a fairly minor plot point, but the ultimate, devastating force built up from the first book - 'he meets himself coming the opposite way, and that's the end of the world' never lands. I strongly suspect there was a significant change to the plot between drafts that transferred the injuries from one character who is also caught in a fiery blast to another who was up until this point a relatively minor figure, removing what should have been a big pay-off.

Memory continues to deliver the dark tragedy the series excels at, with a number of big reveals that put the one at the end of Pattern to shame. Despite some stumbles in the world-building stakes and some missed opportunities, it's a worthy conclusion to one of the most solid fantasy series in the last 20 years.
Read more
One person found this helpful
Report abuse

The Ex Hippy
2.0 out of 5 stars Not one of his better books
Reviewed in the United Kingdom on 31 December 2019
Verified Purchase
I'm going to take a punt and guess that the author didn't know where this book was going to go when he started writing the first one in the trilogy. It's all over the place, contradicts itself many times, characters change direction and personality at the drop of a hat and it comes to a sudden grinding halt with the big reveal that isn't a big reveal at all. Tom Holt (writing as K.J. Parker) is really churning books out at the moment, and there are some that are really worth reading (16 Ways to Defend a Walled City, for instance) but this isn't one of them.
Read more
Report abuse

TJA
5.0 out of 5 stars An amazing conclusion
Reviewed in the United Kingdom on 14 July 2021
Verified Purchase
This series has twisted like a twisty-turns thing… The complexity and gradual reveal second to none with philosophy and characterisation to match. This will be recommended to everyone!
Read more
Report abuse

john fothergill
2.0 out of 5 stars Not his best
Reviewed in the United Kingdom on 22 July 2020
Verified Purchase
A disappointment when compared to the Engineer trilogy and the Two of Swords.
A very rambling plot-line, difficult to know who's mind we were in at some times; the middle book of the trilogy was far too long.
Read more
Report abuse

ben molloy
5.0 out of 5 stars Book as described
Reviewed in the United Kingdom on 24 March 2019
Verified Purchase
Quick delivery, book as advertised
Read more
Report abuse
See all reviews
Back to top
Get to Know Us
Make Money with Us
Let Us Help You
And don't forget:
© 1996-2021, Amazon.com, Inc. or its affiliates