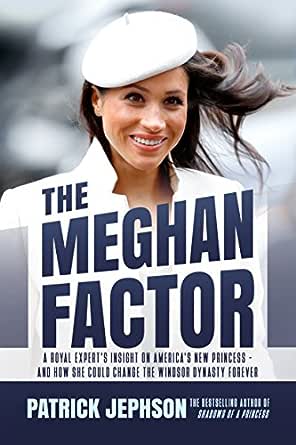 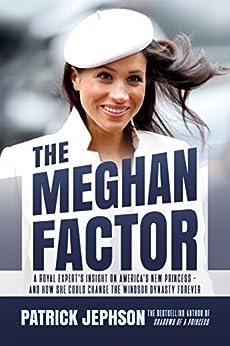 The Meghan Factor: A Royal Expert’s Insight on America's New Princess—and How She Could Change the Windsor Dynasty Forever Kindle Edition

As Californian TV star Meghan Markle becomes a British princess, is this the dawn of a bright new era for the ancient House of Windsor…or a dangerous, destabilizing step too far?

Sixty-five years after Elizabeth II’s Coronation, and thirty-seven after Diana’s ill-fated nuptials, the House of Windsor is embarking on a momentous marital experiment.

The imminent addition of Meghan Markle of California to the planet’s most illustrious and revered royal lineage has so far been billed as an “olde worlde” celebrity curiosity. But in truth, it’s a historic landmark for the British Crown, marking either a 21st-century renaissance or final proof that the dynasty after Elizabeth may be fated to a slow demise.

PATRICK JEPHSON in 2018 marks the thirtieth anniversary of his appointment to the British Royal Household. As private secretary/chief of staff to Princess Diana he witnessed the royal family in some of its least-royal moments, as well as helping to chart the course of Diana’s unique global ascendancy. Now a naturalized US citizen and New York Times bestselling author, in The Meghan Factor he runs a seasoned eye over the media hype and explains to an American readership that all is not what it seems in the world of princes, courtiers, and palace spin doctors.

Patrick Jephson was Princess Diana's equerry chief of staff 1988-96 and is an award-winning journalist, broadcaster, and bestselling author. Now a U.S. citizen, he is a brand and reputation consultant in Washington, D.C. His first book, Shadows of a Princess, was hailed as "the most indelible and authentic portrait" of the world's favorite princess.

wordscapes
2.0 out of 5 stars So disappointing, expected better from Jephson who is an excellent writer.
22 July 2018 - Published on Amazon.com
Verified Purchase
Huge disappointment. I read Jephson's book on Diana which was well written and explained Diana, her duties, her marriage in good form - not sensational just as she was. Excellent read. This is a cheap paperback with large type, not worth the money but also nothing of value. Based on Jephson's experience I expected him to examine the issue Meghan might fact based on her background, etc. A lot of rehashing of Diana very little about Meghan. Perhaps Jephson did not want to offend - seems, no matter how ad the situation, no one wants to upset the royal family. Sad because there's a real story to be told here.
Read more
12 people found this helpful

Kate London
4.0 out of 5 stars This Book Was Informative About What It Takes To Become the People's Princess, And It Made Me Sad
5 January 2019 - Published on Amazon.com
Verified Purchase
Patrick Jephson shows why he was able to steer Princess Diana out of her bimbo clothes-horse days to her fantastic humanitarian reputation towards the end of her life. She was known as a force for good for all over the world (while still staying sexy and glamorous), and it didn't happen by accident. There was a lot of work going on behind the scenes to make it look so effortless!!!!

This book was written in May 2018 when hopes were still high for Meghan being a breath of fresh air, and a person to revolutionize the royal family into the 21st century. Unfortunately Meghan has pretty much broken EVERY single piece of advice given here!!! Only about eight months after her wedding she has gone through the Markle Debacle with her father, the feud with Kate, and has constantly broken royal prototypical with pretty much every outfit she wears. Therefore the British press has turned on her, the royal family can't stand her, and poor Harry looks smothered to death, plus henpecked from here to eternity.

Obviously Jephson can't go back to the royal family to advise the Duchess of Sussex, but poor Meghan NEEDS somebody like him to get her reputation back. Because at this rate, she' s not going to last too much longer.

Elizabeth de Vere Stacpoole Kligerman
2.0 out of 5 stars Redundant
6 December 2018 - Published on Amazon.com
Verified Purchase
The author seems to be more obsessed with the late Princess Diana than with writing anything relevant or interesting about the brand new Duchess of Sussex. None of us know very much more about her after reading this book than we did before. It's much too soon to know how she will cope and one can tell easily enough from watching her literally clinging to her latest husband how scared she is and how anxious not to mess up. Neither do we know if she is trying to convince the public of her love, or actually show him whose going to run this marriage, but there's something very endearing in her nervous need to feel he's there for her. I'll bet she's been made to feel very much an outsider by many members of the aristocracy, and even the blood royal in some cases, but it would be nice to see her become a bit less clingy. Also it would be nice to have more conjecture and opinion from the author, who clearly sees himself as someone with exceptional insight into the Windsor clan. But like the rest of us, he will have to wait and see meanwhile hoping Meghan doesn't become as crazy and duplicitous as Diana. For example what responsible mother of young children drunkenly laughs her head off and doesn't even wear her seat belt? Or cavorting about in skimpy bikinis in front of her almost adolescent sons? Time to leave this poor deranged creature to rest in peace and as the book is about Meghan, write about Meghan.
Read more
7 people found this helpful

alison carmel
2.0 out of 5 stars Meg. Ankle
1 November 2018 - Published on Amazon.com
Verified Purchase
Meghan Markle is BORING but an adequate actress for the part I suppose. She always looks “on” and so unauthentic
,

Read more
8 people found this helpful
Go to Amazon.com to see all 12 reviews 3.4 out of 5 stars
Get FREE delivery with Amazon Prime
Prime members enjoy FREE Delivery and exclusive access to movies, TV shows, music, Kindle e-books, Twitch Prime, and more.
> Get Started
Back to top
Get to Know Us
Make Money with Us
Let Us Help You
And don't forget:
© 1996-2020, Amazon.com, Inc. or its affiliates