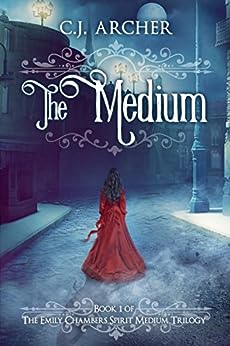 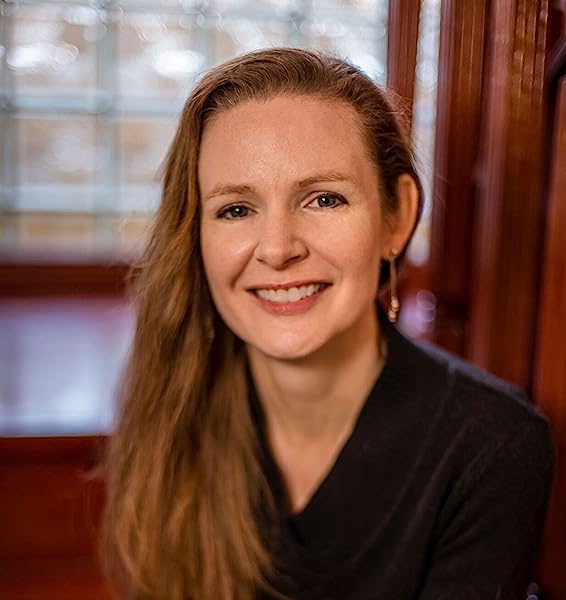 "An unexpected Gem . . . I loved the historical setting for this book and it was easy to read despite being set in a dated time." ---The Book Igloo --This text refers to the audioCD edition.

C.J. Archer has loved history and books for as long as she can remember and feels fortunate that she found a way to combine the two by making up stories. She has at various times worked as a librarian, IT support person and technical writer but in her heart has always been a fiction writer. C.J. spent her early childhood in the dramatic beauty of outback Queensland, Australia, but now lives in suburban Melbourne with her husband and two children. She has written numerous historical romances for adults. Visit her website www.cjarcher.com for a complete list. She loves to hear from readers. You can contact her in one of these ways: Email: cjarcher.writes@gmail.com Twitter: www.twitter.com/cj_archer Facebook: www.facebook.com/cjarcher.writes --This text refers to the paperback edition.

4.3 out of 5 stars
4.3 out of 5
1,014 global ratings
How are ratings calculated?
To calculate the overall star rating and percentage breakdown by star, we don’t use a simple average. Instead, our system considers things like how recent a review is and if the reviewer bought the item on Amazon. It also analyses reviews to verify trustworthiness.

Terri C
3.0 out of 5 stars Just ok
Reviewed in Australia on 1 August 2014
Verified Purchase
This book is about a girl who can see ghosts. Its set hundreds of years ago and after conducting séances with her sister an evil spirit is released. The sisters try to return the spirit to the other side by enlisting the help of a ghost. The girl falls in love with the ghost - the love story is looks, touches of the hand and in the end a kiss or two. It was ok but not something I would be telling everyone to buy
Read more
3 people found this helpful
Helpful
Report abuse

Felicity
5.0 out of 5 stars This is the book that starts it all...
Reviewed in Australia on 21 April 2017
All of Cj Archers books can be read independently of each other. So the Emily Chambers Spirit Medium series can be read separately from her Glass and Steele series.
But....this is the one that started the universe in which many readers now live in. This introduces the concept of something more than our physical plane by having someone who can talk to ghosts. It is a story of the supernatural but there is a romance thread to it as well that is what captures and sucks you in. paranormal romance is the best way to describe this series. And while it may not compare to something like 50shades for hot scenes it smoulders and simmers and doesn't detract from the story itself. For me a romance has to have substance as well as something intriguing and this first book does not disappoint. I was hooked from the get go. Try it. If you aren't wanting to read beyond this book then maybe it's not for you. But you'll find once you start you may not stop until you read to the very end. For the next book please see Possession. Highly recommend this one book. Start here. It's worth it. Possession (Emily Chambers Spirit Medium Book 2)
Read more
Helpful
Report abuse

ExodusDiva
5.0 out of 5 stars The medium
Reviewed in Australia on 22 March 2020
Verified Purchase
I have to say this is probably one of the best ghost romance out there that I have read. On top of that it is a historical book from the 1800 of old London. While I tend to avoid books from this setting, I enjoyed the little nuances of intrigue and upperclass mannerisms. It made me smile with what was considered proper conduct. The chemistry was strong between Emily (the medium) and Jacob (the assigned ghost) and their behaviour toward each, Inline with 1800 standards - so no ravishing going on. Jacob is assigned to help him track down a demon gone askew and unravelling the mystery of who is behind it. The storyline and plot was well-written and kept me glued the whole time. I'm keen to find out more and what happens next for Emily and the ghost world.
Read more
Helpful
Report abuse
See all reviews

A-Canadian-in-Singapore
2.0 out of 5 stars Ruined by an overly passive heroine
Reviewed in the United Kingdom on 18 February 2018
Verified Purchase
Gosh, this book annoyed me.

I started out wanting to like it, but the more I read, the more I hated the main character. I'm still not even certain why I read through to the finish, gritting my teeth, apart from the desperate hope it would get better. It didn't.

The flaw is simple - the heroine is completely passive. She watches things happen around her, and frets about it. She does nothing to help, to save her friends. She's weak and pathetic.

Here's a line from the book, where her love is being attacked, and the attacker's companion has taken her hostage: "I struggled against Finch but it was useless. I was so weak by comparison, so _useless_. I couldn't get to the amulet. I couldn't get away. I couldn't _do_ anything." Exactly what I've been thinking for most of the book. If you're so useless and weak and never do anything, why are you the protagonist? First rule of writing fiction is: the protagonist must protag!
Read more
4 people found this helpful
Report abuse

Sam
5.0 out of 5 stars Medium, but not mediochre
Reviewed in the United Kingdom on 30 December 2016
Verified Purchase
Warning ! Once you start reading this you wouldn't be able to stop. I read this over 4 hours. I kept trying to stop, but each time failed and picked up again immediately.

What really surprised me and nearly stopped me discovering this author was the fact this is not based in a contemporary setting. I never read period pieces, but due to the crowd pleasing nature of the writing, meaing it is humourous as well as thrilling and very, very compelling, it was easy and nice to find I liked this so much.

Emily Chambers is a medium living in nineteenth century London with her sister Celia, both are spinsters of modest means, but considerable spirit and intelligence. Therefore able to support themselves independently.

One day after returning from a seance where accidently Emily and her sister have released a demon into the world she finds the ghost of Jacob Beaufort lounging outside her house. She is subsequently told by said phantom that there is waiting place for spirits who haven't crossed over properly, and the administrators there have assigned the former man to our supernatural expert so they can track down the servant of satan and stop it killing anyone. So begins an adventure which will have you turning page after page desperate to follow our protagnoists as they struggle against society, as much as the supernatural.

However implausable the plot, the high quality of writing here keeps you hooked with the only criticism being that phrases like 'mad at you' are not common here in London now, and definitley would have been unheard of then. Not that is really matters, as this is so incidental and does not impact at all on the enjoyment of the book. I did wish a bit more was explained like Jacob's death and solidness, but understand that maybe that would wrap up a story arc too quickly, so I will downloading book 2 in this series as soon as possible.

I was really impressed by the originality of this plot and kept wishing I was watching this on screen as I think would work so well visually.
Read more
3 people found this helpful
Report abuse

malc davies
4.0 out of 5 stars Victorian London at its best.
Reviewed in the United Kingdom on 14 March 2017
Verified Purchase
Victorian London is steeped in mystery, much of it dark. This clearly allows scope for fantasy stories to abound.

Found this one a surprisingly excellent story which was very cleverly constructed and kept me enthralled from start to finish.

I was pleased to see how well and how easily the main characters became real rather than just characters in a book.

The synopsis gives you an idea of the story and I would not wish to give any accidental spoilers. What I would say is the main character Emily was to easily believable. A seance attended by Emily and her sister really starts the story and then we find a demon let lose, From this point the reader is taken on a journey involving the supernatural and the dark side of London. We are introduced to a range of excellent characters some good and a fair range of bad too. I always find the bad guys the most colourful and this story proved to maintain my view.

Found it very hard to find anywhere to take a rest from reading as the story moves on a pace and as each chapter ended I could not wait to see what would happen in the next.

Thoroughly good read. My thanks to the author.
Read more
Report abuse

4godssake
2.0 out of 5 stars Meh
Reviewed in the United Kingdom on 29 October 2017
Verified Purchase
I really wish Amazon would make it clear when a book is Young Adult however this isn't the author's fault. As a YA read this was possibly OK so perhaps it's unfair for me to only give 2 stars, but this is my personal opinion. The idea behind it is good, let down however by language and terminology that was non-existent at the time the story is set. Basically I was not transported to the time period but felt as if I was watching modern day actors in a period piece with a poorly written script! (I tend to visualise my books as films!) Too much smouldering passion, cardboard cut-out characters and not enough depth meant that I skim-read parts. I did finish the book though, which is something, but I won't be reading the next exciting episode of Emily and the Erogenous Entity nor would I look for the author again. 14 year old hormone-driven girls with a love of the paranormal may well enjoy.
Read more
Report abuse

Sarah
4.0 out of 5 stars For fans of the Necromancer Series
Reviewed in the United Kingdom on 1 November 2016
Verified Purchase
Not being a fan of the Freak House sets, but liking the Necromancer Series and The Watchmakers Apprentice, I went for a punt with this and was glad I did. I was worried about the concept due to religious reasons but fortunately the medium aspect is done with a soft touch and erring on the edge of fantasy.
The story feels a bit rushed and silly at times but I enjoyed the Detective aspect being a novice in that genre. Also some of the characters a quite generic and the plot points obvious.
Archer also slips up on the English/American language decrepencies from time to time. I.e. 'block', but this is more refined then the poorly written Freak House sets. I enjoyed the read and ploughed through the next two books.
Read more
Report abuse
See all reviews
Back to top
Get to Know Us
Make Money with Us
Let Us Help You
And don't forget:
© 1996-2021, Amazon.com, Inc. or its affiliates