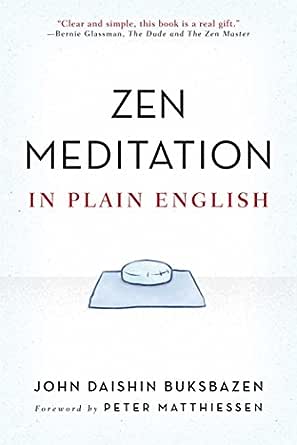 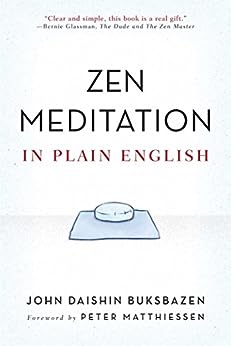 "The jolt of confidence you get when discussing a day's performance with a seasoned veteran can take any activity to a higher level. In his concise and informative Zen Meditation in Plain English, meditation veteran John Daishin Buksbazen gives detailed directions for each step of Zen-style meditation, from getting into the different postures and developing breath concentration, all the way up to intensive training periods. His focus is on getting the fundamentals right. He also offers a rare introduction to the importance and mechanics of group practice and a well-selected Frequently Asked Questions" section at the end. While Buksbazen repeatedly says that there is no substitute for a good teacher, until you find one, Zen Meditation in Plain English will do nicely."--Brian Bruya, Religion Editor, Amazon.com

"Clear, simple and well grounded in years of experience, Daishin's book is a real gift to anyone interested in Zen practice."--Bernie Glassman, founder of the Zen Peacemaker's Order

"Here is a lucid guide to the first step of any serious spiritual journey. All of the usual fat that accompanies works of this type has been trimmed away, leaving the bones and marrow--the essentials that any new practitioner needs to know to enter the way."--John Daido Loori, Roshi, Abbot of Zen Mountain Monastery

"John Buksbazen's book is an authentic presentation of a universal and timeless teaching, particularly valuable because of the practical clarity and warmth of its style."--Dennis Gempo Merzel Roshi, author of The Eye that Never Sleeps, Abbot of Kanzeon Zen Center

"John Daishin Buksbazen has brought the practice of Zen home to us all. It is as simple as stretching exercises, as intimate as counting the breaths, as uncomplicated as accepting one's self, as ordinary as enjoying one's friends."--Robert Aitken, author of Gateless Gate --This text refers to an alternate kindle_edition edition.

Sensei Daishin was born in London, England, to a Jewish-Christian family of Eastern European backgrounds. He began Zen practice in Philadelphia in 1967, receiving both lay and Priest ordination in the Korean Chogye Order of Zen from the Venerable Seo Kyung-bo. He later practiced with (then) Maezumi Sensei at the Zen Center of Los Angeles (ZCLA), where he was in residence until 1979. He served as pastoral counselor, and was publishing editor of the ZCLA Journal and the Zen Writings Series. In 1999, Daishin renewed his Priest vows with Sensei Yoshin Jordan, and returned to ZCLA to study with Roshi Egyoku. In 2003 he received Preceptor Transmission and was empowered as Dharma Holder, and subsequently received Dharma Transmission in June 2008. Sensei Daishin has a PsyD in Psychology from the Southern California Psychoanalytic Institute. He is a licensed Marriage and Family Therapist with a private clinical practice. He leads an affiliated sitting group, the Ocean Moon Sangha, in Santa Monica and teaches Buddhist psychology and zazen to mental health professionals. Daishin is the author of To Forget the Self and Zen Meditation in Plain English (Wisdom, 2002) and is co-editor with Roshi Egyoku of the On Zen Practice collection). He is married to Concetta Getsuren Alfano, a Zen practitioner, psychoanalyst and co-founder of the Center for Mindfulness and Psychotherapy. Daishin has one son.

Peter Matthiessen is a three-time National Book Award-winning American novelist and nonfiction writer, as well as an environmental activist. His nonfiction has featured nature and travel, as in The Snow Leopard, or American Indian issues and history, as in his detailed study of the Leonard Peltier case, In the Spirit of Crazy Horse. He lives with his wife in Sagaponack, New York. --This text refers to an alternate kindle_edition edition.

William Neville
2.0 out of 5 stars More "initial" than I thought it would be
Reviewed in the United Kingdom on 1 June 2020
Verified Purchase
It was OK but if you are NOT a beginner then this is quite quite basic. I will be putting it into my charity shop box having read it once
Read more
One person found this helpful
Report abuse

Daniel J Buckley
5.0 out of 5 stars A Zen Tool Kit
Reviewed in the United States on 31 March 2002
Verified Purchase
This book has been a blessing for me. My organization provides a prison outreach program for inmates,who want to learn meditation,and this is the guide we will be putting in their hands. Daishin has provided the tools that any person, beginner or experienced practioner can use. His list of Frequently Asked Questions addresses those points that some people may feel shy in asking and his illustrations of sitting positions and exercises are most useful When you read the book, you feel he is talking directly to you. His use of quotes from his teacher, the late Maezumi Roshi,brings a deeper understanding of what Zen and the practice of meditation is all about. If you could only choose one book on meditation, I would advise you to give this one serious consideration.
Read more
29 people found this helpful
Report abuse

C. Kemp
5.0 out of 5 stars Makes Meditation Approachable
Reviewed in the United States on 2 February 2014
Verified Purchase
Meditation always seemed so esoteric to me, something far out of reach. This book makes the practice learnable. If meditation is something you are interested in trying at all, I highly recommend checking out this book.
Read more
Report abuse

J. P. Cummings
5.0 out of 5 stars Simple, good starter book for Zen M
Reviewed in the United States on 16 January 2017
Verified Purchase
Good starter!
Read more
Report abuse
See all reviews
Back to top
Get to Know Us
Make Money with Us
Let Us Help You
And don't forget:
© 1996-2021, Amazon.com, Inc. or its affiliates