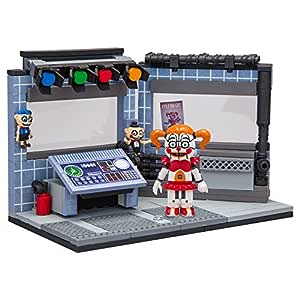 Valerie Miesel
3.0 out of 5 stars Intricate and time consuming
17 July 2018 - Published on Amazon.com
Verified Purchase
The construction of this set is not for the weary it sat on our coffee table half built for 2 weeks because my 7 year old became discouraged at the difficulty of fitting the pieces together. They are definitely not as easy as LEGOS. We have other FNAF sets from McFarlane and while they are all a little more difficult this set was extremely intricate. I finally just had to finish it for him. The set was missing the stickers as well as the “glass” pieces for the windows. I did not see an option to contact seller in regards to this issue. Overall the details of this set are pretty awesome but I wouldn’t recommend for any child 7 and under unless you secretly hope they give up so you can finish it!
Read more

ShopToo
5.0 out of 5 stars Great detail and easy assembly
21 July 2017 - Published on Amazon.com
Verified Purchase
These FNAF construction sets have great detail and are easy put together and they stay together while my kids play with them. We have over a dozen different sets and love them all.
Read more

Spaghettiman
5.0 out of 5 stars Toy Freddy gets a Toy
16 June 2017 - Published on Amazon.com
Verified Purchase
Toy Freddy isn't one of the more illustrious FNAF characters and the FNAF 2 party room itself isn't a particularly known or famous FNAF location (really the only camera anyone ever looks at in FNAF 2 is Prize Corner), but this is a great set for fans and perhaps the most well-executed of the McFarlane building sets (at least of the ones I've built). Let's jump in:

* Toy Freddy himself looks great. These sets have well-detailed figures and Toy Freddy is no exception. I'm a bit more used to seeing him in his "attack mode", where his eyes are just black orbs, but this set seems to be going along with more of a subtle feel to its creepiness than some of the others. Toy Freddy might just amount to yet another enemy in the actual game, and doesn't have any particular lore attached to him, but I've always liked his visual design, so it's good to see him well-represented. The only other toy of Toy Freddy I can think of is the Funko Pop, so this is a desperately needed figure.

* The actual room might not look like much at first, amounting to a wall and a table, but once you've got all the various decorations and stickers on, it's more visually dense than you would expect. Don't get me wrong, it's a very simple set, one of the simplest perhaps, but every element looks good and represents itself well. As with Freddy himself, there are some nice, subtly creepy effects are snuck in, too. I had never noticed that the Toy Freddy poster in the game was missing an eye until looking at this set, but the sticker is indeed accurate, and I love the grime creeping up from the floor, which I think most people might not even notice on first observation. I also appreciated the detail on the table, you get a pretty cool sticker representing the tablecloth that goes on in a specific way that still lets you attach things to the table once the sticker is applied.

* The construction process was great. I've had issues with vague instructions or awkward components in other sets, but everything was on point here. The instruction manual even goes to the extent of specifically pointing out one potentially tricky part of the build process so you're aware of it before you jump into it. Maybe this is just because of how simple the set is, but everything just worked right. I also like the design considerations taken here. Earlier sets would sometimes just have you sit things on shelves or tables without attaching them down (FNAF 1 Backstage comes to mind), but both this set and McFarlane Toys Five Nights At Freddy's Prize Corner Construction Building Kit give you things to actually attach everything to, and Toy Freddy himself even gets a stud to hold him in a standing position, which is makes it easy to move around your completed build.

While the Party Room might not be as visually dense as the Office, or as iconic as Prize room, I think it's the most cleanly executed McFarlane FNAF building set to date. I really can't think of a single hitching point or gripe. For $13, this is a solid purchase for FNAF fans.
Read more
13 people found this helpful

ShopToo
5.0 out of 5 stars Great details and easy to assemble
21 July 2017 - Published on Amazon.com
Verified Purchase
These FNAF construction sets have great detail and are easy put together and they stay together while my kids play with them. We have over a dozen different sets and love them all.
Read more

Eagle
4.0 out of 5 stars Daughter loves these sets
29 December 2019 - Published on Amazon.com
Verified Purchase
As value for money, this is a small set for the cost. Probably because I’m later in buying it and it has perhaps increased in price from suggested retail. My 7 year old loves it though and was able to easily build it herself. They are good quality and nicely detailed. The engineering which goes into making sure the assembled sets are strong isn’t quite on par with real lego. Until lego makes five nights at freddy’s sets this is our option. We will keep buying them and she will keep loving them. We have many and they are good sets, I just recommend shopping around and seeing what the fair price is.
Read more

One person found this helpful
Go to Amazon.com to see all 253 reviews 4.3 out of 5 stars
Get FREE delivery with Amazon Prime
Prime members enjoy FREE Delivery and exclusive access to movies, TV shows, music, Kindle e-books, Twitch Prime, and more.
> Get Started
Back to top
Get to Know Us
Make Money with Us
Let Us Help You
And don't forget:
© 1996-2020, Amazon.com, Inc. or its affiliates