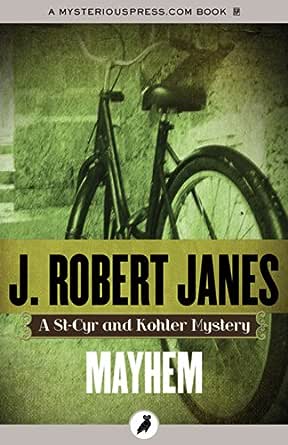 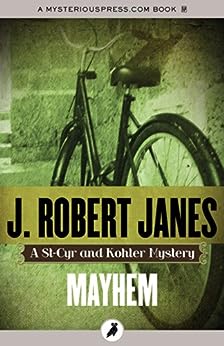 '[Janes finds] details, both homely and sublime, that define life in an occupied nation in wartime.' -- The New York Times. 'A Surete man and a Gestapo officer combine to turn 1942 Paris the seamy side out . . . The offbeat pair gel . . . fast and convincing.' -- The Oxford Times. 'A funny and exciting book, beautifully documented.' -- Louis Malle, director of Elevator to the Gallows. --This text refers to an alternate kindle_edition edition.

J. Robert Janes was born in Toronto and now lives in Ontario. A mining engineer and geologist by profession, Janes has also worked as a teacher and lecturer. Since becoming a full time writer in 1970, he has written over twenty books including novels for children and adults and a number of textbooks. --This text refers to an alternate kindle_edition edition.

Jeffrey Swystun
TOP 500 REVIEWER
2.0 out of 5 stars Tough Go
Reviewed in Australia on 21 June 2015
Everything about this series appealed to me. A police procedural set in occupied France during World War Two. The pairing of German and French detectives. Crime mixed with the Resistance. All of that is compelling. Unfortunately, in this first outing I found the writing and the plot dense and plodding. The story moves slowly and my interest waned. After reading other reviews, I discovered that most people enjoy the series but still claim the books to be "complicated", "difficult to unravel", "confusing", "long-winded". Still, many stick it out and become comfortable with Janes' cadence and style. I will give the next one a go and hope that happens to me.
Read more
Helpful
Comment Report abuse
See all reviews

S Riaz
4.0 out of 5 stars Mayhem - 1st St-Cyr and Kohler Mystery
Reviewed in the United Kingdom on 11 July 2012
Verified Purchase
I have long been a fan of this series, so am delighted that not only have they been released on kindle, but that there is a new book announced after a long wait. Jean-Louis St-Cyr is a detective in occupied Paris, discovering burning files when the Gestapo roll in. Despite this, he is allowed to continue his work and is now partnered with German detective Hermann Kohler. They are partners, but not equals, as Kohler has control of St-Cyr's weapon and, which probably rankles more, his car.

These books take the interesting premise of who investigated crimes during wartime and when the body of a young boy is found in a forest, the two are sent to solve the murder. St-Cyr thinks it is a crime of passion, but there are complications - the discovery of a handbag containing diamonds and the interest from Berlin about what seems "a nothing little murder". What complicates matters even more are the missing negative of a crime scene photograph showing the two detectives together, when the Resistance is looking for evidence of complicity with the enemy. As the two detectives track the crime from a nightclub, to a chateau, to an abbey and there is involvement from the SS, the Gestapo and the army, it is seems this crime may lead the detectives directly to the Russian front, in Kohler's case, or forced labour in that of St-Cyr.

There are several books in this series, the next being

Carousel: A St-Cyr and Kohler Mystery . Each novel leads on to the next and they are best read in order, in my opinion. These are not easy reads - they are often quite complicated and hard to unravel. If you like the author's style, then you will find yourself immersed in his world, but if you do not then you might find the novels simply confusing and long winded. As these are on kindle, I would suggest taking advantage of the ability to download a sample and try reading a few pages before buying the book. Hopefully, you will like these novels as much as I do, as they are something quite unique and I am delighted to find them available again after being out of print for too long.
Read more
2 people found this helpful
Report abuse

Consumer LB
4.0 out of 5 stars German occupied Paris cop story
Reviewed in the United States on 21 July 2017
Verified Purchase
Several complaints about clarity in point of view (who the hell is speaking), but setting and characters well done with compelling storyline. It was funny, culturally intriguing and held my interest.
Read more
3 people found this helpful
Report abuse

Claire Y. Hunt
4.0 out of 5 stars Not for everybody but good
Reviewed in the United States on 26 March 2013
Verified Purchase
Excellent for describing Paris during WW II. The two main characters are lovable and believable. Jane'splots aren't the easiest to follow but it may be the reader?
Read more
One person found this helpful
Report abuse

Amazon Customer
5.0 out of 5 stars good
Reviewed in the United States on 4 May 2015
Verified Purchase
Fast service, good read
Read more
Report abuse
See all reviews
Get FREE delivery with Amazon Prime
Prime members enjoy FREE Delivery and exclusive access to movies, TV shows, music, Kindle e-books, Twitch Prime, and more.
> Get Started
Back to top
Get to Know Us
Make Money with Us
Let Us Help You
And don't forget:
© 1996-2020, Amazon.com, Inc. or its affiliates