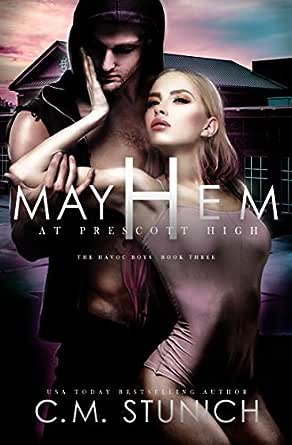 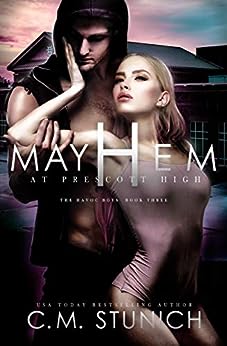 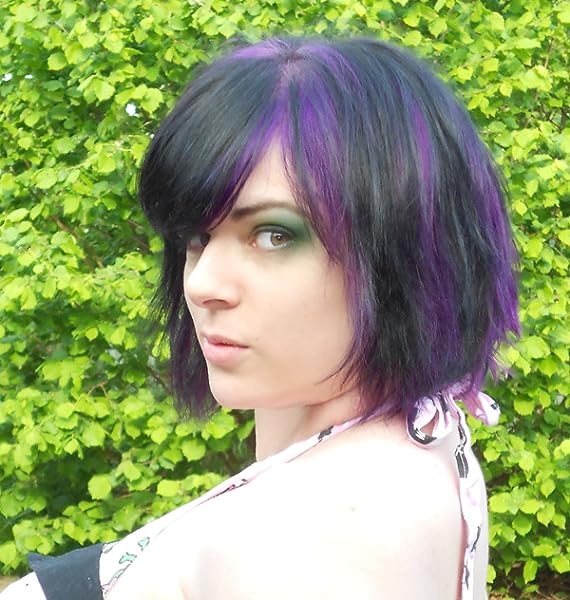 Robyn
TOP 1000 REVIEWER
5.0 out of 5 stars The plot thickens
Reviewed in Australia on 5 August 2020
Verified Purchase
What I love about this series, is just when you think you've got the main villain worked out, the author throws a spanner in the works and throws you off balance. The emotion conveyed in this series is incredible. It's brutal, heart warming and devastating all at once, which is confusingly brilliant, as it gives you a real sense of what the FMC must be experiencing. As with it's predecessors, Mayhem is packed full of violent action, righteous anger, passionate relationships and burning vengeance. It flows really well and is a total page turner, you can't put it down. Bring on Anarchy and Victory!
Read more
Helpful
Comment Report abuse

Krystal
5.0 out of 5 stars 🖤Consuming🖤
Reviewed in Australia on 4 August 2020
Verified Purchase
Every time I read a new book from c.m.stunich, I desperately need more. These books make me feel insatiable.
Mayhem is everything, the havoc books are everything. Everything I never knew I desperately needed. The familiarity of these characters to my own inner demons and consuming darkness is palpable. All of HAVOC, every one of them, leaves me with a deep feeling of understanding, and it's both terrifying, yet beautiful.
I can't wait for more...
The darkness is addictive.

Sarah Jane Duncan
5.0 out of 5 stars Mayhem has ruined me… and I LOVE IT!
Reviewed in Australia on 5 August 2020
Verified Purchase
Book 1, Havoc hooked me in. Book 2, Chaos left me craving more. Book 3 Mayhem has ruined me… and I LOVE IT!
CM Stunich somehow manages to make each book better and better. Her way with words and ability to still shock me (in a good way) has me completely lost in the world of Prescott High. My real life be damned!!
Bernadette Blackbird and her Havoc boys have seared their brand on my heart. I am absolutely counting down for the release date of book 4, Anarchy on August 27th!! Until then, I will dream about them daily :)
Read more
Helpful
Comment Report abuse

Dianne Kaplan
5.0 out of 5 stars It's brilliant! I feel like a broken record just read it!
Reviewed in Australia on 4 August 2020
Verified Purchase
I feel like I am getting repeatative, but this series just does it for me, never a dull moment, I can never predict what will happen and seriously it's just brilliant. Warning....cliffhanger totally worth it!!
Read more
Helpful
Comment Report abuse

SamMac
TOP 500 REVIEWER
5.0 out of 5 stars Highly recommend
Reviewed in Australia on 3 August 2020
Verified Purchase
I not only love Mayhem but this series.
What drew me in is the storyline and the world the author has created.
The twists, turns, working out the who's/whys etc.
Highly recommend!!!
Read more
Helpful
Comment Report abuse

Georgina
5.0 out of 5 stars I am so happy the series has been extended!!!!!!!! CM You are AMAZING
Reviewed in Australia on 31 July 2020
Verified Purchase
I COULDNT PUT IT DOWN!!!!!
OMG this book is one of the favourites so far, i loved the POVs from the guys.
I love C M so much that she has extended the series instead of finishing up here. I cannot wait for the next two books and all the crray thats coming.
Read more
One person found this helpful
Helpful
Comment Report abuse

Kindle Customer
5.0 out of 5 stars Blown away
Reviewed in Australia on 6 August 2020
Verified Purchase
Awesome as always but already poking my eyes out for the next! I dont know if my heart can take the waiting lol
Read more
Helpful
Comment Report abuse

Loz83
4.0 out of 5 stars The Sexual Exploits Of Bernadette Blackbird continues
Reviewed in Australia on 5 August 2020
This book should have been called
‘The Many Sexual Exploits Of Bernadette Blackbird’
Because, a LARGE part of the storyline revolves around Bernie and the boys from Havoc
Hael
Aaron
Victor
Oscar
Callum
Of course this third book picks up where the second ended, and the first few chapters revolve around the newlyweds.
Victor and Bernadette, who are on their honeymoon, not by themselves of course, they have all the other Havoc boys with them.
However, Victor and Bernie don’t allow the other four guys to cramp their style as they screw their way through most of the first half of the story.
This means the backstory around the Havoc guys ongoing battle for gang supremacy with the ‘Charter Crew’ in on the back-burner while Bernadette comes to a resolution (of sorts) with the new hubby to share her with the other guys of Havoc.
Bernie wastes no time establishing herself within the gang. Gettin, down and dirty with all the guys on a kinda rotation system. This is because she LOVES them all, and they are the only REAL family she’s even had.
And when you have lusted after four different guys since you were eight (no that doesn’t sound right)
Since you have WANTED to be part of the guys gang since you were eight. Then, you have to sleep with them all ...right?
Almost all the guys are onboard, (of course. They’re guys) and before you know it Bernie is like their saviour, she’s exorcising their demons. Pulling their horrible broken stories from them and F’ ing them like crazy...Saint Bernadette.
Well, all except that pesky Oscar. He’s holding out on Bernie and, she not happy. Ever since they first got together and had disgusting period sex (once. Book #2) and Oscar didn’t hold her afterwards,telling her how wonderful she is(like the other guys) and ran away.
She didn’t even get a chance to find out all his darkest secrets so she could act like his therapist and get to know him.

Bernie started to irritate me in this book.
She came across (at times)
Arrogant
Petulant
Full of her own self importance.
For a character that’s the heroine in this story, why did I want to see her fall flat on her face sometimes?
She seemed to be getting too big for her boots.

We got page after page of Bernadette’s sex obsessed feelings towards the guys.(and their sex bodies that got her panties wet)
No sooner had she left one guys bed, when she was obsessing and hopping over to the next one.
How many time was this girls ‘skin prickling with need’
How they managed to get any school work done, let alone chase gangs member with all the screwing in beyond me.
(And C.M Stunich Loves herself a good graphic sex scene)

I kind of guessed this was the direction this book was heading in as this author writes RH book all the time.
However,the many relationship storyline’s took away from the actual plot.
The gang rivalry. The child sex trafficking, the involvement of the adults...it was to few and far between.
Once we kinda, sorta got the Oscar business put to bed (pun intended....and boy, was she relentlessly trying to get at him! Couldn’t handle a little rejection could she.)things got a little more on track towards the end.
Cliffhanger anyone???

Anyway, out of all the guys I hope Bernadette eventually runs off with Aaron, with Victor fuming! and on their tail.
And, if any of them are going to end up dead...my monies on. Oscar or Callum ....Or,...will it end up like her other books with the HEA ...all living in the same house together...Four Stars
Read more
Helpful
Comment Report abuse
See all reviews from Australia
Get FREE delivery with Amazon Prime
Prime members enjoy FREE Delivery and exclusive access to movies, TV shows, music, Kindle e-books, Twitch Prime, and more.
> Get Started
Back to top
Get to Know Us
Make Money with Us
Let Us Help You
And don't forget:
© 1996-2020, Amazon.com, Inc. or its affiliates