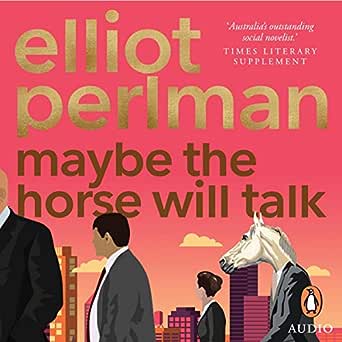 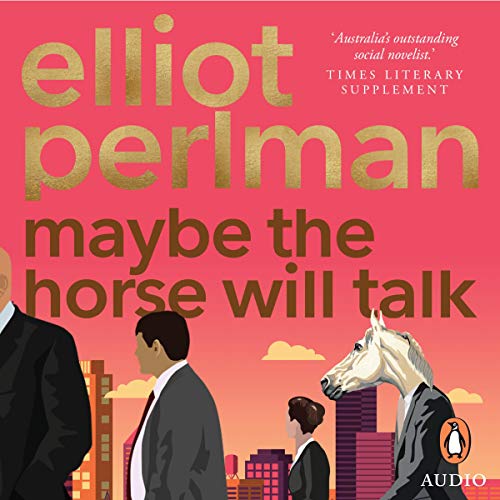 Maybe the Horse Will Talk

Margaret Jaffé
4.0 out of 5 stars Clever , interesting story
10 January 2020
Format: Kindle EditionVerified Purchase
Like all of Perlman's books , this is beautifully written. Character portrayal is very good.
The plot has a couples of aspects which make it interesting. The title ,which is soon explained
is apt. I would also recommend The street sweeper.
Margaret

Amazon Customer
5.0 out of 5 stars Lawyers and cover up
8 November 2019
Format: Kindle EditionVerified Purchase
Yes like the book. Covers sexual cover up as main theme. Lots of coïncidents. Set in Melbourne but could be in any western country. Ending open just like the workplace.
Read more
One person found this helpful
Helpful
Comment Report abuse

shags2207
4.0 out of 5 stars Not one for lawyers
12 October 2019
Format: Kindle EditionVerified Purchase
A witty and well constructed story with some witty and interesting twists and turns. Portrayal of the legal industry and senior lawyers is less than flattering and entirely believable.
Read more
One person found this helpful
Helpful
Comment Report abuse

BernT
4.0 out of 5 stars Readable
11 February 2020
Format: Kindle EditionVerified Purchase
I can’t say I loved it but I also didn’t hate it. I am ambivalent about it and its themes.
Read more
Helpful
Comment Report abuse

Jennifer Cameron-Smith
TOP 10 REVIEWER
5.0 out of 5 stars 'I am absolutely terrified of losing a job I absolutely hate.'
11 December 2019
Format: Kindle Edition
Stephen Maserov used to be a teacher. He retrained as a lawyer to try to give his family financial security. He’s now a second-year lawyer for a big corporate law firm, Freely Savage Carter Blanche where he’s working impossible hours to try to make budget. His wife Eleanor, who supported him in his career move, has asked him to move out of the family home because of the hours he works. Sigh. So, there’s Stephen, working in a job he knows he hates, generating income to pay a mortgage for a home he can’t live in, supporting his wife and two small children. And, if that’s not enough stress, he isn’t sure that he’ll make it into the ranks of the third-year lawyers.

Stephen is both desperate and resourceful. He needs to keep his job to pay his mortgage and he wants to salvage his marriage. He sees and seizes an opportunity.

‘Under the right circumstances, I can make your horse talk.’

Torrent Industries is a major client of Freely Savage Carter Blanche. Stephen manages to get himself seconded there for a year on the basis that he can make some claims of sexual harassment go away.

Can Stephen do this, and how?

To write more about what Stephen does (and how) could ruin the story for an intending reader. Suffice to say, Stephen is walking a tightrope here. Can he survive and maintain an ethical position? Will he be able to expose the corrupt corporate world of which he is a part? And what about his marriage?

I thoroughly enjoyed this novel, with its descriptive prose and its humour. I admired the way in which Mr Perlman explored several contemporary issues.


Read more
One person found this helpful
Helpful
Comment Report abuse
There are 8 customer reviews and 14 customer ratings.
See all 8 customer reviews
Write a customer review
Get FREE delivery with Amazon Prime
Prime members enjoy FREE Delivery and exclusive access to movies, TV shows, music, Kindle e-books, Twitch Prime, and more.
> Get Started
Back to top
Get to Know Us
Make Money with Us
Let Us Help You
And don't forget:
© 1996-2020, Amazon.com, Inc. or its affiliates