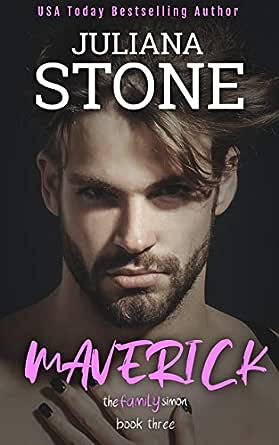 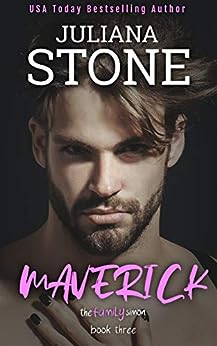 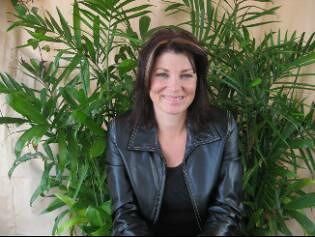 4.6 out of 5 stars
4.6 out of 5
79 global ratings
How are ratings calculated?
To calculate the overall star rating and percentage breakdown by star, we don’t use a simple average. Instead, our system considers things like how recent a review is and if the reviewer bought the item on Amazon. It also analyses reviews to verify trustworthiness.

Sandy S.
4.0 out of 5 stars Emotional
Reviewed in Australia on 3 April 2015
MAVERICK is the third installment in Juliana Stone’s adult, contemporary The Family Simon romance series focusing on the Simon Family. This is music composer and writer Maverick Simon, and mechanic Charlotte (Charlie) Samuels’s storyline. MAVERICK can be read as a stand alone without too much difficulty but some of the previous storyline scenarios are beginning to cross between installments.

Told from third person perspective, the storyline focuses on Maverick ‘Rick’ Simon as he takes some personal time at his brother’s place in Fisherman’s Landing, Maine. While his best friend and music partner Donovan James-Simon (JACK books 2) and husband Jack Simon await the birth of their first child, Rick finds solace in the winter solitude of Maine. Hoping to find someone to fix his brother’s wayward snowmobile, Rick will be introduced to Charlie Samuels-the town’s only female mechanic-and the woman who would steal Maverick’s heart.

MAVERICK is an ensemble storyline with many of the Simon family siblings and cousins front and center in the family business- a family that closely resembles the Kennedys including the political elite, the rich and famous, the superstars and military heroes. Maverick is a song writer whose hit a road block, of sorts, and finding Charlie Samuels has lifted the block and lightened his heart. But like all ‘Kennedy’ style families, tragedy will befall the Simon Clan, and Rick finds himself torn between what he knows he must do and where he wants to remain. Rick’s cousin Teague deserves his happily ever after, but getting there will be even more dramatic and intense than previous storylines.

MAVERICK is another emotional and moving storyline of family and love. The characters are engaging, colorful and charismatic; the storyline is enjoyable, passionate and encouraging. There are no hidden demons or exes making life miserable but Rick keeps his true identity a secret far longer than he should have.

aysha
5.0 out of 5 stars amazing
Reviewed in the United Kingdom on 21 February 2015
Verified Purchase
I can't get enough of the Simons and each book we get introduced to a more complex and intriguing Simon. I can't wait to see what Teague"s story is and where it heads.
Maverick seemed like a real trouble maker in the last book so it was actually really lovely to read about him and charlie is the right person to make him fall to his knees. How strong and independent and lovely she is and how humble. Its so nice to see then together and despite the differences they complement each other really well.
Read more
One person found this helpful
Report abuse

Sue
5.0 out of 5 stars WOW
Reviewed in the United Kingdom on 22 February 2015
Verified Purchase
Brilliant, the Simon boys are something else. Everyone of them are sex on legs males. Maverick is so sweet and caring in this story he is every woman's dream man. Charlie has a heart of gold, and deserves some happiness in her life. Well worth reading, and you get to read about the other Simon boys and what is going on in their lives.
Read more
Report abuse

Maureen Aldridge
5.0 out of 5 stars Goody
Reviewed in the United Kingdom on 19 February 2015
Verified Purchase
LOVED all these books about the Simon MEN delicious all of them and of course the spin off the barker triplets. Maverick and Charlie s story was great sexy sexy can't wait for the next one. Thankyou Juliana GREAT writing. Roll on BOOK four.
Read more
Report abuse

Mrs. T. A. M. Gray
5.0 out of 5 stars Awesome main man and an all inspiring leading lady!
Reviewed in the United Kingdom on 9 April 2015
Verified Purchase
Lovely read with an awesome main man and an all inspiring learning lady. It's a love story that I couldn't put down and enjoyed it cover to cover. Looking forward to Teagues story and I hope that Cooper will get his eventually. Well done Juliana!
Read more
Report abuse

Gem-gems
5.0 out of 5 stars Love it
Reviewed in the United Kingdom on 20 September 2020
Verified Purchase
I enjoyed this instalment as much as the rest. The style of writing, the characters that have come to life
Read more
Report abuse
See all reviews
Back to top
Get to Know Us
Make Money with Us
Let Us Help You
And don't forget:
© 1996-2021, Amazon.com, Inc. or its affiliates