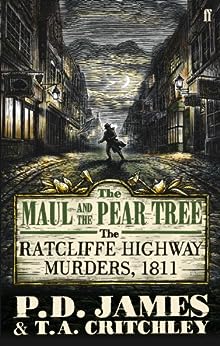 The Maul and the Pear Tree: The Ratcliffe Highway Murders 1811 Kindle Edition

P. D. James was a bestselling and internationally acclaimed crime writer. She was the creator of Adam Dalgliesh and Cordelia Gray, and their long and successful series of mysteries. Her works include Cover Her Face (1962), An Unsuitable Job for a Woman (1972), Innocent Blood (1980), Children of Men (1992), and the Jane Austen-inspired Death Comes to Pemberley (2011). James was born in Oxford in 1920. She won awards for crime writing in Britain, America, Italy and Scandinavia, including the Mystery Writers of America Grandmaster Award. She received honorary degrees from seven British universities, was awarded an OBE in 1983 and created a life peer in 1991. In 1997 she was elected President of the Society of Authors, and stood down from this role in 2013. --This text refers to an out of print or unavailable edition of this title.

4.1 out of 5 stars
4.1 out of 5
98 global ratings
How are ratings calculated?
To calculate the overall star rating and percentage breakdown by star, we don’t use a simple average. Instead, our system considers things like how recent a review is and if the reviewer bought the item on Amazon. It also analyses reviews to verify trustworthiness.

Cleopatra
3.0 out of 5 stars A plausible conclusion
Reviewed in the United Kingdom on 18 August 2015
Verified Purchase
Why are murders committed in the East End of London in 1811 still of interest over 200 years later? Well the brutal murders of two entire households are in part, at least, responsible for the birth of the Police Service that we have today.

One December night in 1811 an intruder entered the Marrs Draper store and murdered all the occupants including Timothy Marr the owner’s baby son. The only member of the household to survive was the servant Margaret Jewell who had been running an errand for oysters at just before midnight. Ratcliffe Highway was in the East End which led to the intersection between two other main roads. The area was watched by the night watchmen but he missed the entry of the intruder and help was only called when Margaret, having returned empty-handed, was locked out of her home.

This murder alone caused enough consternation between the locals, particularly as anyone with stained or torn clothes were arrested and seemingly just as quickly released by the complicated separate three police forces that had responsibility for the area. When another household were slain action and more importantly reform was called for.

The authors wrote this book in 1971 when interestingly T.A. Critchley, a Police Historian, name preceded that of the now much loved writer P.D. James. This book isn’t of the ilk of The Suspicions of Mr Whicher, the writing coming across as much more scholarly in the more traditional format of the known facts being presented with the alternative solution to the murderer being presented in the latter part of the book. Despite extensive research it appears that not a lot of the facts survive although there are plenty of contemporary accounts as the murders fed the imagination of the population well outside the East End of London. In addition there were no detectives and those charged with enforcing the police were by all accounts open to bribes or pressure from those far more powerful than them. In order to proceed to the conclusion the reader needs to wade through quite a dense prose which isn’t written with the lightest of touches. There was a feeling that some points were overly emphasised in order to persuade the reader of their truth and to be honest I don’t believe there are enough facts to accurately surmise what happened that night.

What makes this book worthwhile is the social history that accompanies the dreadful facts. The authors do a fantastic job of describing this area of Wapping with its shipyards and shadowy streets where the shops and public houses opened well into the night. The boarding houses that were temporary homes for the sailors when they were on shore and the petty rivalries and jealousies that breed in such situations. The women who when making statements were perhaps carrying out their husband’s bidding were carrying out their pre-ordained roles, the fact that those who should have been depended upon in such an event were perhaps sleeping (or worse) while earning their pittance of a wage all played a part on those December nights.

So what did I make of the author’s conclusion? It seemed plausible based on the little known facts and I concur that the murderer probably wasn’t the man who was blamed for the crimes. But of course the lasting legacy was the recognition that England needed something a bit more substantial and accountable than those currently policing the country.

I’m glad I know more about this oft referenced crime, I now understand why it is still mentioned so frequently and as a bonus I finally have an idea where The Ratcliffe Highway is, why the maul was important, and what a maul is!!
Read more
3 people found this helpful
Report abuse

Kirstine
4.0 out of 5 stars A detailed analysis of an old crime
Reviewed in the United Kingdom on 15 May 2011
Verified Purchase
This must have been one of PD James first excursions into detective writing having originally been written in 1971. She and her co-writer try to reconstruct and analyze the evidence from a couple of savage multiple murders that happened in 1811 in London's East End within one month of each other. The book starts with an atmospheric and lively description of life in the area and then proceeds into a very detailed account of the amateurish attempts by local magistrates to solve the crime. By today's standards the lack of detective expertise is shocking, but with no police force trained to gather evidence it's not surprising. The narrative is realistic in that the stalled investigation meant that the powers that be were going round in circles trying to find clues and culprits, but I found myself getting a little bored after 200 or so pages as the story meandered in detail. The ending of the book is concerned with the author's attempts to solve the crime but with little success.

The strength of the book is as an historical record of how primitive were the processes of detecting crime and the paucity of protection for people accused of a crime.
Read more
8 people found this helpful
Report abuse

Chris
5.0 out of 5 stars Fascinating study of these gruesome murders
Reviewed in the United Kingdom on 7 July 2015
Verified Purchase
This is a detailed account and commentary on the gruesome murder of two households, examining the evidence how the inadequate authorities came to their conclusions at the time. It is also a commentary on the part played by human error when there are no checks and balances in place and information is not shared by disparate agencies. The authors' attention to detail, observations, analysis and careful speculation on who committed the murders make this a really good read. It also contains very interesting facts about the state of 'policing' at the time.
Read more
One person found this helpful
Report abuse

Alan M
5.0 out of 5 stars A memorable history of a landmark crime.
Reviewed in the United Kingdom on 19 June 2016
Verified Purchase
Intelligent, detailed, poignant and thoroughly engrossing.
Reads like the best fiction but is, in fact wholly factual.
London is a rare city indeed to have 2 such landmark crime cases: the Ratcliffe Highway murders and the Ripper murders.
Read more
2 people found this helpful
Report abuse
See all reviews
Back to top
Get to Know Us
Make Money with Us
Let Us Help You
And don't forget:
© 1996-2021, Amazon.com, Inc. or its affiliates