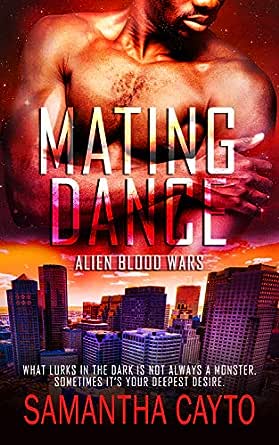 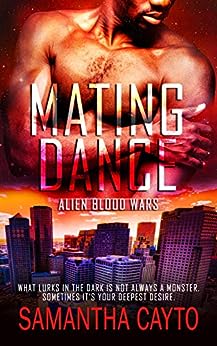 What lurks in the dark is not always a monster. Sometimes it’s your deepest desire.

Trey Duncan’s career as a Boston cop has taken an unearthly turn. He’s become embroiled in an alien war being fought on his planet. Each battle they win is a short-lived reprieve. As he helps his new vampire-like friends save his own people, he can’t help but become emotionally involved, especially when it comes to the disturbingly appealing Demi. A hybrid of human and alien, the boy is both older and younger than he seems. To Trey, he remains a temptation he must resist.

Demi is a young man caught between two species and cultures. While his fathers have always kept a tight rein on him, he is starting to break away from their control. He knows what he wants, and from the moment he set eyes on Trey, he knew that the cop was the man for him. Since the last battle, he finally has hope that Trey feels the same way.

Biology forces both their hands, but Trey and Demi are still worlds apart in what they see as their future together. When their enemy’s legacy comes back to haunt them, it’s up to them to lead the way.

Terri
5.0 out of 5 stars Couldn't wait!
22 March 2019 - Published on Amazon.com
Verified Purchase
I couldn't wait for this book to come out and I read it in one sitting. I have absolutely loved this series. The entire premise of these stories is just amazing to me. I love the whole alien vampire thing and I've been waiting anxiously for this book to come out since I finished the last one. I love Demi and Duncan both. I really wanted to know how old Demi was and we get to finally find out and I'll be the first to say I was totally shocked! I knew he was older than we knew but I had no idea it would be that old. The whole way that played out was quite funny and I was smiling the entire time I read that scene between Demi's fathers and Duncan. I love how much Demi loves Duncan and just assumes their life is going to begin and going to be a certain way and just swoops in and tries to bowl him over. Poor Duncan doesn't stand a chance really. Of course there is another bad guy introduced. I was wondering who would show their head first because we know from the last book there are several of the bad guys still alive. You know pretty early in the book that one of them are in town raising heck but you don't know who until almost the end. Dafydd is in the book quite a bit and he's really healing. I won't say more than that. There is no hint as to who will be in the next book so I'm left wondering who it will be about. We have Willem and that little girl of his and also Dafydd and Pax, so who will the next book be about and when will it be out? I'm already anxious! And that I say makes a good book! When your readers are anxiously waiting for the next book, you've written a great book!
Read more

C.R.
5.0 out of 5 stars Another great book in this series!
8 April 2019 - Published on Amazon.com
Verified Purchase
Knowing this was going to be about Demi and Trey, I was eager to see how it would all work out. Trey is having quite the internal struggle because of how young Demi looks (he's actually over 100 years old though!) and how the outside world will perceive the relationship. Meanwhile, Demi is all for it, constantly thinking about Trey and what life they could have together. Even Demi's parents are planning his "ceremony" to initiate him into the alien culture's terms of manhood, with Trey's involvement of course.

Of course, someone has to cause trouble in the town, which the group learns is connected to Dracul. The "fight" was a bit short on that account, which was disappointing, but it did help Dafydd heal emotionally a little bit.

I'm wondering where or if the series will continue on from here. I can see another story line with Dafydd, but who knows.

Anne Shure
5.0 out of 5 stars The beginning of the end?
4 April 2019 - Published on Amazon.com
Verified Purchase
I was really hoping that this would be the last book in the series, as I was concerned that it was time to call it a wrap. But this book, while a bit different than the others, convinced me that I was premature in my assessment. While Trey and Demi’s relationship is the central plot point, there’s a lot of other stuff happening in Boston, including a new murder for Trey and Karl to solve, Dafydd’s recovery, and the reopening of the club. The other aliens and their boys also make some appearances here. Overall, this was a solid, moving-the-plot-along book with action, tension, and some sexy times.

(Unfortunately, this book ended at 93%—although I do recommend the series that’s previewed at the end.)
Read more

Jennifer L.
5.0 out of 5 stars Fantastic as always!!
26 November 2019 - Published on Amazon.com
Verified Purchase
Trey and Demi have been circling each other for several books and it’s so good to see them finally get their story. I loved every moment of it, and seeing the other characters interact with them was fun. Even though it was short, the epilogue with Henry and Lucien warmed my heart. So sweet!
Read more

Erica L Chilson
5.0 out of 5 stars 5 Stars
25 June 2019 - Published on Amazon.com
I received a free copy of this title to read and review for Wicked Reads

Mating Dance is the 5th installment in the Alien Blood Wars series. If you're new to the series, I strongly suggest reading Blood Dance first, then reading the series in order, because everything ties together.

We've watched hybrid Demi grow up over the past 4 books, going from a spoiled brat to a selfless young man who saved Daffyd's life. With a massive crush on Detective Trey Duncan, Demi has an uphill battle of independence, because his fathers don't want him to grow up and his crush doesn't see him as a grown man.

Trey is struggling with his reaction to the feeding at the end of the previous novel. Being a middle-aged human, Trey feels like a pervert for the affection and desire he feels toward Trey, seeing the young man as the age of his emotional maturity, not how many years he's been on this earth.

For 4 books, we've witnessed this mating dance, and it's finally time for the payoff. The reason for the ceremony was ingenious, pushing Trey and Demi into each other's arms. The angsty gut-punches after the fact were pure yumminess.

Nothing but slow-burn connection, as Demi comes into his own and Trey learns Demi's true value, amidst a mystery featuring one of Dracul's remaining hybrids.

Then there is Daffyd, seeding his future installment, which only whets our appetites for more and more of this guilty pleasure series of pure escapism. Added with the added angst of Alex pushing Quinn to go to college, underestimating his boy's desires.

At the end of every novel, I'm left wanting more from the entire cast of characters, which is why I eagerly hand out a rare 5-star rating. These novels are treats for me- all of Samantha Cayto's novels.
Read more
Go to Amazon.com to see all 6 reviews 4.8 out of 5 stars
Get FREE delivery with Amazon Prime
Prime members enjoy FREE Delivery and exclusive access to movies, TV shows, music, Kindle e-books, Twitch Prime, and more.
> Get Started
Back to top
Get to Know Us
Make Money with Us
Let Us Help You
And don't forget:
© 1996-2020, Amazon.com, Inc. or its affiliates