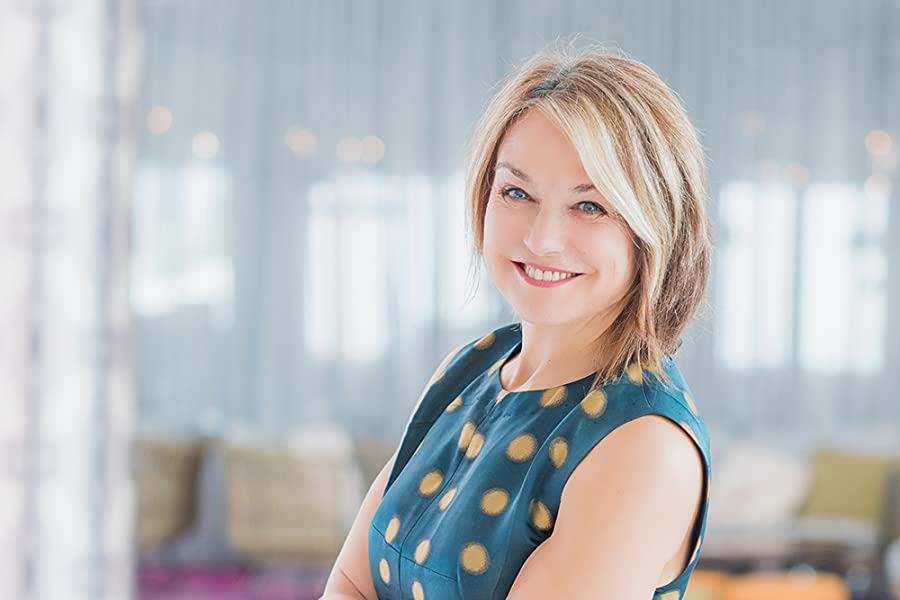 by Esther Perel (Author)
4.6 out of 5 stars 2,833 ratings
See all formats and editions
Sorry, there was a problem loading this page. Try again.

"A charming blend of wit and wisdom...this book will give you a fresh perspective on long-term love."--Gold Coast Bulletin (Australia)

"An excellent book, full of provocative prose and entertaining case illustrations."--Journal of Sex and Marital Therapy

"Her advice is refreshingly counterintuitive."--Salon.com

"Mating in Captivity...articulates a poignant and unacknowledged modern crisis for the first time."--The Evening Standard (London)

"So honest it hurts."--Irish Times

"This is a brave book...refreshing."--The Times Higher Education Supplement

Drawing on more than twenty years of experience as a couples therapist, Perel examines the complexities of sustaining desire. Through case studies and lively discussion, Perel demonstrates how more exciting, playful, and even poetic sex is possible in long-term relationships. Wise, witty, and as revelatory as it is straightforward, Mating in Captivity is a sensational book that will transform the way you live and love.

Psychotherapist and New York Times bestselling author Esther Perel is recognized as one of today's most insightful and original voices on modern relationships. Fluent in nine languages, she helms a therapy practice in New York City and serves as an organizational consultant for Fortune 500 companies around the world. Her celebrated TED Talks have garnered more than 30 million views and her international bestseller Mating in Captivity: Unlocking Erotic Intelligence is a global phenomenon that has been translated into nearly 30 languages. Her newest book is the New York Times bestseller The State of Affairs: Rethinking Infidelity. Esther is also an executive producer and host of the popular podcasts Where Should We Begin? and How's Work? Learn more at EstherPerel.com or by following @EstherPerelOfficial on Instagram.
Read more
Start reading Mating in Captivity on your Kindle in under a minute.

4.6 out of 5 stars
4.6 out of 5
2,833 global ratings
How are ratings calculated?
To calculate the overall star rating and percentage breakdown by star, we don’t use a simple average. Instead, our system considers things like how recent a review is and if the reviewer bought the item on Amazon. It also analyses reviews to verify trustworthiness.

James Champness
5.0 out of 5 stars Must read
Reviewed in Australia on 29 December 2017
Verified Purchase
I thoroughly enjoyed this book and would recommend it to everyone. Esther has the ability to explain the phenomena of desire and love with such insight and clarity. This book will challenge what you thought you knew about relationships.
Read more
3 people found this helpful
Helpful
Report abuse

Kindle Customer
5.0 out of 5 stars Wonderful insights in self (and sex)
Reviewed in Australia on 5 March 2018
Verified Purchase
I enjoyed Perel's book immensely, and found myself reflecting on my self far more broadly than just sex and relationships. It challenged me to have a look at the narrative I'm constructing through my behavioural patterns, and think about if it's authentic or just easy.
Read more
2 people found this helpful
Helpful
Report abuse

Soronaa
5.0 out of 5 stars A New and Refreshing Look at Loving Relationships
Reviewed in Australia on 5 July 2020
Verified Purchase
A must read for anyone in long-term relationship and for counsellors and psychotherapists.
Read more

5.0 out of 5 stars A New and Refreshing Look at Loving Relationships
By Soronaa on 5 July 2020
A must read for anyone in long-term relationship and for counsellors and psychotherapists.
Images in this review

Nick Ritchie
5.0 out of 5 stars Transformed my beliefs on passionate marriage
Reviewed in Australia on 6 April 2017
Verified Purchase
I was curious to learn how to keep passion alive in a marriage and if it could be done. I learned about sexual and intimacy compatibility and why that's important. I know this book will change the way I approach my marriage, for the better.
Read more
2 people found this helpful
Helpful
Report abuse

Shannen
5.0 out of 5 stars Great read
Reviewed in Australia on 27 May 2017
Verified Purchase
Raised many topics I had been pondering in a thoughtful and thorough manner. It was easy to read and I enjoyed it immensely
Read more
Helpful
Report abuse

Amazon Customer
5.0 out of 5 stars Well researched and unbiased
Reviewed in Australia on 30 March 2016
Verified Purchase
Well researched take on a complex topic. She has the breadth and depth with a variety of couples from diverse backgrounds and challenges.
Read more
One person found this helpful
Helpful
Report abuse

Sandy
5.0 out of 5 stars Must!! read for any relationship
Reviewed in Australia on 26 June 2015
Verified Purchase
One of the best books my husband and I have read I would recommend it to anyone in a relationship ..
Read more
2 people found this helpful
Helpful
Report abuse
See all reviews

Brian Richards
4.0 out of 5 stars Highly Recommend
Reviewed in the United Kingdom on 12 September 2018
Verified Purchase
Gets to the heart of the matter in rather frank ways that some authors skirt around or dither about. There's an age old clichés about marital problems occurring because of a lack of communication, and the basis of the book seems to be just that; problems occur because couples just don't tell each other what's really going on in their minds. This can be for all sorts of reasons - fear of criticism, fear of looking weird or stupid, protecting someone else's feelings, presumption about what the other partner wants, or just plain lack of awareness.
Perel shows that many of our hopes, fears, desires and fantasies are not that weird at all, in fact they're more common than we realise and are mostly part of a normal, healthy mindset. Its just that we've been conditioned down certain routes and traditions of whats acceptable and what isn't. So much so that we don't always feel comfortable disclosing our needs and desires to even the closest person to us.
In some of her many talks that appear on youtube, Perel often hints at questioning whether monogamy is for everyone or whether its realistic at all. In the book, in one of the later chapters, she spells out her view more clearly... that monogamy is just as much a choice as any lifestyle choices, and although it's a model that fits many people, that it should not be regarded as the only way to be. She also points out the hypocrisy and changing definitions of monogamy (ie, one sexual partner for life). You could have two long term relationships, and consider yourself monogamous in both of them (!?), but as soon as you slept with the second partner, you were not monogamous!
She gives lots of examples of couples who talked things over and thrashed things out under her guidance and with her insight, and in each case the couples eventually came good and made the adjustments needed for a more fulfilling sex life. My only criticism is that she never gives examples of when, having disclosed their innermost thoughts and secrets, the couple realise they are incompatible, not on the same wavelength and split up! Taking a risk and opening up to your partner can have wonderfully positive effects, but it could also be a deal-breaker, and Perel doesn't seem to fully acknowledge this. It could be argued, though, that the risk of not communicating, putting your head in the sand and trying to maintain the status quo has its own unhappy consequences.
Nevertheless, it is an honest, helpful and thought-provoking read for any couple in a long term relationship who have started to wonder where has all the magic gone and why is sex becoming a bit boring and predictable.

Jenjen
5.0 out of 5 stars One of those ‘everyone should read this’ kind of books
Reviewed in the United Kingdom on 23 April 2018
Verified Purchase
Takes her ages to get into the meat, the first chapter or two is just summarising what we all know, love is hard. But eventually she gets into case reviews which are super interesting and although really specific still weirdly universally applicable. I haven’t completely read a book in years and I smashed through this, it’s got highlights, notes and all sorts all over it now. Definitely a read to any one who cares about themselves and anyone else
Read more
28 people found this helpful
Report abuse

Roshan
2.0 out of 5 stars Gossip from her clients, nothing else of note....
Reviewed in the United Kingdom on 24 May 2020
Verified Purchase
This is a very feminine book in the way it deals with subject matter mostly through an emotional appeal through the authors own experience.

I didn't find there to be much reasoning behind it. And in fact because it focuses purely on sex, it made me wonder what some of the advice she gave would have on the relationship (I think in one case she advises the couple to basically only meet for sex!).

And to be honest, I was reading it from the position of the 'red pill' lens anyway having read the inspirational books from Rollo Tomassi and it seems that this book does conform very much to views he puts forward in his books (basically maintaining frame and dominance). Given the author doesn't really demonstrate any rationale or any overall guiding principles I'm not quite sure what this book has to offer besides a lascivious title!
Read more
4 people found this helpful
Report abuse

sapitt
5.0 out of 5 stars Engaging, fascinating book
Reviewed in the United Kingdom on 21 December 2017
Verified Purchase
I heard the author on radio 4 woman's hour and liked the sound of her. The book considers sensuality, sexuality and self in relation to an other and has made me consider cultural norms in relation to being part of a couple in a committed relationship. Hugely interesting book.
Read more
13 people found this helpful
Report abuse

Rose
4.0 out of 5 stars An important and enjoyable perspective on passion
Reviewed in the United Kingdom on 8 January 2019
Verified Purchase
I love the way Esther Perel thinks and talks about sex and relationships - forthright but generous, open-minded, realistic and practical but also often poetic.

This is a thought-provoking book rather than a practical one - there aren't bullet point lists, plans or outright 'rules', but it'll make you consider your own relationships and habits, which is perhaps more meaningful in the long term. I listen to her podcast, Where Should We Begin?, so some of the content was a little familiar to me, but I enjoyed reading throughout.
Read more
6 people found this helpful
Report abuse
See all reviews
Back to top
Get to Know Us
Make Money with Us
Let Us Help You
And don't forget:
© 1996-2021, Amazon.com, Inc. or its affiliates