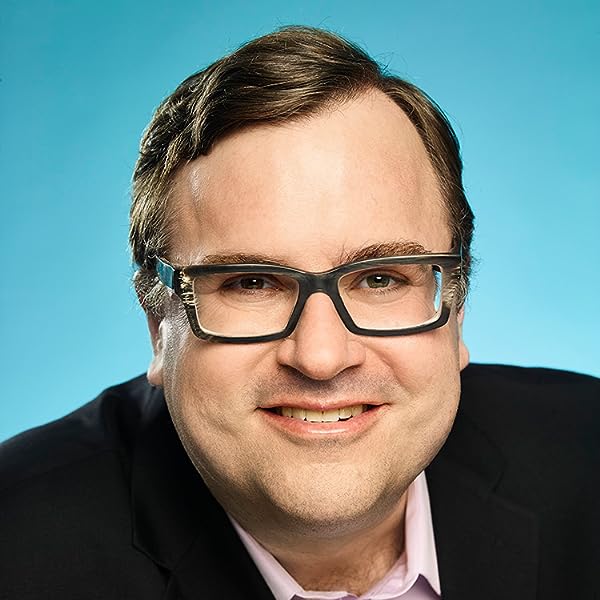 Masters of Scale: Surprising truths from the world's most successful entrepreneurs Hardcover – 19 October 2021

by Reid Hoffman (Author)
5.0 out of 5 stars 8 ratings
See all formats and editions
Sorry, there was a problem loading this page. Try again.

Masters Of Scale is about more than scaling. At its core, it's a book about how wildly successful people have noticed what others haven't, what they did with those ideas and what they learned along the way despite various setbacks. It's also about how curiosity, perseverance, humility and risk have helped turn seemingly impossible ideas into lucrative businesses. ― Forbes

A book to take with you into battle as you build a company or a career. It's full of enjoyable stories, but the killer feature is the sharp insights Reid draws out - specific, memorable, actionable mindsets. -- Reed Hastings, co-founder and CEO, Netflix

Whether you're at a startup or working to drive change within a large organization, the business principles in this book will help you deploy your strategy with creativity, integrity and realism. -- Satya Nadella, CEO, Microsoft

Reid Hoffman has a talent for getting right to the heart of a business case and turning it into an unforgettable lesson. If you're scaling a company - or if you just love a well-told story - this is a book to savour. -- Bob Iger, executive chair, Walt Disney Co.

To lead with vision and heart, start by listening and learning from others. Using stories to teach lessons, this book is full of solid (and sometimes surprising!) advice that will help accelerate your journey. -- Angela Ahrendts, former CEO, Burberry, and former head of Apple Retail

Reid Hoffman is the co-founder of LinkedIn, a partner at Greylock, and widely viewed as one of the most successful investors of all time. A founding board member of PayPal, he is now a board member at Microsoft as well as other companies and nonprofits. He's the host of WaitWhat's award-winning podcast Masters of Scale podcast and the bestselling author of The Startup of You, The Alliance, and Blitzscaling.

June Cohen and Deron Triff are the executive producers of the podcast Masters of Scale and co-founders of WaitWhat, the media company behind the hit podcasts Masters of Scale, Meditative Story, and Spark & Fire. Previously, they led TED's media enterprise, growing TED Talks from its initial concept to an audience of 1 billion.
Start reading Masters of Scale on your Kindle in under a minute.

An accomplished entrepreneur, executive, and investor, Reid Hoffman has played an integral role in building many of today’s leading consumer technology businesses, including LinkedIn and PayPal. He possesses a unique understanding of consumer behavior and the dynamics of viral businesses, as well as deep experience in driving companies from the earliest stages through periods of explosive, “blitzscale” growth. Ranging from LinkedIn to PayPal, from Airbnb to Convoy to Facebook, Reid invests in businesses with network effects and collaborates on building their product ecosystems.

Reid co-founded LinkedIn, the world’s largest professional networking service, in 2003. LinkedIn is thriving with more than 500 million members around the world and a diversified revenue model that includes subscriptions, advertising, and software licensing. He led LinkedIn through its first four years and to profitability as Chief Executive Officer. In 2016 LinkedIn was acquired by Microsoft, and Reid became a board member of Microsoft.

Prior to LinkedIn, Reid served as executive vice president at PayPal, where he was also a founding board member.

Reid joined Greylock Partners in 2009. He focuses on building products that can reach hundreds of millions of participants and businesses that have network effects. He currently serves on the boards of Airbnb, Coda, Convoy, Edmodo, Entrepreneur First, Gixo, Microsoft, Nauto, Xapo, and a few early-stage companies still in stealth. In addition, he serves on a number of not-for-profit boards, including Kiva, Endeavor, CZI Biohub, and Do Something. Prior to joining Greylock, he angel invested in many influential Internet companies, including Facebook, Flickr, Last.fm, and Zynga.

Reid is the co-author of two New York Times best-selling books: The Start-up of You and The Alliance. His next book is focused on “blitzscaling”, based on his Stanford course of the same name. Reid is the host of Masters of Scale, an original podcast series and the first American media program to commit to a 50-50 gender balance for featured guests.

Reid earned a master’s degree in philosophy from Oxford University, where he was a Marshall Scholar, and a bachelor’s degree with distinction in symbolic systems from Stanford University. In 2010 he was the recipient of an SD Forum Visionary Award and named a Henry Crown Fellow by The Aspen Institute. In 2012, he was honored by the Martin Luther King Center's Salute to Greatness Award. Also in 2012, he received the David Packard Medal of Achievement from TechAmerica and an honorary doctor of law from Babson University. In 2017, Reid was appointed as a CBE by her majesty Queen Elizabeth II.

Devout Materialist
5.0 out of 5 stars Surprisingly useful on personal level
Reviewed in the United States on 14 September 2021
Verified Purchase
Fan of the podcast, so decided to get the book. What I like about the podcast is its documentary narrative aspect. It gives you a behind the scenes insider look at how iconic companies like Netflix, Spotify, Etsy, Airbnb, etc. dealt with surprise challenges, bad luck, unexpected competition, before they were iconic and possibly not going to survive.

So I was expecting the book would have more of the same. It mostly does, and just like the podcasts, it's done in a very entertaining style. The difference is that the book is more of a user manual for your own life, than narratives about legendary tech start-ups. And I mean that in the best possible way.

Lots of great ideas and principles you COULD apply to the amazing start-up idea that you hope to turn into a unicorn. But more likely, you'll apply to your own life.
Read more
3 people found this helpful
Report abuse

Shankar Saikia
5.0 out of 5 stars Excellent - another great one from R Hoffman
Reviewed in the United States on 21 September 2021
Verified Purchase
Wow! Where do I start ? This is another awesome book, as good as “Startup if You”. One of my favorite lessons from that book was that (I’m paraphrasing here) … if you have some knowledge or capability that is in short supply then you will be of value to others in need of that knowledge/capability.
The nuggets that I got from this book are
1. “No” is a good response during fundraising
2. Do things that do not scale
3. Watch what they do, not what they say
The book is extremely well written, easy to read, and easy to extract the key points. I highly recommend it to any aspiring entrepreneur. I could write a lot more but I don’t have the time …. I gotta produce my first prototype… since I have a “bias toward action” ! :) (another great nugget from the book)
Read more
Report abuse

Randy
5.0 out of 5 stars Considering business school? Try this first.
Reviewed in the United States on 11 September 2021
Verified Purchase
I recently bought this for my son, who is at a point in his life where he’s got some ideas for building his own startup and isn’t sure if he should just dive in or consider business school. This book is THE BEST introduction to this world if you are considering building your own company or possibly seeking an MBA (or, wondering if you even need one…spoiler: you may not after you read this). This in combination with the Masters of Scale app (which I didn’t know existed before) is the perfect way to dip your toe in the startup waters and explore if working for yourself is for you.
Read more
Report abuse

Anna
5.0 out of 5 stars Beautifully written
Reviewed in the United States on 9 September 2021
Verified Purchase
This book is such a treasure. I'm finding it full of insights — particularly around the mindset of an entrepreneur. Easy to dip in and out of. Lots of interesting stories. Beautiful cover.
Read more

5.0 out of 5 stars Beautifully written
Reviewed in the United States on 9 September 2021
This book is such a treasure. I'm finding it full of insights — particularly around the mindset of an entrepreneur. Easy to dip in and out of. Lots of interesting stories. Beautiful cover.
Images in this review

Luke
5.0 out of 5 stars The funnest business book I've read
Reviewed in the United States on 11 September 2021
Verified Purchase
Lots of stories and super useful business insights all written in a light, friendly voice. This book makes business learning fun. Great for scale rookies and pros alike. Well curated, beautifully designed. Five stars!
Read more
Report abuse
See all reviews
Back to top
Get to Know Us
Make Money with Us
Let Us Help You
And don't forget:
© 1996-2021, Amazon.com, Inc. or its affiliates