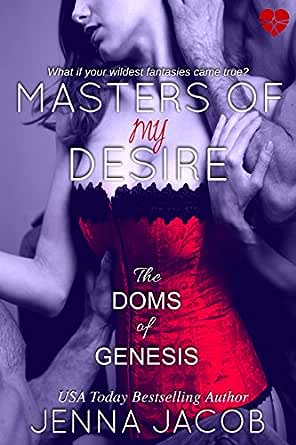 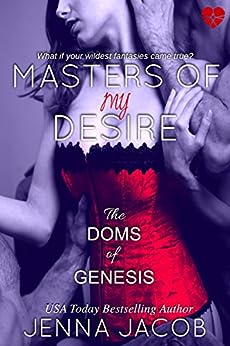 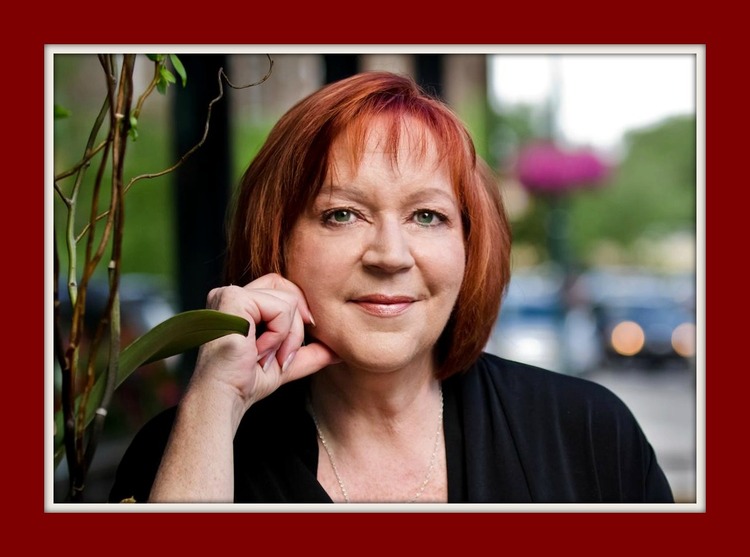 Masters Of My Desire (The Doms Of Genesis, Book 2) Kindle Edition

Nicca
TOP 1000 REVIEWER
5.0 out of 5 stars Excellent read!
Reviewed in Australia on 31 August 2016
Verified Purchase
Another wonderful book from Jenna Jacobs in the Doms of Genesis Series. The connection between Savannah, Dylan & Nick was so strong right from the beginning and it amused me the way they encouraged Savannah to embrace her submissive side. Who wouldn't want their secret desires fulfilled by not only one but two gorgeous dominants?! Stern and demanding, yet so loving and caring, Nick & Dylan help Sanna to conquer her fears and insecurities and embrace who she really is. Truly enjoyed their journey!
Read more
Helpful
Comment Report abuse

Amazon Customer
TOP 1000 REVIEWER
5.0 out of 5 stars Masters Of My Desire (The Doms Of Genesis Book 2)
Reviewed in Australia on 5 March 2017
Verified Purchase
I really loved reading this book and it is just as good as the first book in this series, and i am looking forward to reading the third book in this series. I found it to be raw, sexy, intense, kinky, passionate, sensual, warm, compassionate, serious, great storyline, dark, faboulas and amazing as well.
Read more
Helpful
Comment Report abuse

sharon fletcher
5.0 out of 5 stars master of my desire
Reviewed in Australia on 17 June 2015
Verified Purchase
I highly recommended book it will play a movie in your mind as you read . Thank you Jenna Jacob
Read more
Helpful
Comment Report abuse
See all reviews from Australia

K. Punjwani
3.0 out of 5 stars Menage and more
Reviewed in the United Kingdom on 28 July 2013
Verified Purchase
pretty funny beginning, a rescue by 2 hot men after the damsel hits a deer. Nice bit of thought about the realities of a menage relationship and how it is viewed by outsiders. not sure in reality it would be so simple. still nice bit of having your cake and eating it.
Read more
Helpful
Sending feedback...
Thank you for your feedback.
Sorry, we failed to record your vote. Please try again
Report abuse

carly wright
5.0 out of 5 stars Amazing!!
Reviewed in the United Kingdom on 22 February 2018
Verified Purchase
Loved this book! Filled with dirty, link and love, it opened up desires. A great read. Thanks for the book.
Read more
Helpful
Sending feedback...
Thank you for your feedback.
Sorry, we failed to record your vote. Please try again
Report abuse

Savvy_Shopper47
5.0 out of 5 stars Absolutely Brilliant
Reviewed in the United Kingdom on 27 October 2014
Verified Purchase
Nick, Dylan and Savannah will capture you're heart, imagination and serve you a huge portion of love & lust.

Amazon Customer
5.0 out of 5 stars Five Stars
Reviewed in Canada on 20 January 2017
Verified Purchase
Loved it, I didn't want to put it down.
Read more
Helpful
Sending feedback...
Thank you for your feedback.
Sorry, we failed to record your vote. Please try again
Report abuse

twistedtnredhead
1.0 out of 5 stars Spoilers for the 1st 20 pages of the book. I couldn't bring myself to read any further.
Reviewed in the United States on 28 December 2016
Verified Purchase
The beginning made me ill. I can't even read the rest.

Savannah was spineless. Dylan and Nick didn't listen. They took off her clothes while she was unconscious, and didn't bother to put anything back on her, and yeah, she got angry, but then she immediately thought 'Oh, they're Doms. They believe in SSC. They wouldn't have hurt me while I was not aware. How does she know that? She knows nothing about them other than her 'loins' were very interested in them.

Nick wouldn't leave for her safety, when she needed to go to the bathroom, which I understand, but why did he make her get up w/out a robe? He could have found it for her. They had obviously been through her things. They found her grocery list. And he did eventually give it to her after she was finished in the bathroom. He completely embarrassed her for no reason other than he was being an ass!

No Dom I know is going to act like that. Especially when he doesn't know them.

And that was just the first 20 freaking pages!

I have read this book in its entirety before. I cannot bring myself to do so now. The way they just bowled her over was, to me, just wrong. It felt like they never listened to her at all. It was all, 'oh, she is the poor little subbie, and we are the big bad Doms. We know what you want and need. We don't need to ask you.' Blah blah blah.

Sorry for venting, but this is one of my triggers.
Read more
8 people found this helpful
Helpful
Sending feedback...
Thank you for your feedback.
Sorry, we failed to record your vote. Please try again
Report abuse
Load more international reviews

Tiffany S
5.0 out of 5 stars Sweet Submission
Reviewed in the United States on 16 December 2016
Verified Purchase
Another book I read over 2 yrs ago but had not taken the time to properly review. The second installment of The Doms of Genesis series Masters of My Desire is probably one of my favorite books in the collection. Sweet Savannah meets Master Nick and Master Dylan by happenstance on a deserted road after an accident with a huge buck. Immediately they recognize the submissive in her and decide to take her under their wing. Soon though all parties involved find themselves not only losing their inhibitions with each other but their hearts as well. When Savannah runs away to protect her breaking heart they must all decide if the relationship they've built is worth fighting for. This book was a great addition to the series. Watching Savannah blossom under the hands of Nick and Dylan was lovely. Again this book was such a wonderful peek into the BDSM life style. It really showed the foundation of what these kinds of relationships are built on. The trust, communication, honesty and love that makes Nick, Dylan and Savannah work was wonderful to watch grow. Another 5 Stars.
Read more
2 people found this helpful
Helpful
Sending feedback...
Thank you for your feedback.
Sorry, we failed to record your vote. Please try again
Report abuse

Morgan Stokes
5.0 out of 5 stars A book so good I reread it!
Reviewed in the United States on 27 November 2018
Verified Purchase
Reread review:
I loved this just as much, if not more, the second time around!!! I don't know why this is my favorite of the ones I've read in the series, but it is. Savannah and Dylan and Nick are just perfect together!

Original review:
So far I love this series. The characters are so real, and their emotions are potently projected off the page. I wish we could have learned more about Nick and Dylan's pasts, but the little taste serves to move the plot along.

Towards the end, there is almost a full chapter that coincides with events in the first book, Embracing My Submission, making that part of the book a bit redundant. But it ends on a high note, bringing the story back to focus on its main characters.

I really like how the author expresses the fears and emotions of Savannah and other subs in this series, making their journeys relatable.
Read more
Helpful
Sending feedback...
Thank you for your feedback.
Sorry, we failed to record your vote. Please try again
Report abuse

Mel M
5.0 out of 5 stars Her Fantasy Men
Reviewed in the United States on 21 April 2019
Verified Purchase
Talk about your "deer in the headlights" look. That's what Savannah gets when two gorgeous hunks stop to help her after she hits deer. Little does she know but these two men are the stuff that her fantasies are made of. Nick and Dylan are immediately drawn to Savannah and recognize her submissive side almost immediately. The three spend a life changing week exploring a menage relationship. However, Savannah is plagued by self doubts and insecurities. The two men make some headway but in the end she runs. Now it's up to N8ck and Dylan to prove to Svannah they're all in.
Read more
Helpful
Sending feedback...
Thank you for your feedback.
Sorry, we failed to record your vote. Please try again
Report abuse

lindarb
4.0 out of 5 stars Great Story, Mediocre Editing
Reviewed in the United States on 4 January 2018
Verified Purchase
I did enjoy this BDSM romance, but would have enjoyed it more if the editing had been better. I often had to re-read sentences to figure out what was intended. That said, I really liked the characters, especially Nick and Dylan. Susanna had a real case of low self esteem which caused much of the drama in this story. Being a menage, the sex scenes were steamy, but perhaps a little too numerous.
It was fun to see what was going on in the lives of Mika and Juliana from the first book.
Story: 4.5
Writing: 4.5
Editing: 3
Characters: 5
Heat index: 4.5
Read more
One person found this helpful
Helpful
Sending feedback...
Thank you for your feedback.
Sorry, we failed to record your vote. Please try again
Report abuse

Pansy Petal
3.0 out of 5 stars Disappointing
Reviewed in the United States on 31 March 2017
Verified Purchase
To date I have enjoyed everything I have read by this author. This one however was disappointing. There was no real story. Just unending sex. I know, what a thing to complain about. But combine that with how poorly edited and/or proofed this was and well, it's lucky I even finished this story. I mean the plot contradiction between the first and second chapters and the myriad typoes, missing or added words, and the just plain bad grammar kept pulling me out of the story. So even if I was enjoying all the sex, triggers were tripped and limits hit. Disappointing.
Read more
2 people found this helpful
Helpful
Sending feedback...
Thank you for your feedback.
Sorry, we failed to record your vote. Please try again
Report abuse