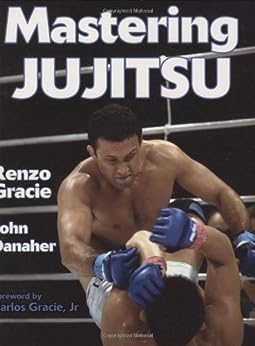 One of the most successful and active members of the world-famous Gracie clan, Renzo Gracie has spent almost 30 years training in Brazilian jujitsu. Competing at the highest levels of mixed martial arts (MMA), grappling, and no-holds-barred (NHB) events, he has won the Brazilian jujitsu national title twice, the World Combat Championships (MMA event), and the martial arts reality series superfight. He is also a two-time winner of the world submission grappling championship (held annually in Abu Dhabi) and a multiple winner in Japan's premier MMA venue, PRIDE.

Gracie has instructed many current UFC competitors and students who have gone on to become world Brazilian jujitsu champions, PRIDE champions, and Pan American Games champions. His New York City academy is one of the largest and most popular in the United States. Gracie continues to teach, train, and compete throughout the world. He resides in New York City.

An instructor at the Gracie school of Jujitsu in New York, John Danaher has been Renzo's training partner for several years. He holds a PhD from Columbia University and has written another book, Brazilian Jujitsu: Theory and Technique, with Renzo and his cousin Royler Gracie. Danaher has the distinction of being involved with the highest authorities in the sport and the formal writing skills to convey it. He resides in New York City.

Kindle Customer
5.0 out of 5 stars Fast shipping
Reviewed in Australia on 6 January 2021
Verified Purchase
My husband who does BJJ really enjoys the book. And the shipping was fast! Thanks!
Read more
Helpful
Report abuse
See all reviews

giardia
5.0 out of 5 stars Great fundamentals
Reviewed in the United Kingdom on 9 June 2018
Verified Purchase
This product contains a vast wealth of knowledge regarding BJJs history, its practical use in fighting and self defense and has large sections devoted to both.

It is very much so more focused on old school classic Brazilian Jiu Jitsu such as in clinching a striking opponent and how to mitigate the impact of strikes or use them while restraining someone.

It is not that relevant to modern sports BJJ and does not contain any new or revolationary moves in that regard but I do not personally consider this a bad thing as the older school of BJJ is often overlooked or forgotten about in most clubs now.

I would definitely reccomend this book if you started Jiu Jitsu for self defense or if you are interested in MMA as this is what the book revolves around. It comes from Renzo's perspective and he is one of the best Gracie's to ask about this subject as he was a very active fighter in his day.

If you are looking for an understanding of modern techniques such as inversions and berimbolo then you would be better off with another recent competitors DVD.

Over all this is a great product for the basics of Brazilian Jiu Jitsu and it is those basics that we should spend most of our time concentrating on.

Mr. ODR Moore
4.0 out of 5 stars Paper format - 5* - Kindle format - 2*
Reviewed in the United Kingdom on 26 April 2019
Verified Purchase
I have been given a paper copy of this text (Kindle version is unreadable) and NOW appreciate the introduction (I didn't get past it on the Kindle!). It sets the scene for WHY Gracie Jiu Jitsu (GJJ) has become so prolific.
In a world of points, competitions and elaborate techniques, GJJ still insists on being effective against personal assault - street readiness in a hostile world is crucial (especially in NYC - see Gracie Breakdown for NYPD pummelling their suspects !).
Forget the 70's BS films and believing striking will deliver a knockout blow. Most fights end up on the ground. Your transitions from standing to clinching to grappling will be enhanced by this book. Key concepts and actual techniques are illustrated.
The final key in the puzzle is simple; commit to attending your local GJJ school to support them during the pandemic (even on Zoom!). Stop waiting until your are lighter, fitter, stronger, more motivated etc. These excuses are stopping you feeling more confident in an increasingly aggressive world. GJJ is evidence-based self defence. You buy car & house insurance right? So invest in some personal safety insurance - buy this book and show up to a class ASAP. Today will be yesterday tomorrow!
Read more
Report abuse

Nigel Warburton
2.0 out of 5 stars I feel robbed after buying on faith in the authors and its positive reviews
Reviewed in the United Kingdom on 7 March 2020
Verified Purchase
I learnt more from the free Wikipedia page on BJJ than I did in this book. It's barely even a book beyond being bound; it's more like blog posts compiled. And the breakdown of techniques given the authors is dire - it starts with basics and then says nothing about how to use and respond etc. Disappointing.
Read more
2 people found this helpful
Report abuse

Codger
4.0 out of 5 stars OK book but not for competitive BJJ
Reviewed in the United Kingdom on 6 September 2012
Verified Purchase
Funny book this. 1/3 of it's history of BJJ which was very interesting. The rest of it's no-gi and quite focussed on MMA/self-defence. As that I think it's very good indeed. Won't you don't get is detailed instruction on the full gamut of BJJ techniques. It's not always the easiest to follow from the pics and descriptions. If you're looking for a BJJ instructional that isn't MMA/no-gi focussed then get BJJ University instead - it's very good. But if you are up for those aspects then it's a god buy,.
Read more
4 people found this helpful
Report abuse
See all reviews
Back to top
Get to Know Us
Make Money with Us
Let Us Help You
And don't forget:
© 1996-2021, Amazon.com, Inc. or its affiliates