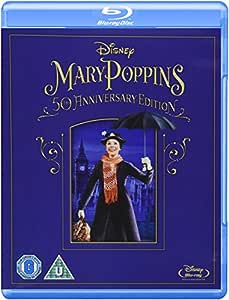 Format: Blu-ray
4.8 out of 5 stars 5,661 ratings
International product from outside Australia

All Regions UK blu-ray release, playable on all worldwide blu-ray players. Please note that Disney Rewards are not available in the US (only in the UK).

A pioneering film with Animation, Mary Poppins is possibly one of the most heart warming films ever made. Based on a story by PL Travers, we find Julie Andrews in peak form in her debut lead role (for which she would win the "Best Actress" Oscar. Andrews is perfectly paired with Dick Van Dyke as the lovable chimney sweep Burt, whose Cockney accent is endearingly inaccurate. Along with a stellar supporting cast, where even the child actors shine, Poppins takes you on a magical ride through chalk pictures, the rooftops of London and show you that laughter is not always the best medicine (even with a spoonful of sugar). Mary Poppins clocked up five Academy Awards including Best Song and Best Visual Effects and made it a staple of family entertainment across the globe.

J.Park
5.0 out of 5 stars One of the best movies of all time!!
8 December 2017 - Published on Amazon.com
Verified Purchase
Our family loves this old jewel. I would focus on the digital part of this blu-ray purchase since the description does not state clearly. This blu-ray comes with blu-ray (of course), dvd, and the digital movie code. This code can be redeemed on Disney's movies anywhere then it would immediately show up on iTunes or Vudu or whatever service you linked with Disney movies anywhere service. As of today the digital movie code included in the package works fine.
Read more

Unlit
5.0 out of 5 stars A timeless joy
15 April 2017 - Published on Amazon.com
Verified Purchase
I haven't watched this movie since I was a child and it was a joy to see it again and have the memories of the songs and dancing come back. The movie is updated only in the sense that the color is more vivid and the people. Definitely an upgrade from watching it on VHS. There were no parts added or taken out making it the same great movie made years ago. I couldn't be happier with purchasing this movie to watch again later down to line and sing along to. Being an adult now it was interesting to watch this and see the life lessons that it teaches that as a child you do not pick up on or register.
Read more
96 people found this helpful

Lynn C. Craven
5.0 out of 5 stars More movies like this one would be wonderful
27 December 2017 - Published on Amazon.com
Verified Purchase
It is too bad they do not make movies like this anymore. A feel good movie.......Julie Andrews was beautiful. The movies now a days are too violent, foul, or just plan crap!!
Read more
32 people found this helpful