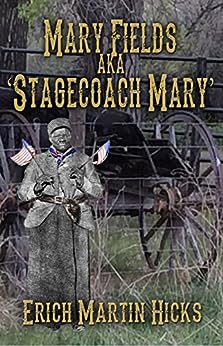 by Erich Hicks (Author) Format: Kindle Edition
See all formats and editions
Sorry, there was a problem loading this page. Try again.
This is the story of Mary Fields, 'Stagecoach Mary', who got her nickname at the turn of the 20th Century. She earned this nickname by working for the United States Postal System delivering the United States Mail through adverse conditions that would have discouraged the most hardened frontiersmen of that period. All by herself, she never missed a day for 8 years, carrying the U. S. Mail and other important documents that helped settle the wild open territory of central west Montana. Mary had no fear of man, nor beast, and this sometimes got her into trouble. She delivered the mail regardless of the heat of the day, cold of night, wind, rain, sleet, snow, blizzards, Indians and Outlaws.

Mary was 6 feet tall, and weighed over 200 pounds, and even with 'those' extraordinary extremes, there were two more facts that made 'her' history. Mary was the second woman in 'history' to carry the U. S. Mail, however, even that was a matter of simplicity, for a fact, she was a Negro Woman, and the only 'Negro', for hundreds and hundreds of miles when she first arrived in Montana.

This feature story covers Mary's colorful life, from the plantation where she was born a slave in 1832, to the famous Steamboat race between the "Robert E. Lee" and the "Natchez" on the Mississippi River, to her death in Cascade, Montana, 1914.

Stagecoach Mary was a cigar smoking, shotgun and pistol toting Negro Woman, who even frequented saloons drinking whiskey with the men, a privilege only given to 'her', as a woman. However, not even this fact, sealed the credentials given to her, her credentials boasted that, 'she could knock out any man with one punch', who stepped upon her womanhood, a claim she proved true.

Erich Hicks, founder of Alpha Wolf Productions Inc., is an acclaimed Special Effects Coordinator, Producer and Writer, with over 20 years of experience in the entertainment industry. The company is an independent production outlet that develops, writes, and produces feature film and television content. Historically, Erich is the first African-American/Black to receive a Special Effects Pyrotechnic Operator's 1st class Master's License in the Motion Picture Industry. Thus, he is expertly qualified to produce and direct action sequences, stunts and explosions to achieve a realistic scene.

As a writer, Erich's first novel, Rescue at Pine Ridge, released in December 2008. The novel is a historical narrative, depicting the all-Black 9th Calvary. Known as the US military's famed 'Buffalo Soldiers', which helped settle the American West in the late 1800's. Erich has completed an accompanying screenplay for a TV mini-series, Trilogy, and Epic Feature, and has garnered support from some of HOLLYWOOD'S acclaimed Industry Producers/Directors/and Actors. Dedicated to exploring the history of African-Americans/Blacks and shattering stereotypes, his Alpha Wolf Productions, Inc. has also developed a feature film documentary, Soul on a Wave which exposes the life and times of surfers of color.

Please visit the webpage for more information at: alphawolfprods.com and for a comprehensive resume at imdb.com/name/nm0902436

4.1 out of 5 stars
4.1 out of 5
27 global ratings
How are ratings calculated?
To calculate the overall star rating and percentage breakdown by star, we don’t use a simple average. Instead, our system considers things like how recent a review is and if the reviewer bought the item on Amazon. It also analyses reviews to verify trustworthiness.

Silver-Rain-Horse
3.0 out of 5 stars Beware! You are 'reading a film'....not a book
Reviewed in the United Kingdom on 10 April 2017
Verified Purchase
I 'wanted' this book to be a really fantastic read, but I found myself perplexed by the fact it is written in the present tense & at times seemed almost like reading a story in a list of bullet points. The way it was written lacked depth, emotion and character. However, I only realised when I got to the end of the book that it is a book written for the purpose of making a film. This explains why it simply wasn't a good book to read for either factual or fictional enjoyment. So, in a sense, you're actually reading a film, as opposed to reading a book. I really wish I'd known this before I purchased it as it wasn't a good read because of the way in which it is written.
I wanted to read a factual book about Mary Fields, though this said, I was accepting that the story was 'coloured in' in places for entertainment purposes. If I had only realised the way in which this book was written, I would have selected a different book on Mary Fields as it simply wasn't the nicest read if I'm honest.
If the author was to re-write this book for the purpose of a 'reading book' as opposed to a film then I think it would be a very good book.

Joy V. Smith
4.0 out of 5 stars Mary Fields: A legend in her own time and for all time.
Reviewed in the United States on 25 November 2016
Verified Purchase
I've known about Stagecoach Mary for a long time (She's on my Western Style board on Pinterest), so I was happy to find this book. (It's written in the present tense, btw.) Not much is known about her early life so the author has fictionalized that, but I believe he's caught the flavor of the time: plantation life, the slaves' lives, the Civil War, and the aftermath when the slaves were freed. He enhanced her later career, however, which wasn't necessary because she was a fantastic woman--and a legend in her own time.

The book has a number of photos and illustrations from her life and times. Despite her being a black woman, the town (Cascade, Montana), where she later lived--and others elsewhere--respected her, and there are clippings from the newspapers when she died and the town turned out for her funeral. Of course, she did run into a lot of prejudice; the N word was especially popular back then..., but she stood her ground: "Do ya wanta' meet your 'maker' now...or later when he's a callin' for ya?"

Highly recommended because of the history and because this woman should never be forgotten.

Note: The author has done a lot of research--read more at the end of the book--but it could have used more editing. There were a number of misspellings--one word was spelled two different ways--and commas were scattered like snowflakes.
Read more
One person found this helpful
Report abuse

Amazon Customer
5.0 out of 5 stars Historical Fiction At Its Best
Reviewed in the United States on 10 September 2016
Verified Purchase
Finally, a well researched historical novel about Mary Fields that sets the record straight!
This book is perfect material for a film that highlights the contributions, excitement and history of African American women and their place in the pantheon of stories about "The Wild West." Filled with the flavor of how people spoke during that time period and their reactions to being in the presence of a lone Black woman in a part of America (Montana) we don't often hear much about was a joy to read. The historic photos and documents are priceless!
Eric Hicks clearly shows in his book that this project was a labor of love. In 2015, Mary Fields was inducted into the National Cowboy Hall of Fame.
I'd like to think the years of hard research conducted by Eric is partly responsible for her rightful place in the history of the Western frontier.
This book is Historical fiction at its best! Now somebody option this book and make that movie!!!
Read more
Report abuse

Jeri Lopez
5.0 out of 5 stars amazing woman who was the first Black woman to work ...
Reviewed in the United States on 21 April 2016
Verified Purchase
A story of a real, amazing woman who was the first Black woman to work for the U.S. Postal Service following the Civil War. The author takes us back to Mary's childhood as a slave, and builds the story of how she overcame violent reactions to her color and size, and how so many came to love and respect her. It is a fascinating read. Real, honest and entertaining. As you read you will find yourself tied up in the intricacies of her life and true honesty, caring, and strength. I read it when it was first published, and I still find myself thinking about her and re-reading portions of the book I find most riveting. I loved it and...so will you.
Read more
3 people found this helpful
Report abuse
See all reviews
Back to top
Get to Know Us
Make Money with Us
Let Us Help You
And don't forget:
© 1996-2021, Amazon.com, Inc. or its affiliates