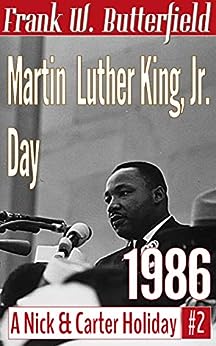 Ulysses Grant Dietz
5.0 out of 5 stars Poignant, sweet, evocative
Reviewed in the United States on 27 January 2020
Verified Purchase
A sweetly written and poignant short story, the second in Butterfield’s series celebrating holidays with Nick and Carter at different times of their lives. Nick and Carter are in their mid-sixties (i.e. my age), and are preparing to be part of the first ever Martin Luther King Jr. parade in San Francisco. The year is 1986, and thus the shadow of AIDS that would devastate San Francisco’s gay community is already darkening the City by the Bay. But the focus is celebratory, because this is not about the gay folks, this is about black folks.

We are reminded in this story about Nick and Carter’s preternatural lack of racial prejudice, something they certainly taught each other, since neither of them learned that at home. We are also reminded of several people in their lives who have died, provoking more memories and that nostalgia we feel when we remember those we have loved.

It is a simple, big-hearted, and carefully crafted story, calculated to take us back to a time that was complicated and filled with a mixture of triumph and tragedy. My Gary and I had been together eleven years in 1986, and our friends had begun to die, too. I read this story on Martin Luther King, Jr.’s birthday – which happens to be my mother’s birthday. It gave me a good moment to reflect on life, and the world, and its ever-changing surprises.
Read more
One person found this helpful
Report abuse

silvia
5.0 out of 5 stars An important day!
Reviewed in the United States on 3 September 2020
Verified Purchase
I loved this short story. It brought tears to my eyes. I’m old enough to remember what life was like in the 60s when it was difficult to find a house to rent in the southwest Portland suburbs that didn’t have a clause in the lease that it could only be rented to Caucasians. My dad was turned away but it didn’t break him and he ended up making a better life for us in the southeast farmlands instead. I will always be indebted to Reverend King. My hero.
Read more
Report abuse
See all reviews
Back to top
Get to Know Us
Make Money with Us
Let Us Help You
And don't forget:
© 1996-2021, Amazon.com, Inc. or its affiliates