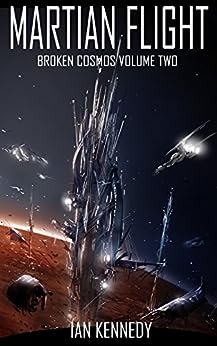 Ying Xiao
4.0 out of 5 stars Fun read, but not as moving as the 1st or 3rd volume
Reviewed in the United States on 15 April 2018
Verified Purchase
This second volume in the Broken Cosmos trilogy deals with Mars -- a border buffer zone between the two warring corporations that's mostly a hive of scum and villainy. The writing is fast paced, and takes a number of unexpected turns swerving between violence, addiction, Shakespeare (!) and surrealism (stock market gods, anyone?). It's a fun read -- highly recommended, but I do think the book lacks the emotional weight of the first and third books.

Apart from the space opera unfolding as the main plot line, the central character development is a study of addiction. Both Draz and Alfred have their addictions, and there's uncomfortable dialogue as they both talk around it. I think Kennedy draws an unusually sympathetic portrait of the struggle with addiction -- the cycles of frustration, yearning, and shame -- and these quieter lulls are some of my favorite parts in his books.

More dramatically (slight spoiler alert), one of the characters finds themselves drawn to violence in an unsettling way. Actually, there are some really violent scenes in this book -- this series definitely draws on some grimdark sci-fi elements. Speaking of which, I hadn't noticed this as much in the first book -- but Kennedy explores the consequences of low tech (no faster than light travel) sci-fi, and it makes for a tense slowly boiling story at times.
Read more
Report abuse
See all reviews
Back to top
Get to Know Us
Make Money with Us
Let Us Help You
And don't forget:
© 1996-2021, Amazon.com, Inc. or its affiliates