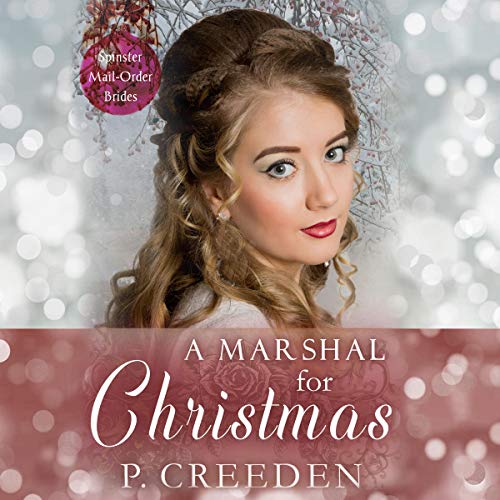 A lonely and abused woman without a home. A marshal who is given the sudden responsibility of two children. A mail-order bride situation that has fallen to ruin. Can Lottie find a home and a family by Christmas?

When Lottie Reiner lost her father in the war, her mother fell to pieces. At the young age of 11, Lottie began caring for her catatonic mother. But when both her mother and grandfather pass away months apart, Lottie becomes nothing but a burden to her family. Her grandmother pushes Lottie to get married before it’s too late. But Lottie is a 27-year-old spinster with no experience raising children. Isn’t it already too late?

Deputy US Marshal Archer King comes from a family of lawkeepers. His father was a US Marshal, and his mother worked as a Pinkerton agent with Kate Warne. When his only sister passed on in childbirth, his brother-in-law swore he could care for the children on his own. And Archer was to check in on them, but in almost two years, he’s neglected that duty to his sister. When the father, Sam Hodge, goes missing, he finds out exactly what kind of dire situation the children have been subject to.

After being turned out of her home, Lottie heads to Durant, Oklahoma, where Sam Hodge and his two children live, in the hopes of becoming a new wife and mother. Only the mail-order situation does not turn out the way Lottie had hoped, and many of the things that Sam had told her in his letters turn out to be lies. The only thing true is the children, and Lottie is fast becoming attached to them. But what will happen when Sam is found? Will she have the opportunity to get a home and a family before Christmas?

4.3 out of 5 stars
4.3 out of 5
26 global ratings
How are ratings calculated?
To calculate the overall star rating and percentage breakdown by star, we don’t use a simple average. Instead, our system considers things like how recent a review is and if the reviewer bought the item on Amazon. It also analyses reviews to verify trustworthiness.

Cindy in GA
5.0 out of 5 stars Sweet Christmas read
Reviewed in the United States on 17 February 2020
Verified Purchase
Her grandfatner had died, her grandmother was moving in with another relative, and her home was sold. Was it coincidence that her grandmother has written on her behalf to a man in Oklahoma who has placed an ad for a mailorder bride to care for his children? Lottie didn't know, but here she was, arriving in the small town of Durant with almost no money and nothing but a man' s name to find her new life. When she arrived, her fjrst discovery was that her fiance was missing and his children were in the care of the sheriff and his wife.
Archer King was a U.S.Marshall who was returning to his home in Durant after a long session on the road. He ran into his brother-in-law Sam as he rode tnrough town. Sam was drunk, as were his two companions. Ar her was stunned to find that his 7 year old nephew was caring for his baby sister with no help from anyone. Archer took the children, along with their grimy dog, to his house until he could figure out how to deal with the situation. The children were clearly neglected, as well as appearing to be abandoned by their drunken father. Arher's first job was to get the children clean and fed before going off to find their father. His sister, who'd died in childbirth, would have expected no less from him. Before he can do that, he must find their father, who had disappeared the night before.

Ms Creeden has written a story to capture anyone's interest. The compassion of the sheriff and his wife in taking in the lady who was to have married Sam and thus raised his children was nothing short of a miracle. The children were immediately drawn to her. But where was Sam, her intended? And whywas the marshall so interested in tbe kids? What would Lottie do to support herself?

I got tnis book in a giveaway. I enjoyed reading it, and am offering my review as encouragement to both the author and other readers.
Read more
One person found this helpful
Report abuse

GretelW
5.0 out of 5 stars GREAT CHRISTMAS MAIL ORDER BRIDE ROMANCE
Reviewed in the United States on 17 February 2020
Verified Purchase
Lottie is a spinster who is forced by her family to become a mail order bride. She arrives to find that her groom is missing and his two children are being cared for by an Uncle. She finds out that most of what her missing groom told her is not true but she doesn't want to go back as her family doesn't want her so she stays. This is a great read with a HEA. Thanks P. Creeden for a great story. Looking forward to reading the next in the series.
Read more
Report abuse

Cindy Nipper
3.0 out of 5 stars Sweet Historical Romance
Reviewed in the United States on 27 July 2020
Verified Purchase
I enjoyed this story! A bit predictable because of the title, but enjoyable none the less! Although, I don't think young Sam's age was correctly described. There's no way a 5 yr old could take care of a newborn, and as a 7 year old, I doubt he'd be able to handle a 2 yr old completely on his own. And if Sam was such a horrible father, why would he read the letters from his mail order bride to the children?
Read more
Report abuse

ayrosita
4.0 out of 5 stars Touching
Reviewed in the United States on 17 March 2020
Verified Purchase
A story that touched the heart. A happily ever after for the rejected and abused that reminds us there is love to rescue us in the most helpless situations. Without being dismal we are given a glimpse of the harsh realities of the west, the resilience of children and the bond of family forged in communities that defy even blood relations.
Read more
Report abuse

Arlene Judy Esposito
5.0 out of 5 stars A Marshall for Christmas! Book 1
Reviewed in the United States on 30 July 2019
Verified Purchase
First time reading this Author and I'll be checking her others books out. Loved this sweet storyline and the wonderful characters in this book. My heart went out to Lottie and Archer. The two children and their dog melted my heart. No boring parts, just a well written story to follow to a well earned HEA. JudyE
Read more
2 people found this helpful
Report abuse
See all reviews
Back to top
Get to Know Us
Make Money with Us
Let Us Help You
And don't forget:
© 1996-2022, Amazon.com, Inc. or its affiliates