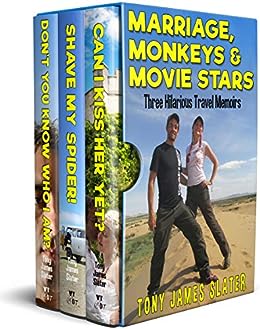 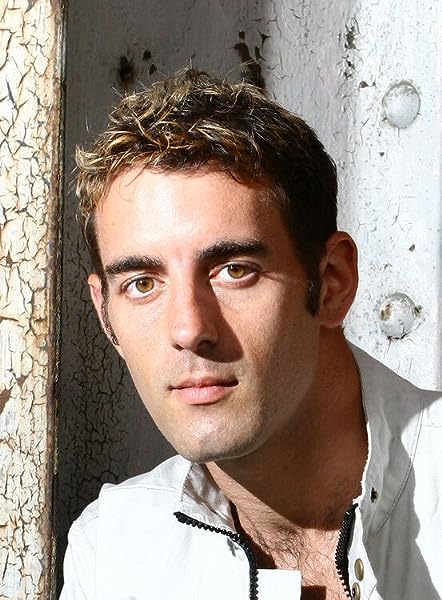 by Tony James Slater (Author) Format: Kindle Edition
See all formats and editions
Sorry, there was a problem loading this page. Try again.

Together for the first time! Three hilarious, bestselling memoirs that push the boundaries of acceptable behaviour.

Join Tony and Roo for the adventure of a lifetime – or three of them, all rolled into one! You’ll laugh and cry as they navigate true love, extreme travel and chasing their dreams…

Romance is in the air in ‘Can I Kiss Her Yet?’, as they design their dream wedding – but even the best laid plans can go astray, and if true love is going to conquer everything it had better get its skates on…
In ‘Shave My Spider!’ the happy couple set off on an epic trip: six months exploring the weirdest bits of Asia. What could possibly go wrong?
And in ‘Don’t You Know Who I Am?’, tall tales from Tony’s previous life as an actor prove the adage that you should be careful what you wish for… and that fame has a price.

Well over a thousand pages of heart-warming and hilarious misadventure, all for the heavily discounted price of 99c. Grab your copy today!

Can I Kiss Her Yet?

Tony James Slater is back!
This time he’s got only one thing on his mind:
Getting married.

It started so well – with a proposal that left bite marks, and Tony selling his body to medical science in exchange for the wedding budget…

Now, Tony and his bride-to-be must fend off randy camels, rapacious rodents and gigantic cardboard underpants – whilst traveling to Spain, the Middle East, and all over England.
This is a story of life, death, love, marriage, and everything in between.
It’s also the story of how not to plan a wedding.
And don’t get me started on the honeymoon!

Tony James Slater is quite possibly the world’s worst traveller.
And yet he’s about to embark on his most ambitious trip ever…

Faced with buying a car and getting a real job – or saying ‘Bollocks to that,’ and blowing all his savings on a six-month adventure around Asia… well, there really is no contest!

All he has to do is survive, despite being one of the clumsiest individuals on the planet. His rainbow-haired wife Roo is determined to keep him in one piece – but he’s not making it easy.
Six months around Asia will make or break them…
Literally.

Don’t You Know Who I Am?

Tony James Slater wants just one thing: to become a world famous actor.
The only problem is, he doesn’t have any experience.
Or any training.
Or any talent…

They say that anything is possible if you want it hard enough.
But just how far is he willing to go?

Is it ‘art’ to dance naked in public?
And what do you tell your family when they catch you doing it?
It’s a good thing to reach for the stars, right?
At least until their security guards drag you away…

Join Tony, as he goes from ‘wannabe’ to ‘never-gonna-be,’ via the weirdest, most ridiculous route imaginable.
​They say that drama equals conflict – and he is not going down without a fight!

Have you ever wondered just how much can go wrong with a wedding?
Or what they eat in Mongolia?
Or if you’ve got what it takes to make it in Hollywood?
Then download your copy and find out today!

***Click the big yellow 'Follow' button to get a message from Amazon when I publish a new book!***

Tony James Slater is an unusual combination of science-fiction author and travel-memoir writer.

He is a very, very strange man. He believes himself to be indestructible, despite considerable evidence to the contrary. He is often to be found making strange faces whilst pretending to be attacked by inanimate objects. But perhaps his biggest problem is this: he has a mouth so big he is at risk of swallowing his own head.

It is for this reason (amongst others) that he chooses to spend his life far from mainstream civilization, tackling ridiculous challenges and subjecting himself to constant danger. He gets hurt quite a lot.

For more information, or to complain about his shameless self promotion, please visit: www.TonyJamesSlater.com

But BE WARNED! Some of the writing is in red.

Tony LOVES it when you make contact - it makes him feel a little less lonely in this big ole' world.

And he blogs about how ridiculous his life is at: http://www.AdventureWithoutEnd.com

Please come and hang out, send a message or throw something sticky. But preferably not a stick...

jean henrickson
5.0 out of 5 stars A laugh a minute
Reviewed in Australia on 8 July 2021
Verified Purchase
I love Tony Slater’s books! His sardonic humour never fails to amuse! As in - whilst in Jordan genuine Bedouin artefacts were for sale. Some of these Bedouins seemed to live as far afield as China! His descriptions of travelling round the UK, mostly camping on a strict budget, are hilarious, but the extreme discomfort is skilfully portrayed. One can experience the wet tent and the stale sandwiches as if actually being with Tony and Roo. He is clearly a free spirit who is never fazed by the many ‘no entry’ signs he encounters on his travels. Above all it is his sense of humour that has me waiting impatiently for his next book!
Read more
Helpful
Report abuse

lLnda Bradlyey
5.0 out of 5 stars VERY FUNNY
Reviewed in Australia on 3 August 2020
Verified Purchase
I loved this book - it is hilarious and can't get enough of his stsorie.
Read more
Helpful
Report abuse

Albert Kramer
5.0 out of 5 stars My opinion.
Reviewed in Australia on 24 September 2020
Verified Purchase
A great read, havent finished it yet but enjoying the easy to read style of this author.
Read more
Helpful
Report abuse

MASD
5.0 out of 5 stars Do yourself a favour!
Reviewed in Australia on 16 July 2020
OK, I have read these memoirs in the original separate format; have read all Tony's books, except the science fiction, cos' I'm not a fan of Sci Fi. ALL his books have been a cracking good read, and I have laughed till my sides hurt!
This pair have such adventures, mainly due to Tony getting himself into improbable situations.... loved these books!!!

Elizabeth Moore
5.0 out of 5 stars Great Collection
Reviewed in Australia on 13 August 2020
Verified Purchase
This omnibus is an eclectic trilogy of crazy recollections in the lives of Tony and his partner, Roo. Suffice it to say that the reader is treated to a melange of very creative wedding preparations, perilous climbing adventures in Jordan, six weeks in Asia and an abortive attempt to become an actor. The author's writing is self-deprecating, frank and hilarious. From a stint as an extra on Coronation Street to an advertising gig in completely inadequate boxer shorts, the word 'idiot' appears regularly in the text. Asia never sounded so compelling and so repulsive in the space of several chapters; from stomach flu and a kamikaze 'yak-killer wasp' encounter to the indescribable beauty of Angkor Wat, the pair had some incredible adventures. I loved all three books even if I still haven't worked out the significance of the maraca at their wedding.
Read more
Helpful
Report abuse
See all reviews

PV
4.0 out of 5 stars Travel writer????
Reviewed in the United Kingdom on 8 November 2020
Verified Purchase
Was a good read. Tony is hilarious and probably would not have written this book if it wasn’t for Roo being his guardian angel
Read more
Report abuse

Amazon Customer
5.0 out of 5 stars So much fun
Reviewed in the United Kingdom on 9 December 2021
Verified Purchase
Tony writes really well. His stories are a laugh a minute. Well worth every penny. Thank you so much Tony.
Read more
Report abuse

Polly hd
5.0 out of 5 stars Couldn't put them down
Reviewed in the United Kingdom on 11 November 2021
Verified Purchase
I've managed to get thought all 6 books over the past few months. Would definitely recommend others to do the same.
Read more
Report abuse

Karen Piskun
5.0 out of 5 stars I thoroughly enjoyed this trilogy. Tony, you're both courageous and hilarious. I cant wait to read what happens next!
Reviewed in Canada on 1 August 2021
Verified Purchase
I highly recommend these books. In fact, in keeping with Tony's theme of inappropriate and self-deprecating humor, I have recommended this series to my 80 year old mother
Read more
Report abuse

S. Jackson
5.0 out of 5 stars Let’s try something crazy—OK, sounds cool
Reviewed in the United States on 14 July 2020
Verified Purchase
What a great deal to get 3 books at once!! Hopefully you have read his other books but if not you will still be amazed at these. Tony and Roo—what a lovely couple—well yes the word lovely fits but a lot of other words fit as well—nuttie, weird, dangerous—they will try anything and go anywhere to see what they can handle. Well, Tony pops the question and of course Roo says yes but where to get married and what to wear. How will it happen—and will it happen—most people would throw in the towel but not this duo!! I wonder how long they will be able to keep up their strength and health to keep going to countries that offer such crazy times. And then we get to learn about the movie star business—i do not want to give this away so I hope you will read this set of books because they are amazing.
Read more
3 people found this helpful
Report abuse
See all reviews
Report an issue
Does this item contain inappropriate content?
Report
Do you believe that this item violates a copyright?
Report
Does this item contain quality or formatting issues?
Report