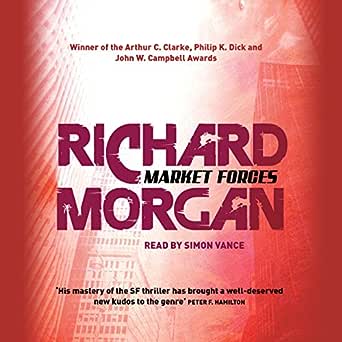 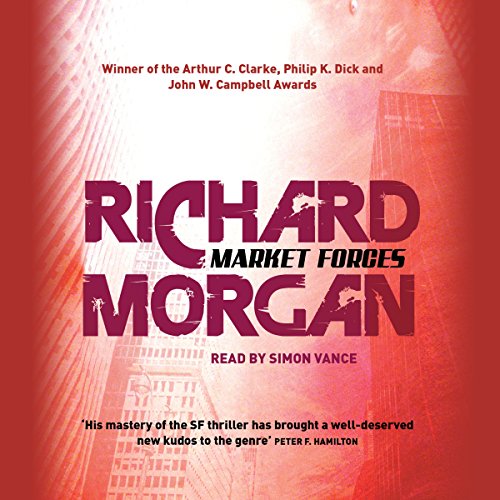 4.1 out of 5 stars
4.1 out of 5
144 global ratings
How are ratings calculated?
To calculate the overall star rating and percentage breakdown by star, we don’t use a simple average. Instead, our system considers things like how recent a review is and if the reviewer bought the item on Amazon. It also analyses reviews to verify trustworthiness.

Grant Dewar
4.0 out of 5 stars Not his best, but still a rolling Richard Morgan thriller
Reviewed in Australia on 31 March 2016
Verified Purchase
Didn't reach the heights of Takeshi novels but still an enjoyable read, if a bit predictable in parts.

Some good ideas, a few taken a bit far so that suspension of disbelief cracked a little but still very entertaining.
Read more
Helpful
Report abuse

Bertolt
4.0 out of 5 stars this is a somewhat thin book that feels like a short story stretched out
Reviewed in the United Kingdom on 15 December 2017
Verified Purchase
Wow, a Richard Morgan SF novel with only four stars.

First the negatives: this is a somewhat thin book that feels like a short story stretched out. The plot line is rather too reminiscent of those post-Thatcher TV dramas that supposedly critique rampant capitalism (hyperactive yuppies in smart suits living fast and making millions) but actually drool over it, and so, strangely, seems a bit over-familiar. The central idea - a kind of Death Race 2000 as a metaphor of dog-eat-dog capitalism - is terrific as a metaphor but is wholly implausible in the world of the novel.

That said, there is plenty to like. This is Morgan, so the writing is excellent. All the elements work perfectly together - the characters are vivid and plausible, the world (too like our own to really be SF) holds together flawlessly, the plot moves along at a good pace and is sufficiently interesting. Really, there isn't a faltering step. It's just that, compared to his other SF books, it's all a bit slight. I do recommend it unreservedly, as it is well worth a read, but it doesn't stack up against works like ALTERED CARBON or, especially, BLACK MAN.
Read more
6 people found this helpful
Report abuse

S. Hodgson
2.0 out of 5 stars Hard Work for nor so much rewward
Reviewed in the United Kingdom on 22 January 2021
Verified Purchase
This is a very well written/edited book. I am a great fan of the Kovach books by the same author. This book struggles to get going, and I am not sure where the story is going. IMO, not worth the effort. Very well written, but as far as I can see, pointless.
Read more
Report abuse

Roy Brookes
5.0 out of 5 stars Chillingly possible
Reviewed in the United Kingdom on 2 May 2010
Verified Purchase
The kind of world described in this book is all too chillingly possible, and intelligent people looking at what is happening in the World now are already worried. Richard Morgan's writing is very believable and he whirls you along his chosen path at breakneck speed. I love all of his books because they are all so different and anarchistic in a subtle way. I am not going to give away plot details as enough other people have done that already. I prefer to talk about the man's style, and he does have style. If you have never read any of his works, get them, read them, they are worth it. He writes the best science fiction I have ever read, and I have read all the "greats".
Read more
One person found this helpful
Report abuse

RM Wilkinson
5.0 out of 5 stars Compelling
Reviewed in the United Kingdom on 7 July 2018
Verified Purchase
Very well portrayed vision of what may be to come if corporate amorality is left unchecked. The hero is not sympathetically drawn yet the fallout from his flawed actions is believable and thoughtfully portrayed. Another excellent tale from Richard Morgan. Highly recommended.
Read more
Report abuse

Kindle Customer
4.0 out of 5 stars ChillingProphecy
Reviewed in the United Kingdom on 6 February 2018
Verified Purchase
Of the way Thatcher 's Britain could have turned out.
Re-read after 30 years, even more prophetic.
Not his best book, but easily the most thought provoking.😆
Read more
Report abuse
See all reviews
Back to top
Get to Know Us
Make Money with Us
Let Us Help You
And don't forget:
© 1996-2021, Amazon.com, Inc. or its affiliates