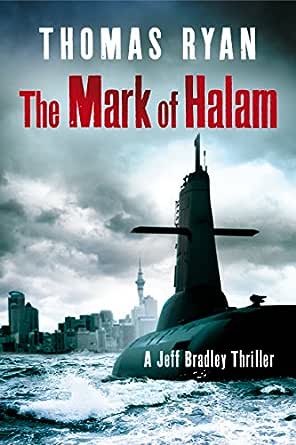 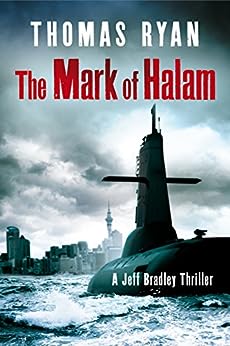 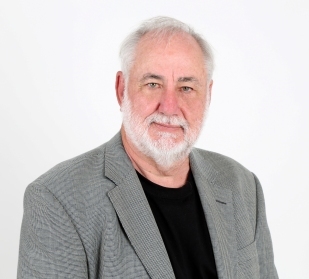 The Mark of Halam (A Jeff Bradley Thriller) Kindle Edition

When an Olympic medalist is the subject of an attempted assassination, former SAS trooper Jeff Bradley knows his past is once again casting a shadow over his new life. A note left by the assassin confirms his suspicions: Bradley made an enemy back in Kosovo, and the man is out for revenge. But Jeff knows the killer is not working alone: higher up the ranks sits Avni Leka, a terrorist warlord who will stop at nothing to achieve his bloody goal.

And it’s not just Bradley who is under threat. A hijacking leads him to sense something bigger is being planned—a plot that, if successful, will end thousands of innocent lives, and could light the touchpaper of global conflict.

He can’t allow it to happen. But events are spiralling out of control. Bradley knows he must reach the eye of the storm before it tears his world apart.

Thomas Ryan has been a soldier in a theatre of war, traded in Eastern Europe, trampled the jungles of Asia, and struggled through the trials of love and loss: ideal life experiences for a would-be author. Schooled by professionals who have helped him hone his literary style, Ryan is quickly establishing himself as a skilled writer of riveting thrillers and short stories. He considers himself foremost a storyteller, a creator who has plunged his psyche into the world of imagination and fantasy. Taking readers on a thrilling journey is what motivates Ryan as a writer.

Danny
5.0 out of 5 stars A Great Read
18 February 2016
Format: Kindle EditionVerified Purchase
This book had me from the first page until the last page. This thriller is set in New Zealand based around Jeff Bradley who has retired from the SAS and now runs a vineyard. His past involvement in Kosovo has consequences that finally catch up with him and to those people he holds dear in his new life, and ultimately to the national security of his country.
The story is faced paced and the characters are intertwined in an interesting way that keeps you wanting to read more of the book. Whilst being fictional the story line has you for most parts believing it could be possible.
This is one of those books I had trouble putting down and will be keeping an eye out for more books by Thomas Ryan.
Definitely would recommend this book

The USS Ulysses is due to sail into Auckland Harbour in a few days - the first nuclear vessel allowed in New Zealand waters in decades.

Protesters are being paid handsomely from a mysterious source, preparing to descend on the docks when the US Submarine arrives.

....and a well-planned and bizarre murder takes place in an Auckland suburb by a known terrorist.

What do all these things have in common?

I just loved the story. Very well written by a master storyteller, we're taken on a wild ride with Jeff Bradley, ex-SAS, who has a ruthless killer with terrorist ties seeking revenge hot on his trail; and Brian Cunningham, Jeff's old commanding officer and nemesis, and now head of Auckland Police Special Task Force, trying to uncover the terrorists plans, help Jeff and keep his job while he cuts the occasional legal corner.

For me, this is a must read.

Ken E
TOP 500 REVIEWER
3.0 out of 5 stars No sex please, we are New Zealanders
24 May 2016
Format: Kindle EditionVerified Purchase
This is a competently written thriller novel that keeps the reader interested despite the many holes in the plot. The setting is Auckland and there is a fine cast of goodie characters and some very nasty baddies. Despite the presence of both male and females, there is no sex at all and the relationships between Jeff and Mary and between Cunningham and Barbara never get beyond meaningful glances. As for the baddies, they have a monastic existence as they wait to carry out their terrorist acts.
Read more
One person found this helpful
Helpful
Comment Report abuse

Craig Hurdle
4.0 out of 5 stars Good read
9 January 2019
Format: Kindle EditionVerified Purchase
I gave this a four still a good book
It took a while to catch on with the story
Was about a nuclear submarine coming into New Zealand
Terrorists were out to stop the submarine coming into port
I did enjoy the story have not read any other books by this author
Read more
Helpful
Comment Report abuse

Alan G. Hider
TOP 1000 REVIEWER
4.0 out of 5 stars Authentic details make a formidable story
28 December 2017
Format: Kindle EditionVerified Purchase
The realistic setting in Auckland with an impending nuclear submarine visit sets the scene. The sense of humour is good and the only downside is perhaps a bit too much inter-personal details at times when action was happening. However doesn't prevent a totally engrossing read.
Read more
Helpful
Comment Report abuse

Kindle Customer FW
TOP 500 REVIEWER
5.0 out of 5 stars Must Read
11 January 2016
Format: Kindle EditionVerified Purchase
This is just another great book,why Jeff Bradley hasn't been snapped up by Hollywood I do not know.
The characters are believable and brought to life, by Thomas Ryan. In my opinion he deserves to rank with Child and Baldacchi, all of whose books I have read and enjoyed.
Can't wait for 3rd book.
Read more
Helpful
Comment Report abuse

Briana Ertanin
3.0 out of 5 stars If not for NZ set-up, complete miss
15 July 2016
Format: Kindle EditionVerified Purchase
I only bought this book because it was on special and because it is a story situated in NZ.
Apart from nostalgic thoughts of my former home city Auckland, there is noting else to entice reading this 2 dimensional plot.
Read more
Helpful
Comment Report abuse

Ros
4.0 out of 5 stars O
31 May 2016
Format: Kindle EditionVerified Purchase
Not too bad but a bit slow in places and predictable in others. Still a good story and a worthwhile read.
Read more
Helpful
Comment Report abuse
See all 48 customer reviews
Write a customer review

Go to Amazon.com to see all 274 reviews 4.0 out of 5 stars
Get FREE delivery with Amazon Prime
Prime members enjoy FREE Delivery and exclusive access to movies, TV shows, music, Kindle e-books, Twitch Prime, and more.
> Get Started
Back to top
Get to Know Us
Make Money with Us
Let Us Help You
And don't forget:
© 1996-2020, Amazon.com, Inc. or its affiliates