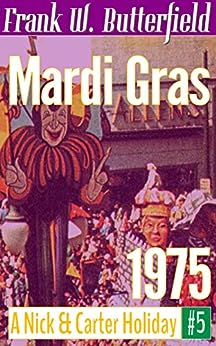 Ulysses Grant Dietz
5.0 out of 5 stars Each holiday is a jewel, rich in detail and emotion
Reviewed in the United States on 30 April 2020
Verified Purchase
I’ve been loving this series of holiday shorts. Frank Butterfield’s amazing creative imagination links each little episode some interesting part of gay history in America (good and bad), but also gives his readers quick views of Nick and Carter’s long life together.

This story was particularly special to me, because 1975 was a big year for in my life. During Mardi Gras, I was a sophomore in college. That summer, I turned 20 and celebrated by going to see “Jaws” with two childhood friends. That fall, I came out, and met the boy with whom I would stay for the next forty-five years. Now I’m older than Nick and Carter are in this story (53 and 55), and New Orleans is a city where I have family and lots of memories. Butterfield captures the spirit of the place and the time.

Nick and Carter, and their friends, are all part of my intellectual family. In this story they’re actually living in a world I knew and remember. Each installment of this series is a little jewel, rich in detail and emotion. The backlog on my Kindle is enormous, but I give Frank’s writing pride of place.
Read more
One person found this helpful
Report abuse

Pat
5.0 out of 5 stars another great holiday read
Reviewed in the United States on 29 February 2020
Verified Purchase
Nick and Carter are always enjoyable. They are old friends. This a very short read but there is still history to learn and new characters to meet. Glad there will be more on the way. Remember these are short, that is the way they are supposed to be
Read more
One person found this helpful
Report abuse

silvia
5.0 out of 5 stars Looooved this!
Reviewed in the United States on 18 September 2020
Verified Purchase
This had all the feels of Nick and Carter’s magic and what better way to celebrate their amazing relationship than during Mardi Gras in New Orleans. I felt like getting some beaded necklaces and flinging them at bystanders by the time I reached the end of this delightful short story.
Read more
Report abuse
See all reviews
Back to top
Get to Know Us
Make Money with Us
Let Us Help You
And don't forget:
© 1996-2021, Amazon.com, Inc. or its affiliates