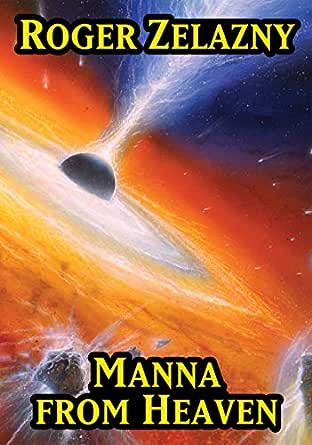 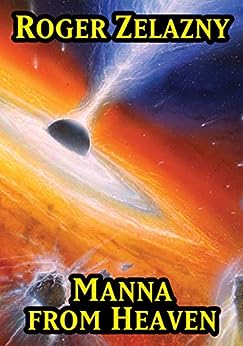 april
1.0 out of 5 stars double booking
Reviewed in the United Kingdom on 7 April 2021
Verified Purchase
i am being charged double for this...i have tried to get a refund, but it does not approve of my attempts...i do not want two copies of this...please fix!
Read more
Report abuse

Sue Bricknell
4.0 out of 5 stars Four Stars
Reviewed in the United Kingdom on 15 January 2017
Verified Purchase
BOUGHT IT AS A PRESENT.
Read more
Report abuse

T. D. Welsh
5.0 out of 5 stars Bits and pieces, variable... but it's *Zelazny*!
Reviewed in the United States on 8 April 2010
Verified Purchase
The title of this collection of short stories is very apt for those of us who long ago devoured all Roger Zelazny's novels and better-known shorts, and began looking around (in growing desperation) for our next fix. Copyright 2003, "Manna from Heaven" runs to about 240 pages and includes five (very) short stories from the Amber series, plus another 17 miscellaneous shorts ranging in length from one page to 37. There is also the brief prologue from the original edition of "Trumps of Doom" (one of the Amber series), which was previously available only in a limited edition of that book.

"Blue Horse, Dancing Mountains" briefly shows us Corwin some time after the cosmic showdown depicted in "The Courts of Chaos", when he declined the throne of Amber, engaged in an epic hellride on a sentient horse (reminiscent of Dilvish the Damned's Black). "Hall of Mirrors" carries this storyline forward a long way, with Corwin and Luke meeting in Castle Amber, only to find themselves under an enchantment and forced to duel to the death. "The Salesman's Tale" focuses on Luke, while he waits for Corwin's return and their fated clash. "The Shroudling and the Guisel" describes Merlin's unexpected meeting with an old flame (the shroudling of the title) and a virtually indestructible monster (the guisel) which has been sent to kill him. Last but not least, "Coming to a Cord" is told from the point of view of Frakir, Merlin's sentient strangling-cord, and takes up the story when Merlin's own guisel, homing in on the sorcerer who tried to assassinate him, oozes out through a mirror in Castle Amber itself. This story ends with a characteristic Zelazny aside, which serves very well to sum up the whole Amber series. "What do you think is going on, anyway?" Some horrible Wagnerian thing, I told him, full of blood, thunder, and death for us all. "Oh, the usual," Luke said. Exactly, I replied.

The other 17 stories are a mixed bag, covering a full three decades from the mid-1960s right up to Zelazny's death in 1995. The ones that impressed me most were "Come Back to the Killing Ground, Alice My Love", "Mana from Heaven", "Godson", and to some extent "The Furies" and "Kalifriki of the Thread" - although I have a feeling that I had read them all previously (with the possible exception of "Godson"). All five of those are good, solid tales written with genuine Zelazny ingenuity and flair, but for my money "Come Back to the Killing Ground..." is easily the best. A sequel to "Kalifriki of the Thread", it features a professional killer and troubleshooter who has domesticated a cosmic string. Very few writers other than Zelazny - perhaps none at all - could seamlessly combine the genres of serial murder, fantasy, detection, and science fiction so convincingly in a mere 37 pages. Those who read and appreciated "The Dream Master" may see a development of its themes in "Come Back to the Killing Ground..." "Mana from Heaven" (not a misspelling, rather a pun) is another fascinating adventure, about an undercover sorcerer who suddenly finds, when confronted by a pillar of fire, that his cover has been blown. But he doesn't know which of his colleagues wants him dead - and asking around could prove instantly fatal.

The remaining dozen stories are less satisfying, although some of them have the ring of genuine Zelazny. Others seem more like more or less tentative experiments. However, if you like Zelazny - or science fantasy and SF - you will find this book worth the investment of time and money.

Tech X
4.0 out of 5 stars Mainly for the hardcore Zelazny fan
Reviewed in the United States on 14 December 2014
Verified Purchase
I am a serious Zelazny fan and have been for 35 years, so I enjoyed this book. I've read virtually everything that he's ever written so this was enjoyable for me. Having said that, I think it's a book only hardcore fans will really enjoy. The stories are good especially the Amber related ones, which fill out some of the other books. The other stories are good too, but for the price I think any new reader would be much better off with the omnibus version "The Great Book of Amber".
Read more
Report abuse

D.Berdanis
3.0 out of 5 stars Hard to give a rating
Reviewed in the United States on 26 September 2008
Verified Purchase
In my mind I seperate this book into two sections.

The 6 Amber stories at the end of the book, I rate five stars. Any fan of the the first AND second Amber series will want to know what Zelazny had in mind following the last book of the second series. You can see his plans to possibly write a third series and where it would have headed.

The other stories, I rate two stars. I enjoyed the first two stories "Godson" and "Manna From Heaven", but after that I found the most of remaining stories very weak and unenjoyable. But your milage may vary.
Read more
One person found this helpful
Report abuse
See all reviews
Back to top
Get to Know Us
Make Money with Us
Let Us Help You
And don't forget:
© 1996-2021, Amazon.com, Inc. or its affiliates