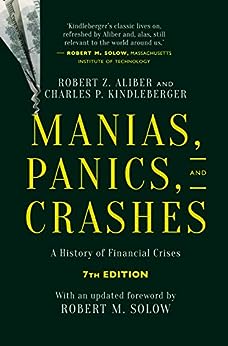 "The turmoil of 2007-8 reminded us only too painfully that financial crises are not confined to distant times and places. This latest edition of Charlie Kindleberger's classic study of man's serial financial follies, updated by Robert Aliber, brings the story right up to the present. A fount of wisdom not only for students of finance and economics, but also for central bankers and financial market practitioners." Professor Sir Charles Bean, The London School of Economics, UK

"Since its original publication, this has been one of my indispensable books. It served to help me grasp the gravity of financial crises that afflicted my country and guided me, hopefully, to recommend and take better policy decisions. It has also been an essential teaching tool. For example, on 15 September 2008 I asked my students to read at once several chapters so that they could better understand the events that started to unfold that morning. I welcome with enthusiasm this new edition!" - Ernesto Zedillo Ponce de León, Director Yale Center for the Study of Globalization; Former President of Mexico

"Underneath the hilarious anecdotes, the elegant epigrams, and the graceful turns of phrase, Kindleberger is deadly serious. The manner in which humans beings earn their livings is no laughing matter to him, especially when they attempt to do so at the expense of one another. As he so effectively demonstrates, manias, panics, and crashes are the consequence of an economic environment that cultivates cupidity, chicanery, and rapaciousness rather than a devout belief in the Golden Rule." - From the Foreword to the Fourth Edition by Peter L. Bernstein, author of The Power of Gold

"Alas, both the need for a book such as Manias, Panics and Crashes, and the coverage of its material, keep on increasing, almost exponentially. So much has happened in the last few years that this is now Bob Aliber's book, as much as, perhaps more, than Charles Kindleberger's. Aliber has enhanced the prior high standards that Kindleberger set. This is an easily accessible book, filled with fascinating historical vignettes, and one that everyone from the experts to newcomers to the field should read and would profit greatly by doing so." - Charles Goodhart, London School of Economics, UK

Robert Z. Aliber is Professor Emeritus of International Economics and Finance at the University of Chicago Booth School of Business, USA. He was director of the Center for Studies in International Finance; on the research staff for the Committee for Economic Development and Commission on Money and Credit; and senior economic advisor for the Agency for Economic Development, U.S. Department of State. Best-selling publications include The Reconstruction of International Monetary Arrangements (ed., Macmillan, 1986), The Handbook of International Financial Management (ed. Dow Jones Irwin, 1989), and Global Portfolios (co-editor, Business One Irwin, 1991). He is a co-author of Money, Banking, and the Economy (Norton, First Edition, 1981, Fourth Edition 1990), Manias, Panics, and Crashes: A History of Financial Crises (Palgrave MacMillan, 5th ed. 2005, 6th ed. 2011), and author of The International Money Game (Palgrave MacMillan, 2001).

Aliber has consulted to the Board of Governors of the Federal Reserve System and to other U.S. government agencies, the World Bank and the International Monetary Fund, testified before committees of the Congress, and lectured extensively in the United States and abroad.

The late Charles P. Kindleberger was the Ford Professor of Economics at MIT for 33 years and author of over 30 books. He was best known as a financial historian, whom the Economist referred to as 'the master of the genre' on financial crisis. He advanced the study of international finance and helped to devise the Marshall Plan, approved by Congress, for Europe's reconstruction after World War II. During his tenure at MIT, Kindleberger was a consultant to the federal government several times, most often for the Treasury and the Federal Reserve. In 1985, he was president of the American Economic Association.

4.2 out of 5 stars
4.2 out of 5
126 global ratings
How are ratings calculated?
To calculate the overall star rating and percentage breakdown by star, we don’t use a simple average. Instead, our system considers things like how recent a review is and if the reviewer bought the item on Amazon. It also analyses reviews to verify trustworthiness.

Richard Ballina
2.0 out of 5 stars Publishers should start offering discounted updates of their books
Reviewed in Australia on 12 July 2020
This is the seventh edition of this book. It wasn’t that long ago my sixth edition was released. I expect not much is new but the publishers hope you’re going to either ignore it or buy it again.

It’s a fairly marginal advantage for an existing owner. Personally, I’d be happy to buy an update, but not pay for the full book when little will be different. It’s the same with so many re-releases.

The publishers should enable people with existing Kindle versions to purchase the latest release at a significant discount.

This is something Amazon should explore with publishers as it’s likely to make everyone happy.

Kofi Atta
5.0 out of 5 stars Why crises occur
Reviewed in the United Kingdom on 11 November 2020
Verified Purchase
The book provides an understanding of the internal contradictions in capitalism and its tendency towards crises. Based on Minsky’s financial instability theory, the author extends the idea to look more broadly at the global financial system through the an examination of case studies, the most recent of which is the 2008 crisis.
Read more
3 people found this helpful
Report abuse

Claire Tyrrell
4.0 out of 5 stars Informative
Reviewed in the United Kingdom on 3 April 2021
Verified Purchase
Discovered quite a bit about why countries and organisations go into recession. Good historical accounts. Easy to understand.
Read more
One person found this helpful
Report abuse

Rita Howard
5.0 out of 5 stars GOOD DELIVERY AND LOOKS LIKELY TO BE AN INTERESTING BOOK
Reviewed in the United Kingdom on 27 December 2018
Verified Purchase
Bought as a xmas present and husband has started reading it and says very interesting.
Read more
Report abuse

tog
5.0 out of 5 stars fascinating, emphasizes human nature does not change, does ...
Reviewed in the United Kingdom on 13 January 2018
Verified Purchase
fascinating, emphasizes human nature does not change, does not learn from previous mistakes, and keeps repeating previous mistakes and always with the mantra "it will be different this time!"
Read more
2 people found this helpful
Report abuse
See all reviews
Back to top
Get to Know Us
Make Money with Us
Let Us Help You
And don't forget:
© 1996-2021, Amazon.com, Inc. or its affiliates