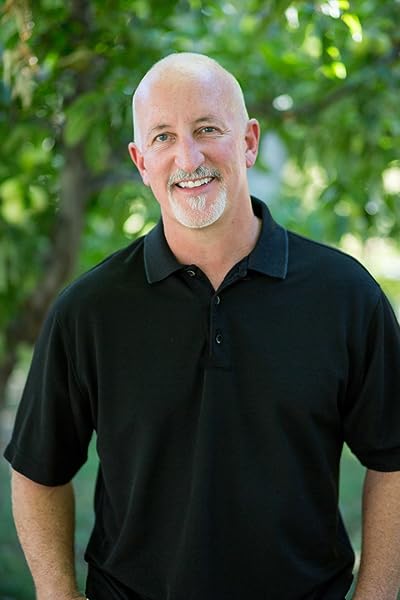 by James L Rubart (Author, Reader)
4.6 out of 5 stars 117 ratings
See all formats and editions
Sorry, there was a problem loading this page. Try again.

What if You Woke Up One Morning and the Darkest Parts of Yourself Were Gone?

Toren Daniels vanished eight months back, and his wife and kids have moved on--with more than a little relief. Toren was a good man, but carried a raging temper that often exploded without warning. So when he shows up on their doorstep with no notice, they're shocked to see him alive. But more shocked to see he's changed. Radically.

His anger is gone. He's oddly patient. Kind. Fun. The man he always wanted to be. Toren has no clue where he's been, but knows he's been utterly transformed. He focuses on three things: Finding out where he's been. Finding out how it happened. And winning back his family.

But then shards of his old self start to rise up from deep inside--the man kicked out of the NFL for his fury--and Toren must face the supreme battle of his life.

In this fresh take on the classic Dr. Jekyll and Mr. Hyde story, James L. Rubart explores the war between good and evil within each of us--and one man's only chance to overcome the greatest divide of the soul.

Page 1 of 1 Start overPage 1 of 1
Previous page
Next page
Start reading The Man He Never Was on your Kindle in under a minute.

James L. Rubart is 28 years old, but lives trapped inside an older man's body. He thinks he's still young enough to water ski like a madman and dirt bike with his two grown sons, and loves to send readers on mind-bending spiritual journeys they'll remember months after they finish one of his stories.

He's the best-selling, Christy Hall of Fame, Carol, INSPY, and RT Book Reviews award winning author of ten novels, co-author of the time traveling detective series, The True Lies of Rembrandts Stone, co-owner of The Rubart Writing Academy, and an audio book narrator. He lives with his amazing wife on a small lake in eastern Washington. More at www.jameslrubart.com More at http://jameslrubart.com/ and on Facebook: https://www.facebook.com/JamesLRubart

Fiction Aficionado
TOP 1000 REVIEWER
5.0 out of 5 stars Gripping and thought-provoking
Reviewed in Australia on 10 April 2018
Verified Purchase
Wow. The only coherent thought I had when I finished this book was, “I want what he’s having.” I may not have the same anger problem as Toren, but so many of the truths he works through in this story are truths that I still struggle with—and this book drove home just how much I still struggle with them. I feel like this book has opened the door to my own octagonal room (read the story and you’ll understand the reference), and just like Toren, I feel like I’ll need several visits so I can continue to absorb these truths into my heart. It’s one thing to know the truth at an intellectual level, but to feel the truth in your heart and live it out the way Toren must here? Wow.

This book doesn’t just reimagine The Strange Case of Dr. Jekyll and Mr. Hyde; it answers it. Robert Louis Stevenson presents half of the truth in his story—that it is impossible to bring Hyde under full submission through our own efforts—but he leaves the reader without the truth that there is One who DOES have the power to overcome Hyde. In fact, He has already done so. But in order to claim that victory as our own, we need to die to ourselves. We must overcome the evil with good, with love. Much easier said than done, as Toren discovers.

The real-life aspect of this story is just as compelling. Having believed Toren was dead for nine months, his wife hasn’t just moved on with her life; she’s relieved. She’s heard Toren’s promises of change hundreds of times before, and she’s not prepared to go down that path again, especially since she’s met Levi. Thus, Toren is not just seeking change for his own sake; he needs to defeat Hyde if he wants any chance at being reconciled to his wife and children, and somehow, he needs to prove that the change is real.

I was so intensely invested in this story that I had to put it down for about half an hour at the 80% mark. I wasn’t at all certain how it was going to play out, and I needed to take a fortifying breath, so to speak, just in case. Beyond that, I will simply say: This is gripping, thought-provoking storytelling. Don’t miss it.

I received a copy of this novel from the publisher. This has not influenced the content of my review, which is my honest and unbiased opinion.
Read more
Helpful
Report abuse

Rowelty
4.0 out of 5 stars Will you read this?
Reviewed in Australia on 10 February 2019
Verified Purchase
What appears to be an easy read turns out to be so much more. Will you read this? Will you join the story?
Read more
Helpful
Report abuse

Book Wolf
5.0 out of 5 stars So loved this story
Reviewed in Australia on 16 March 2018
So loved this story! Right from the start I was hooked by the writing. It was engaging, the story held my interest and I wanted to keep reading to see what would happen next. I found myself wanting the main character to succeed, and I liked the aspect of the interplay with Hyde.
I received a complimentary copy of this book from Thomas Nelson through NetGalley. Opinions expressed in this review are completely my own.
Read more
Helpful
Report abuse
See all reviews

John from Croatia
5.0 out of 5 stars The prodigal son
Reviewed in Germany on 16 September 2018
Verified Purchase
How do we see our heavenly Father, is he like our natural father or is he just the opposite? Do you believe that man, though created in God's image can be both good and evil. The dark side lives in us all and if we choose to feed on it's desires and craving, then evil will rule us as it did our character in this story. Nothing can separate us from the Father's love, only the choices we make in our daily lives. A lot to ponder and reflect on in this book. As always James Rubart never disappoints me and I look forward to reading his next novel that is on the way.
Read more
Report abuse

Sean Mark
4.0 out of 5 stars Captivating
Reviewed in Canada on 17 June 2018
Verified Purchase
I admire the authors work in demonstrating the human condition and the wrestle for divine supremacy. Some of the twists and turns were refreshing while others were predictable. I wonder about an alternate ending requiring a sequel with a very different storyline....less of a bow at the end. I look forward to reading more of his work as I love his style.
Read more
Report abuse

T Anderson
5.0 out of 5 stars Very good Read
Reviewed in Germany on 14 August 2019
Verified Purchase
I enjoyed the novell very much, als it encouraged me to also think about me and my life and Wehre my realationship to Jesus lays
Read more
Report abuse

Ian Acheson
5.0 out of 5 stars So loved the themes Rubart explores in this novel
Reviewed in the United States on 24 March 2018
Verified Purchase
Toren Daniels wakes up in a strange hotel. Alone and without any possessions. And short term memory loss.

But he remembers he's married, with 2 kids and where he lives. So he goes home, only to discover he's been gone 8 months, presumed dead. His family are shocked by his reappearance as they've moved on. And don't want him to come back home.

Very quickly he remembers why. Well bits of it anyway. Enough to know he'd made their lives hell since being kicked out of the NFL for anger management issues. He's determined to discover where he's been for the past 8 months and why all of a sudden he seems to have a handle on his anger. And why is an old school 'friend' he hasn't seen in 20-odd years suddenly reappeared in his life?

Using the timeless theme of the Stevenson classic story: Dr Jekyll and Mr Hyde as background Rubart weaves a wonderful tale of self-discovery of exploring the good and evil within each of us. And how we can claim victory over the evil or Mr Hyde-part of our personality.

I so enjoyed how Rubart addressed the theme in story. This is powerful story-telling and be great to see more novels fowling a similar bent of exploring how the Holy Spirit can indeed transform us from the inside out. The fruit of the Spirit of Galatians 2:22-23 is indeed available to us but only through the transforming work of the Holy Spirit as Romans 12:2 outlines.

Like all Rubart novels there's a bit of supernatural activity that can appear a little weird and out of place, however, in the context of the transformative power of the Holy Spirit he probably didn't have any other choice in being able to show the change in Toren's personality in such a short period of time. Something drastic did have to occur. In reality, it's unlikely that engrained habits can be transformed in such a short period of time. But, hey, this is fiction.

Toren and his estranged wife, Sloane, were excellent characters. There were some tremendous scenes featuring the two of them that showed the juxtaposition between what they once had, their current state and the possibility of a new improved version.

As an aside, I was reading this novel while I was on a 5 day retreat where I was studying and practicing models of personal transformation and it was fabulous to read something fictional that demonstrated the power of transformation. I'm sure this was part of the reason I so enjoyed the story and in particular, the themes Rubart addresses in it.

Laura Hamby
5.0 out of 5 stars I wish I could give it a thousand stars!
Reviewed in the United States on 15 November 2018
Verified Purchase
This book transformed my life!
Anyone who knows me well knows that saying I love to read is an understatement. I couldn’t begin to try to count the number of books I have read in my 55 years. Just now I finished my favorite book, other than the Bible, that I have ever read in my life! If I had the money I would give a copy to everyone willing to read it with their hearts and not just their heads. It was more than mind blowing! It was heart restoring. I believe with my heart that God lead this man to write this book! The Man He Never Was by James Rubart will take you on a journey through a man’s life and in a way your life and mine!
Read more
9 people found this helpful
Report abuse
See all reviews