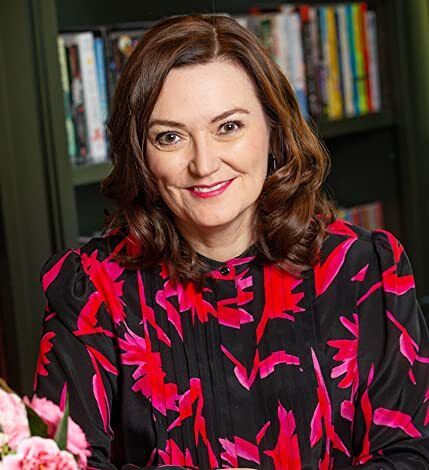 by Siobhan McKenna (Author)
3.6 out of 5 stars 89 ratings
See all formats and editions
Sorry, there was a problem loading this page. Try again.

Page 1 of 1 Start overPage 1 of 1
Previous page
Next page
Start reading Man in Armour on your Kindle in under a minute.

Siobhan McKenna is chairman or director of several companies including Foxtel, Nova Entertainment, Woolworths and Illyria. During her career she has worked in telecommunications, oil and gas, healthcare and government. She was a commissioner of the Australian Productivity Commission, a chairman of NBNCo and a partner of McKinsey & Company. She lives in Melbourne with her husband and three teenage sons. Man in Armour is her first novel.

3.6 out of 5 stars
3.6 out of 5
89 global ratings
How are ratings calculated?
To calculate the overall star rating and percentage breakdown by star, we don’t use a simple average. Instead, our system considers things like how recent a review is and if the reviewer bought the item on Amazon. It also analyses reviews to verify trustworthiness.

Ruby
5.0 out of 5 stars A peak behind the curtain
Reviewed in Australia on 4 October 2020
Verified Purchase
I couldn't put Man in Armour down. With each turn of the page I was drawn into the complex and compelling life of Charles. It offers a peak behind the curtain, capturing a world known by few, and the pull of love, desire, family, power and money. A must read.
Read more
3 people found this helpful
Helpful
Report abuse

Johnnyk
4.0 out of 5 stars The business man defrocked
Reviewed in Australia on 14 September 2020
Verified Purchase
Excellent descriptive book showing the underbelly of working In the top end of town and how the relentless pressure can take its toll.
Read more
3 people found this helpful
Helpful
Report abuse

Irene Stephen
1.0 out of 5 stars Disappointing
Reviewed in Australia on 11 January 2021
Verified Purchase
Considering all the hype around the release of this book on radio & tv it was very disappointing.
Read more
Helpful
Report abuse

narelle weatherall
5.0 out of 5 stars Heard only great things of it
Reviewed in Australia on 13 January 2021
Verified Purchase
Have not read it yet but looking forward to it
Read more
Helpful
Report abuse

Amazon Customer
5.0 out of 5 stars Gripping
Reviewed in Australia on 18 December 2020
Verified Purchase
Confronting, a sad unlikable character until you realised his need for armour.
Read more
Helpful
Report abuse

John Dryden
5.0 out of 5 stars Business, power, money and sex! Just Brilliant!
Reviewed in Australia on 26 October 2020
After connecting with the characters in the first few chapters, and the protagonist Charles, I became fully immersed in this book! There was someone in everyone that I identified with! Outstanding! Great present 🎁 for Christmas 🎄
Read more
One person found this helpful
Helpful
Report abuse

Beth
5.0 out of 5 stars A must read
Reviewed in the United Kingdom on 24 August 2020
Verified Purchase
Heartbreaking, pacey, unforgettable. Man in Armour is a triumph. A human story set in the cut throat world of big business. A story of survival, success and for me, ultimately, healing. I could not put it down.
Read more
Report abuse

CannyReader
2.0 out of 5 stars Disappointing
Reviewed in the United States on 15 December 2020
Verified Purchase
I don’t usually write reviews but made an exception in respect of Man in Armour. Great title for a novel, but that’s where it ends.

The characters are little better, and there are more than a hundred (a Grisham novel typically has between 50 and 60). Worse, they seem to appear as and when needed. For instance, ‘Helping David. Helping bloody David. So Keith had attended last month’s TelcoTalk meeting alone.’ I immediately backtracked as I couldn’t recall Keith … no wonder this was his first appearance. The author has a propensity to create characters as they’re needed.

Then there are the character’s names. Grey Grooved Host, Peter Pinstriped, The Grocer, The Two-Bit-Miner, The Stone Subjugator, The Cravat, Toad of Toad Wall, The Grizzly, Lanky legal, The Signet Ring director, etc. I am a prolific reader of business novels and have never read anything like this before.

Man in Armour is the title, but I never expected metaphorical armour descriptions throughout the novel.

The main character is pathetically weak, best illustrated when he attends a board meeting and recognizes someone from his past, and goes into meltdown.

More generally, shoulder is one of the author’s favorite words, but its use is inappropriate in some instances. ‘Simon shouldered into Charles’s office.’ Naomi became Noami. ‘The meeting wrapped as usual by each of them indicating …’ ‘Needs must when women work, I suppose.’ These are editing oversights and are not problematic as it is rare to read an error-free novel.

I usually finish a novel in one night. Man in Armour was slow, and I struggled to read it over four nights. It was disappointing. For those into business books, I recommend Michael Lewis’s Liars Poker, and The Money Culture, Greg Smith’s Why I Left Goldman Sachs, and virtually anything by John Grisham or Scott Turow.
Read more
Report abuse

adam edmondson
5.0 out of 5 stars Cracking read
Reviewed in the United States on 16 January 2021
Verified Purchase
I thoroughly enjoyed it. The story starts with a fascinating insight into high-level business dealings and sheds light on this fast-paced and cut-throat world dominated by greed and male power better than other corporate-based novels I've read. It's clear the author knows her stuff.
I warmed to the main character as it progressed and as his more personal back story is revealed. The writing is precise and clever and makes for an exciting read. Can't wait for the next one!
Read more
Report abuse

Catherine
5.0 out of 5 stars Great insider view to fast paced world of clinical domination. Couldn't put it down
Reviewed in the United States on 25 August 2020
Verified Purchase
Love it! Fast paced and relevant. I couldn't put it down. disappointed that Amazon has the wrong Author Profile - this was written by Australian business legend Siobhan McKenna which makes it all the more interesting as her perspective being a global business power broker and true "insider" the story likely draws from her own experiences with men just like the main character Charles. Great debut!
Read more
Report abuse
See all reviews
Back to top
Get to Know Us
Make Money with Us
Let Us Help You
And don't forget:
© 1996-2021, Amazon.com, Inc. or its affiliates