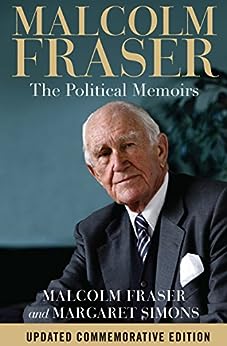 UPDATED COMMEMORATIVE EDITION
The commemorative edition includes a postscript by the co-author Margaret Simons, reflecting on her insights of the former Prime Minister. --This text refers to the paperback edition.

Malcolm Fraser was born in May 1930 and entered federal parliament in 1955 after graduating from Oxford University. He served first as Minister for Army and later as Minister for Defence, and Education and Science.
He became Prime Minister on 11 November 1975 following the dismissal of the Whitlam Labor Government. He resigned from parliament following the March 1983 election defeat after nearly 28 years as the Member for Wannon.
From 1989, Fraser played a key role in bringing an end to apartheid in South Africa as co-chairman of the Commonwealth appointed Committee of Eminent Persons. He was founding Chairman of CARE Australia from 1987 to December 2001, and also served as President of CARE International. He remained at the forefront of political and social debate.

Margaret Simons is a freelance journalist and writer, and also a senior lecturer at Swinburne University of Technology. She has written numerous books and essays, including The Meeting of the Waters, about the Hindmarsh Island Bridge Affair, and The Content Makers- Understanding the Australian Media. She lives in Melbourne with her husband and two children. --This text refers to the paperback edition.

"Readers [are] amply rewarded with this rich addition to the political canon." --Canberra Times

"Replays the reader's effort with an extraordinary life story supported by a great depth of research and Simons' accomplished writing." --Australian Bookseller & Publisher

"""Readers [are] amply rewarded with this rich addition to the political canon." --"Canberra Times"

"Simons is a master storyteller." --"Weekly Times" --This text refers to an alternate kindle_edition edition.