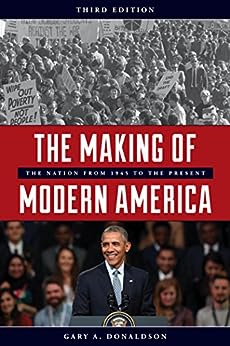 The Making of Modern America: The Nation from 1945 to the Present 3rd Edition, Kindle Edition

By far the best text available for post-1945 U.S. history courses. Donaldson deftly integrates political, diplomatic, social, and cultural history in a style that will engage undergraduates. Especially interesting is his treatment of science and medicine, important topics often receiving scant attention in textbooks. I plan to adopt The Making of Making of America in my own course. -- Anthony O. Edmonds, George and Frances Ball Distinguished Professor of History, Ball State University The Making of Modern America is detailed enough without losing sight of its central themes. It also leaves room for disagreement with some of the interpretations. Very readable! -- John Stranges, University Professor, Niagara University Gary Donaldson's sparkling book begins like Only Yesterday and ends like yesterday's New York Times. It is our story-how America and the Allies' triumph in World War II opened doors of bright possibilities that ended in nightmares. From Hiroshima to Baghdad, from prosperity to economic collapse-Donaldson's book makes sense out of the dreams of the Baby Boomers and the angst of Generation X. It is the story of bold plans and unintended consequences. -- Randy Roberts, Distinguished Professor of History, Purdue University In The Making of Modern America: The Nation from 1945 to the Present, Gary A. Donaldson makes a valiant effort to take his student readers from... the bombing of Nagasaki to the inauguration of Barack Obama... Will students find basic facts here? Yes. The Journal of Southern History --This text refers to an out of print or unavailable edition of this title.

Gary A. Donaldson is the Keller Foundation Chair in American History at Xavier University of Louisiana in New Orleans. He is the author of numerous books on American political and diplomatic history, including,The First Modern Campaign: Kennedy, Nixon, and the Election of 1960, Liberalism's Last Hurrah: The Presidential Campaign of 1964,Truman Defeats Dewey, and America at War since 1945. --This text refers to an out of print or unavailable edition of this title.

virginia
5.0 out of 5 stars Recommend! Great history book!
Reviewed in the United States on 21 March 2021
Verified Purchase
I used this textbook for Modern History class. People who are interested in history or would like to make sense of politics and events throughout the world should read this book to get a broad picture and information not only from the American perspective! Learned so much !
Read more
Report abuse

Nicholas L. Smith
5.0 out of 5 stars Great read
Reviewed in the United States on 15 July 2020
Verified Purchase
A great read for you as either a lover of history or just for students. This was recommended in college.
Read more
Report abuse

Della
5.0 out of 5 stars Old & New around the world
Reviewed in the United States on 14 March 2020
Verified Purchase
Enjoy reading the book , very detail information within the reading
Read more
Report abuse

Cyn
5.0 out of 5 stars bought for history class but would read anyway
Reviewed in the United States on 10 July 2013
Verified Purchase
well written and interesting. was assigned for a history class but I enjoyed it so much I passed it on...
Read more
Report abuse
See all reviews
Back to top
Get to Know Us
Make Money with Us
Let Us Help You
And don't forget:
© 1996-2021, Amazon.com, Inc. or its affiliates