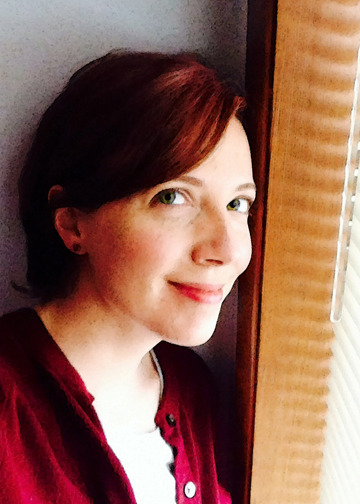 by Meg Maguire (Author)
4.2 out of 5 stars 6 ratings
See all formats and editions
Sorry, there was a problem loading this page. Try again.
Read more Read less

Before becoming a writer, Meg worked as a record store snob, a lousy barista, a decent designer, and an over-enthusiastic penguin handler. Now she loves writing sexy, character-driven stories about strong-willed men and women who keep each other on their toesand bring one another to their knees. Meg lives north of Boston with her bearded husband. When she's not trapped in her head she can be found in the kitchen, the coffee shop, or jogging around the nearest duck-filled pond.
Start reading Making Him Sweat (Harlequin Sports Romance Book 3) on your Kindle in under a minute.

Review
Jenna Wilinski is back in Boston after moving away as a child with her mother when her parents divorced. After their divorce, her father was involved in a scandal with the gym he owned. He was acquitted on a technicality, but the taint of the scandal never left and even after his death, the gym is still considered unsavory. Jenna didn't have contact with her dad while she was growing up, and surprisingly, when he died he left her the gym and the building it's housed in. The building includes space for another business and an apartment above. Jenna wants to open a branch of a national matchmaking service, Spark, in the extra space and move into her father's apartment upstairs.

Mercer Rowley manages Wilinski's Gym. He's a former semi-pro boxer/MMA fighter, and Jenna's dad was his mentor. He was like a father to Mercer when he was a young angry kid needing guidance, and as he grew older he cared for Jenna's dad through the illness that eventually killed him. During the last months of his life, Mercer moved in to the apartment to better care for him.

Jenna's got big plans for Spark, plans that include closing the gym, and Mercer is trying to convince her to give it, and the young guys he mentors there, a chance. What neither of them expects is their attraction to each other despite their opposing goals.

I think this might be the first Harlequin Blaze that I've read, and I liked it! It's by Meg Maguire, so I knew it would be sexy, but I was surprised at how sweet it was given the occupation of the hero. I loved Mercer: he's a rough-edged hero who's pragmatic but fights for what he thinks is right. I like that Ms. Maguire sets him up as not traditionally attractive, but he's such a nice guy that Jenna's attraction continues to grow as the story moves on.

The gym storyline was interesting and I spent the whole book pulling for them to find a way to save it (I won't spoil it and tell you if they did or not). It was bittersweet that the guys in the gym seemed to know everything about Jenna, but she knew nothing about her father or his life. I could feel Mercer's conflicted emotions between his feelings for Jenna and his loyalty to her father's gym and clients. He really was a `stand-up' guy and I loved every sexy, sweaty minute of his page-time!

Jenna's story involved getting to know her father a bit more, even though he's dead; not only through Mercer, but through the things he left behind. Add in her dreams of opening Spark, her growing desire to keep the gym open, and her growing feelings about Mercer, and you've got a great read on your hands.

Ms. Maguire wrote some great secondary characters, and I hope a certain pair get their story in the next book.

There were some aspects to the story that I thought were "easy outs" and I kind of rolled my eyes over that, but overall I enjoyed Making Him Sweat and am going to pre-order Taking Him Down (book 2).

Recommendations:
I think Making Him Sweat will appeal to fans of sports-themed romance, although there's not a lot of action in that area. Also, readers who like the romance without a lot of external conflict (ie: kidnappings, misunderstandings, etc.).

Anagram
4.0 out of 5 stars A good guy to measure real-life men by
Reviewed in the United States on 3 April 2013
Verified Purchase
Jenna and Mercer are cute together, but it's Mercer who makes the book. He's a good guy who cares about Jenna and goes out of his way to make sure she's all right, just because he was raised the right way and does the right thing, not because he wants something from her (even though he also wants something from her.) It made the relatively quick way that Jenna and he fell in love more believable - there wasn't a big change that required a lot more time and effort to work through.

A short, easy read that is sweet and sexy!
Read more
Report abuse

Kindle Customer
5.0 out of 5 stars A TKO
Reviewed in the United States on 23 June 2013
Verified Purchase
I am not a typical Harlequin reader, but I am definitely a Meg Maguire/Cara McKenna fan. Making Him Sweat does not disappoint, and really highlight's the author's ability to embrace the very real and gritty nature of romance. Readers looking for a billionaire prince to sweep them into fantastical fairy tale romance might consider looking elsewhere. Realistic, humanistic, and leaving room for work and growth is what this new series offers, and I can't wait for the next one coming out in July.
If you liked this style, try After Hours by Cara McKenna, Maguire's alter-ego; it's even better.
Read more
Report abuse

CJP Sac
5.0 out of 5 stars I adored this simple, sweet story
Reviewed in the United States on 17 April 2013
Verified Purchase
This story really hits the sweet spot for me. There is no high drama, no tantrums, no dumb fights. It's two people in a difficult situation who are kind to each other and choose love. It's a simple, small story and it's wonderful.
Read more
Report abuse

Jenny
5.0 out of 5 stars I really enjoyed this book
Reviewed in the United States on 18 May 2013
Verified Purchase
I really enjoyed the story in this great book. I could not put it down till I finished reading it.
Thank you so very much for writing it.
Read more
Report abuse
See all reviews
Back to top
Get to Know Us
Make Money with Us
Let Us Help You
And don't forget:
© 1996-2021, Amazon.com, Inc. or its affiliates