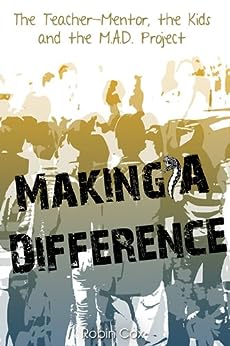 by Robin Cox (Author) Format: Kindle Edition
See all formats and editions
Sorry, there was a problem loading this page. Try again.
16-year old LISA COURT confronts her demons: negative peer pressure, antisocial behaviour, drifting with the crowd at the expense of reaching her potential. Inspired by her teacher, CJ KRISTEN, Lisa launches the M.A.D. (Make A Difference) project which transforms a school, a community and, eventually, due to the power of the internet, goes global. During this time she discovers love eternal.

CJ Kristen is Head of the Business Economics Faculty at Hillfield College, a school which has been through difficult times. Recently appointed Principal, MORGAN RIKA, has the challenging task of turning around the school's fortunes in the middle-class suburb of Hillfield, situated on the North Shore of Auckland, New Zealand. He wants to harness the special talents he believes CJ possesses to achieve this goal.

CJ inspires and motivates his Year 12 Business Economics class to undertake a project of their choice after he shares the Parable of the Bean with them, an allegory about seizing the moment, envisioning and dreaming about what can be. The lives of the students in this class, which eventually becomes known as Class 27 (27 students in the class), are thrown into turmoil, as they must decide whether or not to change their lifestyles and attitudes and become change agents within their own school community.

Author Bio: Robin Cox has been an educator in multicultural environments for 37 years – as a principal, sports coach, boarding housemaster, symposium organizer and life skills facilitator. During that time he has also mentored about 1000 adolescents and, since 1999 has trained over 700 volunteer adult mentors. His passionate promotion of the spirit of mentoring has encompassed developing mentor training programs and manuals, as well as running seminars and workshops for teachers, youth workers and tertiary education providers. Married with two adult children, he is currently living and working in Brisbane, Australia as an Associate Head, Executive Director of Faith and Community, at a Co-educational school of 1500 students in north Brisbane. He is the author of four professionally published non-fiction books linked to youth mentoring by Essential Resources (New Zealand) and two professionally edited and self-published (by choice) non-fiction books promoting the spirit of mentoring and encouraging young people to become the best they can be. He has written under a pseudonym for a UK Parenting organization. His interests include watching most sports, jogging, fishing, tramping, mentoring people of all ages and writing.

In 1995 Robin was awarded a U.S. Grant and spent six weeks at Fordham University studying 'Thomas Jefferson – his political thoughts and action'. In 2006 Robin was awarded a Churchill Fellowship, which saw him travel to Canada and the USA visiting youth mentoring and other youth related organizations. He has his own website which he operates as a community service to those interested in youth mentoring and encouraging young people to reach their potential (www.yess.co.nz). He has coached and been involved in sport to a National level.

Robin enjoys writing, his major motivation being to inspire young people to reach their potential, to become the best they can be through the powerful medium of story-telling.

Rob
5.0 out of 5 stars A must read for teenagers and all working with them
Reviewed in Australia on 21 June 2014
Verified Purchase
The challenges of being a teenager in the 21st Century are highlighted in this action-packed novel. The power of peer pressure, both positive and negative, is highlighted and the positive impact of a dedicated teacher on a challenging class of students creates a story that seems so true to the experiences of today's youth. I'd recommend it to all teenagers, teachers working with adolescents, parents and those who voluntarily mentor our youth. Inspirational, motivational, yet laced with humor and an easy read with a powerful message.
Read more
Helpful
Report abuse

Trish
5.0 out of 5 stars An inspirational, easy read
Reviewed in Australia on 29 May 2014
Verified Purchase
This is a must read for youth and those that work with them. Through Lisa's journey, teens are encouraged to see that it is a realistic possibility to make a positive contribution to the world around them. At the same time, teachers and youth workers are reminded about the powerful influence they can hold in the lives of their students. A story that you will not regret reading.
Read more
One person found this helpful
Helpful
Report abuse

Paul Browning
5.0 out of 5 stars Powerful reminder
Reviewed in Australia on 4 May 2014
This story about a group of teenagers is a powerful reminder of what a remarkable, positive difference good mentoring (teaching) can make in the life of a young person. As teachers we should never under estimate the impact we can have on young lives, an impact that we may never see the fruits of.
Read more
One person found this helpful
Helpful
Report abuse
See all reviews
Report an issue
Does this item contain inappropriate content?
Report
Do you believe that this item violates a copyright?
Report
Does this item contain quality or formatting issues?
Report