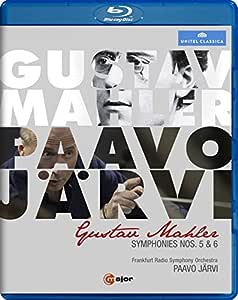 Format: Blu-ray
3.2 out of 5 stars 4 ratings
International product from outside Australia

This Blu Ray C Major Entertainment release of Gustav Mahlers Fifth and Sixth Symphonies continues the issuance of the complete, acclaimed Mahler cycle with Paavo Järvi and the Frankfurt Radio Symphony Orchestra, which since the 1980s and the release of Eliahu Inbals FRSO Mahler cycle has come to be known as a powerful Mahler orchestra (Frankfurter Rundschau). As on previous releases, conductor Paavo Järvis learned and probing introductions to the symphonies heard on the accompanying release are a worthy and self-recommending bonus feature.

Amazon Customer
2.0 out of 5 stars The cute blonde is gone
3 April 2015 - Published on Amazon.com
Verified Purchase
The only positive to this interpretation of Mahler was a cute blonde who they made sure to frame about every 30 seconds in the first 2 DVDs he recorded.. That is, when they were not showing off the maestro' s rather poor imitation of Bernstein. I mention the cute blonde because she was featured in the first 2 DVDS and took my mind off the horrid program that was transpiring..
This is perhaps the worst interpretation of Mahler that I have ever seen or heard. The orchestra is too young to understand Mahler and the Maestro proves that his years did not help him understand Mahler either. It really is sad that there is not a Mahler business. All a conductor has to do is record Mahler and he sells albums CDs or DVDs. Save your money. Lately there have been quite a few Mahler conductors. Janseos, Chailly and others. You should put your money there and forget this DVD. As a matter of fact put your money on Berstein

Vadomac
1.0 out of 5 stars Good music in clear and honest readings. One star for the poor video quality and deceptive advertising
27 August 2015 - Published on Amazon.com
I have purchased the whole set (including all the 9 symphonies plus the Adagio from the 10th symphony spreaded in five bluray discs) from a different seller and I'm including this review here at Amazon with the sole purpose of raising some awareness among the readers of these reviews who might be looking for some information about purchasing these symphonies on Blu-ray. Overall, the quality of the recorded sound is good, although the acoustics varies along the cycle. The symphonies recorded in churches, tend to be a tad too reverberant and the symphony nr. 1, recorded in a concert hall, presents a drier and more definite sound image (and a better picture!). Mr Jarvi, in my opinion, is not a natural Mahlerian, like, for example, the late Claudio Abbado however, these are good and honest performances by a good German orchestra conducted with careful attention to detail. The great deception is the VIDEO QUALITY of the whole set. As another reviewer mentioned, excepting the symphony number 1, all other symphonies were recorded on DVD quality upscaled to 1080i. Picture is consistently blurred in all recordings, except the recording of the first symphony. It is clearly printed on every case case insert “MASTERED FROM AN HD SOURCE”. This statement is FALSE. Unfortunately, there are no compensations for such kind of deceptions, except returning the merchandising and getting your money back. Who is to blame? CMajor entertainment for releasing a product which does not correspond to the description? The Hessischer Rundfunk and UNITEL CLASSICA for allowing CMajor to falsely advertise a videogram as High Definition instead of DVD quality? Where I live there are no laws such as in the US to protect consumers from false or misleading advertising. Deceptive claims are illegal and the culprits should be adequately fined. If you really need to buy this set, be prepared for the poor video quality.
Read more
3 people found this helpful

Barry Guerrero
5.0 out of 5 stars A great Mahler 5 with an outstanding horn soloist, while this Mahler 6 has a fabulous scherzo. 'Boomy' acoustics contribute.
27 April 2015 - Published on Amazon.com
I wasn't planning on picking this up (DVD's, not BluRay). But since Paavo Jarvi does such a good job with Stravinsky's "Rite of Spring", I had a sneaky hunch that he would do the scherzo to Mahler 6 really well (placed second in his performance). Boy, was I ever right. This is one of the finest performances of the scherzo I've ever heard - a movement that often times gets treated as though it were an afterthought to the other three more 'weighty' movements of the symphony. Not surprisingly, Jarvi discusses the merits of this particular movement in the brief interview with him at the end (interviews with Paavo Jarvi are included with all of his Mahler performances on this C Major cycle). The other three movements are fine too, if also conducted in a more 'straight forward', non-interventionist fashion. Two hammer strokes are included in the finale, but the second one - reinforced with tam-tam and cymbals - is quite a doozy! Once again, these performances were captured in the somewhat reverberate acoustics of Kloster Eberbach in Rheingau (closer to Wiesbaden than Frankfurt). Not inappropriately, the lower end of the orchestra comes off stronger than usual: double basses, celli, tuba, bass drum, timpani, tam-tam (large gong), etc. All of this helps to reinforce the weighty and dark character of Mahler's 'tragic' A-minor symphony. With such a strong and meaningful performance of the multi-faceted scherzo, this comes off as a very 'integrated' rendition.

The performance of Mahler 5 (disc 1) is, in my opinion, quite outstanding. If anybody wishes to sample this for themselves, there's a complete Mahler 5 on Youtube with the same people (P. Jarvi/Frankfurt Radio Symphony), only captured on tour in Seoul, Korea (the audience goes bonkers!). In this particular case, the less reverberate acoustics of the hall in Seoul is more appropriate for the fifth symphony, which is perhaps Mahler's most 'contrapuntal' symphony (more J.S. Bach like). Still, this one captured for DVD/BluRay in Kloster Erbach is quite good, and it features truly outstanding solo and obbligato horn work in the middle movement scherzo from principal hornist Samuel Seidenberg. As is sometimes the practice these days, Seidenberg plays the scherzo from a standing position at the front of the orchestra. He's superb! Overall, this is good as any Mahler 5 in my collection, with Jarvi taking a somewhat lively yet highly flexible approach to the famous Adagietto for strings and harp (in this recording the harp might actually be balanced a tad too far forward, for once). I really enjoyed this Mahler 5. While these performances may not be 'earth shaking' in terms of new insights or weird interpretations, they're remarkably solid and committed performances. Anyone wanting these two symphonies together won't go far wrong.


Read more
4 people found this helpful
Go to Amazon.com to see all 3 reviews 2.6 out of 5 stars