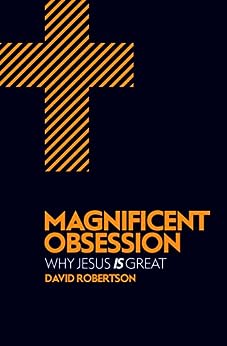 Meg22
5.0 out of 5 stars David Robertson is the best modern Christian Apologist.
Reviewed in the United Kingdom on 28 April 2021
Verified Purchase
Those who have searched for spiritual truth and had their backs against the wall will know there is only one name in which they are saved. Jesus Christ.
Those who have not will probably not be won over by intellectual arguments.
I would highly recommend the many utterly compelling "New Age to Jesus" testimonies on YouTube as the front-line of where the truth lies!
However, with the many high-profile anti-Christians around now, and the general acceptance without thought that Christianity is ridiculous and harmful, it is important to address the usually unspoken so-called "arguments" against Christianity head-on.
For me this and David Robertson's other book, "The Dawkins Letters", do the best job.
He is concise, highly readable, not religiously partisan, and addresses the intellectual, emotional and spiritual issues involved in thoughtful, well-rounded, intelligent ways based on vast reading, study and experience.
Read more
Report abuse

Ian McGregor
4.0 out of 5 stars No need to apologise!
Reviewed in the United Kingdom on 19 May 2014
Verified Purchase
As good a book on Christian apologetics as I have read for many a year. As David says, we have no need to apologise for our Christian faith but we need to be able to "give a reason for the hope that is in us". David is well able to do that. Christian readers of this book will be better able to do so as a result of thoughtful and prayerful reading of it.

However, this book is not aimed at Christian readers. David intends it to be read by non Christians.

If you are a Christian, read this book but give it away.

If you are not a Christian, it is a very good book to read with an open mind and willing to be challenged.
Read more
Report abuse

Charlie Lindsey
3.0 out of 5 stars Unhealthy Obsession, Magnificent Dénouement
Reviewed in the United Kingdom on 5 April 2016
Verified Purchase
In the introduction to his book Magnificent Obsession, author David Robertson claims the book is written to challenge the assumption that there is no or insufficient evidence to believe that the god of Christianity is actually real. What he has achieved however, is exactly the opposite, for this book demonstrates very clearly that there is no rational reason to take Christian claims seriously. Robertson has unintentionally written one of the strongest cases for atheism, and I have no hesitation in recommending this book to anyone who wants to understand the mind of the true believer.

Robertson's basic error is that he does not understand evidence. Instead, he lays out reasons why he believes the claims of Christianity, but he never explains why anyone else should consider them to be true, save for a brief and wholly unconvincing attempt to claim the bible as historical in chapter 1. Special pleading abounds, objective evidence is absent. Here, absence of evidence is indeed evidence for absence.

The strength of this book is that Robertson writes honestly. He is writing for what he thinks will be a sympathetic reader; a reader who is curious about Christianity, not prejudiced against it. What you won't find here is the hard shelled defences of the professional apologetic; there is no retreat here into the mystery of sophisticated theology, instead this is a heartfelt exposition of just why the author is obsessed by his faith. This is a shields-down call to share in his faith, not a shields-up defence of an irrational belief. Unfortunately for Robertson, in taking this approach he has unwittingly shown to any reader not pre-soaked in god belief, just how utterly vacuous and ridiculous Christianity really is.

Robertson fails to understand that it's possible to simply not share in his beliefs for entirely rational reasons. In Robertson’s world, you are either for Jesus, or against him. Unbelievers 'presuppose' there is no God, 'presuppose' there are no miracles. And it's only based on this presupposition that God is rejected. This tactic of misrepresenting atheism is something that Robertson is frequently guilty of, with objections to Robertson's case rarely examined honestly. This is a second damning fact that strips the claims of the book of any credibility.

By the time we arrive at the conclusion, Robertson freely admits that judging the evidence for Christianity is as much emotional as rational. This glaring admission of the irrationality of religious belief however does not dawn on Robertson. Instead he imagines that atheism has a similar emotional content, and I actually think he is sincere in this mistaken belief. He claims that the motto of the atheist is “There is no god and I hate him”. The absurdity of this statement is clearly lost on Robertson, such is his delusion that Christianity is true. I think the best way I could answer this would be to point out that God is your imaginary friend David, not mine! Or perhaps Robertson might ponder own his lack of anger towards, say, Thor, and then consider how relevant this ambivalence is to his disbelief? But the most damning claim of Robertson’s is that atheists ‘believe that no evidence for god can possibly exist’. Here we find out how Robertson rationalises to himself the awkward fact of unbelief in his own delusions. Well, I can’t speak on behalf of all atheists, but Robertson’s claims of what atheists believe don’t apply to me. Perhaps they only apply to the imaginary atheists who inhabit David’s mind?

Prior to the car crash of a conclusion, Robertson sets out to lay the case for belief in 10 chapters, written in the form of letters to an imaginary recipient, that will form a cumulative weight of overwhelming evidence. Originally planned as a rebuttal to Christopher Hitchens 'God is not great', Robertson must have quickly realised that Hitchens criticisms of religion hold water, and indeed we find Robertson agreeing with Hitchens more than once in the book. Instead Robertson sets out to defend his imaginary God, by writing to an imaginary, docile, recipient, one whom Robertson imagines is becoming more and more convinced as each helping of 'wee free' theology is administered.

But back in reality (and for those of us non-imaginary readers) as you read each chapter, and as evidence fails to materialise, as objections are glossed over or ignored, as atheism is misrepresented, you realise that Robertson has instead unwittingly created a magnificent denouement of Christianity, and exposed it as the mythology that actually it is.
Read more
Report abuse

M. F. Crowl
4.0 out of 5 stars Excellent book, but the production of the ebook isn't as good as it should be
Reviewed in the United States on 28 May 2018
Verified Purchase
Magnificent Obsession is framed as a series of letters to a person looking for answers in the faith scene, and focuses on dealing with the false ideology offered by atheists. Christopher Hitchens is his particular bête noire in this book, and Robertson puts many of that intellectual's false claims about Christianity in their place.
I like Robertson's humility - he doesn't claim to be on the same intellectual level as someone like Hitchens (though he's plainly no slouch in the brains department) - and I like the way he keeps coming back to the basics: Jesus Christ is the focus of the book. Everything else takes second place.
An atheist may not agree with his beliefs, but that's not to say that people haven't found Christ through Robertson's work online as his other book, The Dawkins Letters shows.
Well worth reading, whether you're a Christian already, or someone seeking to find the truth.
My only quibble was with the production of the ebook format: disappointingly, it's probably the worst I've come across. Italicized words are joined to whatever plain print word comes next, and the numbers connecting to footnotes are almost always a space away from the word they relate to, and joined to whatever is the next word in the sentence. On top of this are several typos
Read more
Report abuse
See all reviews
Back to top
Get to Know Us
Make Money with Us
Let Us Help You
And don't forget:
© 1996-2021, Amazon.com, Inc. or its affiliates