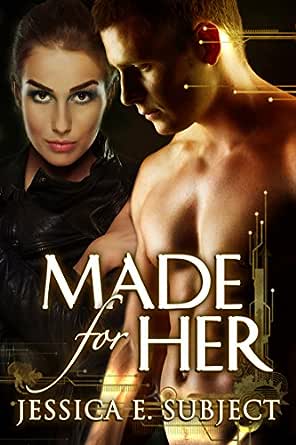 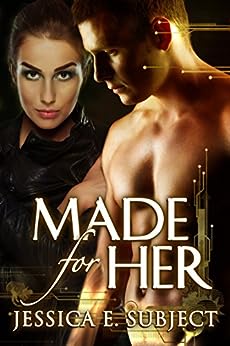 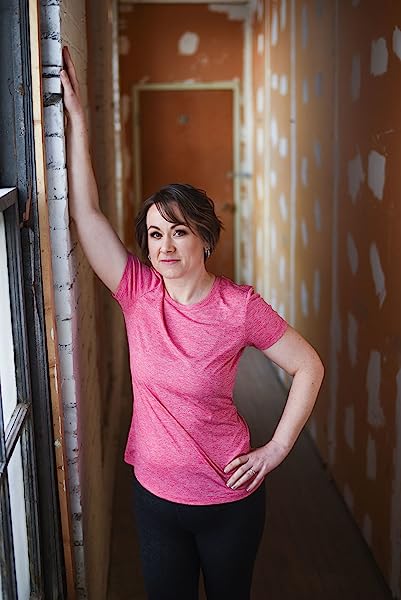 Made For Her Kindle Edition

The future has many possibilities and the author has called upon cloning and space travel to write her story. Makayla lost her husband who created cloning and years later is asked to train a set of clones, including one of her late husband. It's too much for her, yet she can't help but want to explore what he is asking for.
Fate knows she probably only sees her late husband, but he's fine with that. He just needs to show her that only in looks are they the same. it's wrong because he's a clone and he's lower rank. But he's willing to risk the consequences.

This novella is different than some of the ski-fi romances I've read. Cloning is hardly ever mentioned and I love that the author tapped in on this future possibility. Cloning and space travel are still new to us but she turned this into a romance of a different nature. Making clones that are the same in looks but different in everything else is intriguing. Having a clone to fall in love and a human reciprocate even more intriguing. Then throwing in a few twists gave this story a big impact with its shorter length. I liked the characters and story line and rooted for them even when odds were stacked against them. I'm looking forward to reading more from this author.
Read more
Report abuse

eBook Addict
3.0 out of 5 stars Scraped in 3 stars - short and it shows.
Reviewed in the United States on 21 January 2014
Verified Purchase
This was a bit of a different read, set in the not too distant future on Earth, and blurred the lines between science fiction and erotic romance. I think I'd have liked it a lot more if it was long enough to lend more credibility to the future setting. Somehow, despite the ability to create fully functioning clones, the general public are still living in houses that seemed no different to today and are heating lasagnes in microwaves in little roadside motels. That didn't sit quite right with me. I really felt that even induction cooking should have been a thing of the past if science had managed to breed sexy, bio-identical soldiers.

The whole things ends on a cliffhanger (after a neat little twist which was entertaining), but I wouldn't rush to read the next instalment. I just didn't feel there was enough development of the characters or the world they lived in to entice me to follow them on their future journey.
Read more
3 people found this helpful
Report abuse

CLM
5.0 out of 5 stars Made For Her is Made For Everyone
Reviewed in the United States on 1 March 2013
Verified Purchase
Made For Her is a Sci-fi romance novelette that begins with premise that cloning humans has become routine in our future. While created as superior humans, they are the property of the government and are mostly used to fight our wars. Denied the rights of citizenship, they are the slaves of the future, used and discarded with the certainty another can be made.

The normal humans hold them in contempt and call them slugs. But they love and dream just like the rest of humanity.
Captain Mikayla Jones is the Space Flight Training Center’s best instructor. For years, she’s trained clones to go faster and further into space. She has no problem teaching them and never refers to them ‘slugs.’ Daniel Jones, her deceased husband and a brilliant scientist, gave his life to creating clones.
Since his death ten years ago, she has remained dedicated to her job and her memories of Daniel.

Then the new squad of recruits arrive and one of them is a clone of her beloved husband.
Daniel32, aka, D32, aka Dare requested Mikayla as his instructor because she is the best. He’s devastated when Mikayla leaves upon sight of him and the squad is reassigned to a jerk who hates slugs.
Desperate, Dare goes to her home and pleads for her to train him.
He’s so like her husband, that falling in love with him is inevitable, but it’s still a delight to watch unfold.

I will refrain from telling you more because this is a story has a surprise you won’t guess and an ending you didn’t expect…at least I didn’t. However, I will say, it didn’t end as or perhaps I should say ‘where’ I expected. I wanted the story to continue and complete the task Dare was given.

Thus, I have demanded Jessica Subject to write a sequel to this novelette.
I cannot give this story a solid 5 since it left me wanting, but I will give it a 4.5 which I’ll round to a 5, because I loved the story for as long as it went. It’s original, well-written with characters you’ll love, or hate…depending on the character. It really surprised me with its final twist.

When you read it, and you definitely should, if you agree with me, write Jessica and let her know we want a sequel.
Read more
One person found this helpful
Report abuse

MRS
4.0 out of 5 stars Leaves you wanting more...
Reviewed in the United States on 10 August 2013
Verified Purchase
I'm a huge fan of the idea of cloning, and of Jessica's previous works in general. Being faced with a clone of your lost love sets up great potential for emotional and ethical conflict. There's also a brilliant plot twist that was a tear-jerker, and had me physically reeling - I really hadn't expected it. The ending will leave you reaching for a hanky and hoping for a sequel.

For me, this focused a little too much on the sex rather than the emotions behind it and the inner conflict of the main characters. For all his claim of wanting to be the best, Dare seemed more set on getting into Jones's panties, and for all her 'I shouldn't', she didn't put up as much resistance as I would expect. I felt it could have been deeper and been explored more. It wasn't as heart wrenching as some of her previous works, and I would have liked to know much more about this near future world, and the cloning process.

Fans of military-based scifi romances and erotica will enjoy this. For me it lacked some emotional depth, and I prefer my scifi more offworld, although I loved the cloning aspect and the big twist. While this particular story may have missed the mark for me a touch, I'm still a huge fan of J Subject's writing and will be back for more.
Read more
Report abuse

Tee Kay
5.0 out of 5 stars Great plot twist...
Reviewed in the United States on 22 April 2016
Verified Purchase
I loved the premise of this story. A Military trainer gets a new squad to train, and suddenly her deceased husband stands before her eyes, waiting to be trained to be the best. Her husband had been cloned, and she was expected to train him.

I think that the author did a wonderful job of writing the emotions as anyone in her position would feel them. I was thoroughly enjoying it, thought I knew how it would wrap up, and then, wham-mo! What a plot twist. Get ready for it.

There is explicit sex in the story. And the book is a fast read. That worked well for me because I didn't want to put it down once I started reading it.

Excellent writing. Well done, Ms Subject.
Read more
Report abuse
See all reviews
Get FREE delivery with Amazon Prime
Prime members enjoy FREE Delivery and exclusive access to movies, TV shows, music, Kindle e-books, Twitch Prime, and more.
> Get Started
Back to top
Get to Know Us
Make Money with Us
Let Us Help You
And don't forget:
© 1996-2020, Amazon.com, Inc. or its affiliates