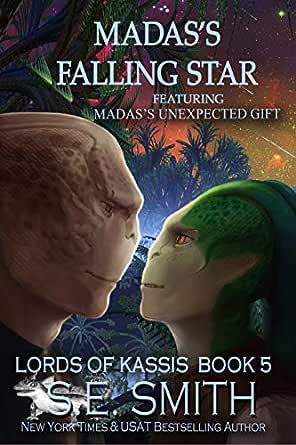 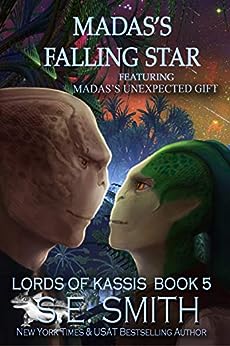 Can a small reptile from another world save the Princess he has adopted?

L’eon, a Chameleon Lightning Lizard, awakens to find that his planet was destroyed by an unidentified force. Trapped in an iron-ore prison hurtling through space, he is lost and alone until an unfamiliar planet’s gravitational pull draws him to its surface—and he is freed by an enchanting alien who he quickly adopts.

When a meteorite falls from the sky, Princess Madas Tralang rushes to claim the prized and potentially valuable space rock for herself. She is startled to discover an unusual creature huddled inside. Touched by the creature’s soulful eyes and unique features, she vows to protect the extraordinary reptile.

Madas is unaware that she has befriended one of the most ferocious and feared species in the known galaxies. After all, who would ever believe that something so cute could be so deadly? Perhaps, someone should have warned Madas’s unwelcome suitor about L’eon before he decided to try and claim her!

Prince Gril Tal Mod is destined to be the next Supreme Leader of the Tearnats—if he survives long enough to ascend to the throne.

Gril was supposed to be on a routine training exercise, but his flight goes horribly wrong when engine trouble forces him to land his fighter in a remote mountainous region. Once stranded on the ground, Gril discovers the malfunction was no accident—and he isn’t alone. He can sense someone watching him from the shadows.

Princess Madas Tralang’s curiosity always seems to get her into trouble. When Madas spies an unusual object streaking across the sky before crashing near her location, she believes it is a good omen. After all, she found her pet, L’eon, the last time an object fell from the sky.

Her hopes of finding something valuable are dashed when instead she sees a big, and rather ugly, Tearnat warrior. Though there is something about him…something magnetic, it’s his spaceship that she really wants. It is just what she has been searching for—a means to escape the dreary life expected of her!

The giant warrior pilot of the spaceship isn’t going to give it up easily, however, and Madas soon finds herself locked in a battle of wits and skill with the strange warrior, but they are not the only players on the field. Danger surrounds Madas and Gril—both from Madas’s clan and from the saboteur who is determined to see Gril dead. Can the Prince of the Tearnats and a small, but deadly alien pet, defeat their foes and save Madas before time runs out, or will Gril’s growing love for a curious Princess doom them both?

jamoz23
TOP 50 REVIEWER
5.0 out of 5 stars Loved having these two short stories together.
Reviewed in Australia on 26 March 2020
Format: Kindle Edition
Having been lucky enough to read both of these before, I loved having Ms Smith put them together in their own book.
MADAS’S UNEXPECTED GIFT
The short sweet story featuring L’eon I have read and loved before. Nice to have it here.
Madas follows a meteorite as it falls. Inside, she finds a sweet little lizard that she befriends, not knowing the special powers and characteristics of the species,
I love how L’eon decides Madas is his pet.
MADAS’S FALLING STAR was first in PETS IN SPACE 4.
We were given a short tease about these two in Star’s Storm. Loved, loved, loved getting the full love story of Madas and Gril, who were favourite characters of mine in the LORDS OF KASSIS series.
Madas is one hell of a strong character and a warrior woman. The way she bested Gril more than once and took him on a wild goose chase was entertaining.
Gril finds himself on a part of his homeworld he has never visited, the forests. He is so out of his depth but I loved how sweet he was to Madas.
L’eon is his amazing self and it was nice that Madas has one good brother that leaves with her.
I really wanted to know what punishment is metered out to Madas’ lying mother Tima and that excuse for a brother Geroff. Whatever they get would never be enough.
The ending 30 years in the future when they are on Kassis was perfect.

Amazon Customer
5.0 out of 5 stars Another amazing story
Reviewed in the United Kingdom on 26 March 2020
Format: Kindle EditionVerified Purchase
Ok this was one of the stories I was hoping to see. Mad as and Gril show up a few times in earlier books but when part of the story appeared in star"a storm I couldn't wait to hear more. I was not disappointed I loved Madas' quirky sense of humour and I'm looking forward to see if we get to hear more about Leon and his adventures with Madas. My rating for this book is because I personally think that this author deserves it. Yes I would recommend it because I haven't read a book that I haven't liked by this author but that is my personal opinion. If you want to read something that engages you, has a good storyline and humour then read it I don't think you'd be disappointed.
Read more
Helpful
Sending feedback...
Thank you for your feedback.
Sorry, we failed to record your vote. Please try again
Report abuse

denizen of Ballard
2.0 out of 5 stars Already in print, now pd 2x for same story
Reviewed in the United States on 27 March 2020
Format: Kindle EditionVerified Purchase
I liked the story just fine. Being offered "a new story" that turns out to be something I have already read is cheating. Yes, the into very short intro is new the rest I read some time ago. $5 down the tubes. I'm disappointed at the authors lack of integrity.
Read more
4 people found this helpful
Helpful
Sending feedback...
Thank you for your feedback.
Sorry, we failed to record your vote. Please try again
Report abuse

Many Hat Momma
4.0 out of 5 stars Madas and Gril's story! Awesome
Reviewed in the United States on 29 March 2020
Format: Kindle EditionVerified Purchase
In the Lords of Kassis series, you get a brief intro to the concerned and understanding Prince Gril Tal Mod, as well as his super secure, smart and compassionate mate Madas (and also their little unusual friend L'eon). Madas, the striking lizard lady (Tearnat), was the one character that stood out to me as I read through the series and I was so excited that she and Gril got their own book. It does not disappoint! Madas is awesome and her escapades with little L'eon are so fun. Not going to ruin the story for you here, but she and L'eon start leading Gril on a wild goose chase, and eventually they meet and lots of action packed chapters later, Gril and Madas are full on in love and mated. It's a good read, made me laugh, had surprising ups and downs, and generally made me happy when I read the last line. What more could you ask for? This book also includes "Madas's Unexpected Gift," the short story of how L'eon and Madas found each other, which is sweet and provides great background for "Madas's Falling Star."
Read more
One person found this helpful
Helpful
Sending feedback...
Thank you for your feedback.
Sorry, we failed to record your vote. Please try again
Report abuse

Johanna O'brien
5.0 out of 5 stars Absolutely wonderful!
Reviewed in the United States on 26 March 2020
Format: Kindle EditionVerified Purchase
I think I have a new favorite S.E. Smith book! Madas and Gril's story was fabulous. Just enough romance, adventure and humor to keep you reading every single word. Loved this whole series but this one and River's are my favorites. Thank you so much for giving me something to take my mind off the troubling times.
Read more
Helpful
Sending feedback...
Thank you for your feedback.
Sorry, we failed to record your vote. Please try again
Report abuse

Kindle Customer
5.0 out of 5 stars Wonderful tale of love, passion and a chamelon
Reviewed in the United States on 28 March 2020
Format: Kindle EditionVerified Purchase
This story is a winner. Characters that are relatable, passion and plenty of action. I can't wait for more books from this universe.
Read more
Helpful
Sending feedback...
Thank you for your feedback.
Sorry, we failed to record your vote. Please try again
Report abuse
Load more international reviews

Janurova Dana
5.0 out of 5 stars This one is so sweet
Reviewed in the United States on 30 March 2020
Format: Kindle EditionVerified Purchase
I loved everything about this book! Both the heroine and the hero are very strong characters. The "pet" lizard is absolutely adorable. I wish the author would write one more adventure story with them!
Read more
Helpful
Sending feedback...
Thank you for your feedback.
Sorry, we failed to record your vote. Please try again
Report abuse