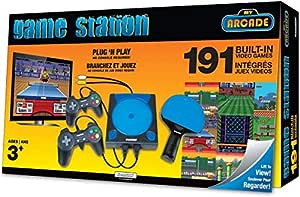 by dreamGEAR
Platform : Not Machine Specific
2.9 out of 5 stars 31 ratings
In stock.
International product from outside Australia
Ships from and sold by Amazon US.

RetroGrafx
2.0 out of 5 stars Homebrew clone makeover
1 July 2015 - Published on Amazon.com
Verified Purchase
Just got mine today... put some batteries in and turned it on.. so far it works as advertised. I only tried brief play of the first 10 games, 2 of the first 10 I tried are just ok. there is 191 games listed, and there look to be a few that are copies or different levels of the same game but under another name. there are NO big name games to be recognized, these all appear to be homebrew games. This is not an issue if you have young kids who won't notice it anyway.

The controllers are ok, Quality and design is not good. buttons are for the most part are responsive, though the directional buttons need to be pressed really hard. the wireless paddle is terrible, there is no consistency with it, and rarely registers your movements, making those games unplayable, thankfully there are not very many paddle games.

The console itself is very similar to another all in one clone, the (Game Fillip) although with dreamGEAR 191 the power supply is different, dreamGEAR has only battery powered option and Game Fillip has both battery or outlet. Though the dream gear has a built in AV cable.

So if you want to try new homebrew style games this is for you, if you want to play games you may know and remember, try the Game Fillip. Both systems have some quality issues, but if your using it to keep some kids busy, it just (might) work for you.

Update 7/12/2015;
one controller starting going haywire, buttons being pushed when the controller wasn't even being used, looked closer at controller and found a hole next to the wire. this renders one controller useless, the other still works, but the buttons require pushing them really hard. as a result of poor game design and poor hardware design I am downgrading it to 2 stars.. a look closer at all the 191 games, found only about ten (10) that were playable or enjoy, the rest are not good. dreamgear needs to take a closer look at the games they put on their machines, they keep getting it wrong. if I were you go with something from ATGAMES they are reliable and have games you recognize.
Read more
8 people found this helpful

Tiana P
2.0 out of 5 stars Very basic and amateur
29 December 2018 - Published on Amazon.com
Verified Purchase
There are some two players games but not in the true sense that you are playing against someone else. One person goes, then the other. There is also no way to back out of a game and go back to the menu of games, you have to hit the reset button every time. And every game, all 191 of them, is listed in print. No pictures or anything to give you an idea of what it could even be like. We didn't care that it wasn't big name games or anything really recognizable, but I bought this for my 4 year old to have his own "gaming system" and it requires so much to even play that it is not enjoyable for him. And the worst part is it is entirely battery run. I incorrectly assumed it had a battery "option" for travel but would still have an traditional adapter. It does not. Save your money and just buy the old school Sega's or Nintendo's that have come back out, they'd be a better value.
Read more

val
1.0 out of 5 stars Pure junk
13 June 2019 - Published on Amazon.com
Verified Purchase
Very cheaply made, very thin plastic, just so old and outdated LOL...my kids looked at this game tired playing it, after picking up the controllers they threw it on the floor and proceed back to their Xbox. I was just trying something different for my babies. Don’t waste your money. Picture quality it very horrible as well!!!
Read more

Marissa Harvey
5.0 out of 5 stars Perfect
10 January 2019 - Published on Amazon.com
Verified Purchase
Arrived last
Read more
Go to Amazon.com to see all 31 reviews 2.9 out of 5 stars