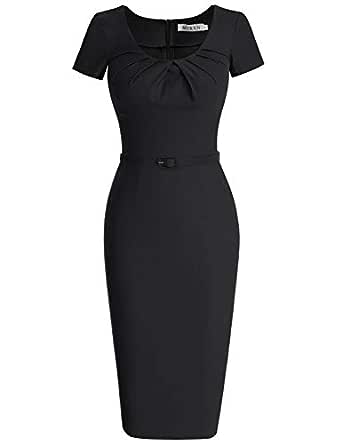 NOTE:
- This Size Information Is Just For Reference Only.
- Please allow 1-2cm (0.4-0.8") differences due to manual measurement.

Tiger
4.0 out of 5 stars Nice cut but very stretchy
Reviewed in Australia on 23 December 2018
Size: MediumColour: BlueVerified Purchase
Very nice and elegant dress, comfortable to wear but on the large side. Should have gone to small instead of medium.
Read more
Helpful
Comment Report abuse

Amazon Customer
5.0 out of 5 stars Perfect
Reviewed in Australia on 31 May 2018
Size: X-LargeColour: PeachVerified Purchase
I love the fit and the material is soft.
Read more
Helpful
Comment Report abuse
See all reviews from Australia

CC Made This
5.0 out of 5 stars I bought this dress to wear to an outside fall ...
Reviewed in the United States on 8 November 2016
Verified Purchase
I bought this dress to wear to an outside fall wedding. I bought the purple (XL) and wine (L) colored dress. I got 2 sizes because of other reviews that said the dress ran small and some said the dress ran large. The large fits just right. The XL was bigger in the top but still fits to my liking. The belt was a pain, only because it has nothing to latch on to, so I'll get some Velcro and put on it the next time I wear it. For comparison my info is: 5'11, 188 lbs, and my measurements are 34-28-46... I'm very "hippy" and carry most of my weight in my butt and thighs. Hope this all helps!
Read more

Lovely Lady Locs
5.0 out of 5 stars FABULOUS
Reviewed in the United States on 18 May 2017
Verified Purchase
Buy the dress. Don't waste your time wondering. The picture does not do it justice. I bought this dress for my nursing school graduation......FABULOUS!!!!
Read more

Holly Jackson
5.0 out of 5 stars Perfect for work
Reviewed in the United States on 18 June 2017
Verified Purchase
Absolutely beautiful and perfect for work. I purchased the gray color. I'm 5'6" and it falls at a lovely spot right below the knee. It shows my curves and the top accentuates my chest very well. The belt is definitely on the cheaper side, but the gray on gray looks great. I'm extremely satisfied with this purchase. For ref: 130lbs, 5'6", 34DD, ordered medium
Read more

She loves to shop
5.0 out of 5 stars Cute, comfortable, and flattering
Reviewed in the United States on 8 October 2016
Verified Purchase
This dress is flattering and very comfortable. I ordered the XL (my measurements are 39"33"39") and it fits great, not too tight, not too loose. At 5'5.5" this dress hits me 2" below my knee. The pics are right out of the bag, so the dress will need some ironing before wear. Material is stretchy. Once you have sized the belt around your waist, there is no loop to slide the excess through to keep it in place. I used some Velcro stickers on the belt to keep the excess from flopping out/down and keep it laying flat which worked perfectly. The belt has no real buckle, it's only a faux buckle (no metal hardware to hook through) which is something I hadn't realized (no biggie). Measure yourself and buy according to the supplied size specs. I love this dress and look forward to wearing it!
Read more

Amazon Customer
2.0 out of 5 stars Not made for shorties like me!
Reviewed in the United States on 18 October 2016
Verified Purchase
This dress looks cute online but it is super long when you put in on! I am 5'2" and it looks weird on me. Might look better if you have long legs.
Read more

The G Spot
4.0 out of 5 stars Stylish, snug-fitting dress with cute belt ... and no belt loops
Reviewed in the United States on 7 December 2019
Verified Purchase
For lack of belt loops, this very stylish dress with a cute belt manages to drop from being a 5-star total winner to being a 4-star what-might-have-been. I bought this dress for my wife in dark green and gray. The lack of belt loops was maddening to me, and I wasn't even wearing the dress, just trying to photograph her wearing it. The belt should be riding a horizontal seam that circles the dress, but the lack of belt loops basically makes this goal impossible if you actually want to move in the dress and not wear the belt too tight. The weight of the buckle causes the front of the belt to droop and the rear of the belt to ride high above that horizontal seam. Maybe this isn't horrible, but it's ridiculous that the manufacturer managed to omit a loop of thread at each side that could have kept the belt in place at all times.

Can the belt loops be added later? Sure, but then you have to find thread to match the fabric and do the sewing yourself, and frankly we didn't sign up for that. I didn't buy this dress for my wife to assign her some work, and I don't sew, and I also didn't sign up for two trips to the alterations shop to fix such an obvious omission.

Also, this dress fits my wife too tightly across the hips, which causes a horizontal fold to appear across the front about six inches below the belt. My wife says that this is the dress riding up and that this issue can be resolved by wearing a slip. Maybe that's true, but having watched my wife try on a dozen work dresses I bought her recently, I'll say that this dress has more of a tendency to ride up / show that horizontal fold than the others.

Large otherwise fits my wife well, so I don't want to upsize the entire dress. She's 5'7", 150 lbs, 40-29-40, 36DD. She really does like this dress quite a lot, in both colors. I do as well, when I'm not distracted by the belt droop or the horizontal fold or the creases in need of an iron, all of which I tried to minimize in the photos. I do like that this is a figure-hugging dress that works well professionally, showing a bit of my wife's great figure without being overly sexual in a professional environment. So, that's all great. The lack of belt loops ... not so great.

Finally, what kind of name is MUXXN? I get that the Chinese now make all of our clothes and make dresses like these very affordable, but is it too much to ask that they come up with non-random arrangements of the Latin alphabet for their brands? And yes, this does matter, because putting on a dress tagged "MUXXN" made my wife cringe. A brand should be aspirational and, at very minimum, pronounceable.

Diana
3.0 out of 5 stars Lovely but...
Reviewed in the United States on 4 February 2017
Verified Purchase
UPDATE:
Didn't even wear it often and the elastic in the fabric is now sticking out all along both sides of the dres. See picture.

Original review:
This looks absolutely lovely. One problem is the belt that came with it can't be small enough for small waists. It's still loose even if I tighten it to its max.

Coolchick777
5.0 out of 5 stars fits perfectly; great for curvy women
Reviewed in the United States on 12 December 2017
Verified Purchase
Everything about this dress is a win. This is my third dress purchase from this manufacturer and I'm alway so pleased by the fit. The dress is easy to wear, no worrying about it scooting up over my thighs (I'm thick-fit, 36-31-43, 183 lbs, 5'5", lots of muscle), My waist is accentuated perfectly and my hips and butt look smashing. I wore spanx, though I really didn't need to as the material is thick and textured enough that you don't see any bumps in the road. I will keep buying this brand. I would likely buy this dress again in a black. I think with a suit jacket I can easily make this into corporate presentation worthy. This brand and this dress are worth the money. I ordered a size large which seems to always work with my hour glass shape. I've ordered XL before in this brand and it's always too loose in just about every way.
Read more

Helena Miller
5.0 out of 5 stars Just beautiful
Reviewed in the United States on 7 December 2016
Verified Purchase
This dress is beautiful!! I have recently lost about 40 pounds and wasn't sure if the xl would be too small. I'm about 190 and 5'3". It fits like a glove and hugs all my curves. The material is a mixture of cotton, rayon and spandex, so it moves with you. I'm very satisfied with my purchase!
Read more

J. Jessica
5.0 out of 5 stars Love this dress!
Reviewed in the United States on 21 December 2016
Verified Purchase
This is a great dress made out of nice soft stretchy material that seems like pretty good quality. I originally ordered the medium from what the size chart said and it fit but not snug enough so I reordered the small and am very pleased! I also picked up some tummy taming underwear so I wouldn't feel like I had to suck it in all night and wore a padded bra for more bust. I am 5'4" 110lbs and a 34c bra. Hope this helps!
Read more

Anita Marie
5.0 out of 5 stars Feminine and form fitting
Reviewed in the United States on 10 December 2017
Verified Purchase
The dress fit well. It hit below my knees. It gives a flattering look for many shapes. I wear a size 14-16 and bout an XL. I would buy the dress in more colors.
Read more

jnd123
5.0 out of 5 stars Wonderful!
Reviewed in the United States on 7 May 2017
Verified Purchase
This dress is a gem! I received a ton of compliments the first time I wore it. I added shapewear underneath for smoothing but the dress is fairly stretchy and conforms to the body very well. Good movement, the belt stayed in place, and easy to dress up. I'm 5'6, 140 lbs, and 36D. The medium fit very well.
Read more

See all reviews from Australia