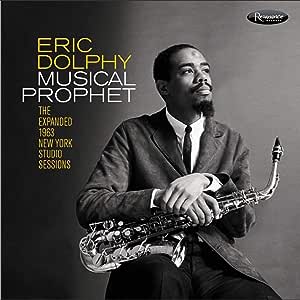 4.7 out of 5 stars
4.7 out of 5
111 global ratings
How are ratings calculated?
To calculate the overall star rating and percentage breakdown by star, we don’t use a simple average. Instead, our system considers things like how recent a review is and if the reviewer bought the item on Amazon. It also analyses reviews to verify trustworthiness.

Richard Leigh
5.0 out of 5 stars Essence of Dolphy
Reviewed in the United Kingdom on 28 January 2019
Verified Purchase
There were only two occasions, as far as I know, when Dolphy had the chance to make studio recordings with plenty of rehearsal time: the Blue Note session resulting in "Out to Lunch", and the Douglas sessions released here. His other records under his own name were earlier, on Prestige. They're great, but less varied in approach. Anyone familiar with Dolphy's music but who hasn't heard this set, is in for a pretty overwhelming experience. Even if you own the original records, "Iron Man" and "Conversations", this set is indispensable. There is almost half an hour of previously unissued duets between Dolphy (on bass clarinet) and Richard Davis' beautiful arco playing on bass. There are two more takes of Dolphy's solo alto "Love Me", and there are five unissued tracks of the larger groups. A few of these were bootlegged on a Japanese CD some time ago; but finding a copy was almost impossible. The sound on this reissue is, as others have said, a great improvement on previous issues. The decision to issue only a selection from the new material is understandable - if frustrating to a completist like me. The notes refer to several hours of music, and of course I'd like to hear all of it. But marketing considerations apply, and what we've got is brilliant.

It's fascinating to hear, for example, how the solo alto piece evolved. The first take seems to end mid-phrase, as if Dolphy hadn't considered how to finish. Until then, of course, his playing is great. The second take ends more decisively, but there are a couple of glitches while Dolphy is playing high notes and, I suspect, he decided that he could do even better. The third take, which is the one originally issued, kicks off with a quotation from the opening of the slow movement of Debussy's Violin Sonata, and this seems to impel Dolphy through a solo which has no hesitations and is, simply, a masterpiece. It's odd that this opening is used only on the issued take: maybe he recorded it on the following day, after reconsidering. The original tune, incidentally, isn't played straight at all: Dolphy plays fragments of it, linked by his own cadenzas. The estate of the original composers are lucky to have been paid.
My only gripe - an extremely slight one - concerns the packaging. Try getting the booklet back into its slot. Also, it would have been better of the CDs had inner sleeves. The texts about the discovery of the tapes, the circumstances of the recording, and the story of the original producer Alan Douglas, are informative. But I'd have appreciated information about what remains unissued (there's another take of "Mandrake" accessible on the internet, for example), and I'm curious as to the circumstances in which pianist Roland Hanna, who had no connection with these recordings, came to write a tune ("Muses") for Richard Davis. In place of such detail, we get several musicians telling us what we knew already: that Eric Dolphy was a great musician and all-round nice guy.
Buy this set, for the good of your soul, and because if enough people buy it, we might even get more of the same. Let us pray....

Btw ~ While the music is superb the CD packaging is poorly designed.
The CDs and 96-page booklet are a struggle to remove from and replace in their sleeves.
I can see the whole flimsy cardboard package falling apart before too long.
Read more
16 people found this helpful
Report abuse

This triple CD is one of last year's stunning re-issues! The sound is superb and is presented the way it was recorded and meant to be heard - in MONO. The music is top rank Dolphy.

The cardboard package is triple gate-fold and comes with a 100 page book.

Of the three CDs, one is a disc of previously un-issued official studio recordings, the other two previously released albums both include a substantial amount of additional material. All music is in mono, and that aspect surprisingly enhances the whole listening experience.

The only negative is the lovely packaging is not really fit for purpose! The CDs are housed in cardboard inserts/slots, with the opening on the left side, and the book is difficult to remove and impossible to put back in place once removed, so if you care more than the designers of the package about practicalities of usage it's time for a do it yourself job with storing the discs and book elsewhere!

*I have a copy of Iron Man (stereo) and believe me this Mono version sounds so much better, plus it has a 15 odd minute additional extra track tagged on at the end.
Read more
4 people found this helpful
Report abuse

CS100
5.0 out of 5 stars Ferocious
Reviewed in the United Kingdom on 27 March 2019
Verified Purchase
Okay, it's in mono, but the sound quality is really good throughout. In the extensive booklet, the compilers explain how, rather than include everything, they chose the best additional takes for extras, and does it show - There is nothing here that you will not want to listen to again & again. The only bad thing is the packaging is designed in such a way that it is very difficult to extract the third CD. However, it would be churlish to deduct a star when the quality of the music is so good.
Read more
6 people found this helpful
Report abuse

J. Lamede
5.0 out of 5 stars Brilliant!
Reviewed in the United Kingdom on 13 April 2019
Verified Purchase
This is a marvellous release of utterly gripping music by Eric Dolphy. Only some of these recordings have been available before, and this is a superbly remastered issue. The only blot is in the packaging: an over-tight cardboard multi-sleeve which tends to split when you extract the discs. There's an excellent, detailed booklet, but getting it out of its skin-tight sleeve is a major enterprise every time you want to look at it. Still, the music itself deserves more than five stars.
Read more
Report abuse
See all reviews
Get FREE delivery with Amazon Prime
Prime members enjoy FREE Delivery and exclusive access to movies, TV shows, music, Kindle e-books, Twitch Prime, and more.
> Get Started
Back to top
Get to Know Us
Make Money with Us
Let Us Help You
And don't forget:
© 1996-2020, Amazon.com, Inc. or its affiliates