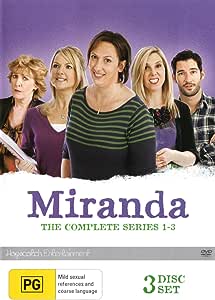 Brimming with warmth and featuring the best of British comedy talent, Miranda tracks the hysterical and unpredictable journey of a character you can't help but fall in love with. Miranda has always stood out from the crowd. She's over six foot tall, lacks any kind of grace and has an odd habit of dancing in inappropriate situations. She lives in her own chaotic world, making a living by owning a joke shop which is managed by her best friend and taskmaster Stevie (Sarah Hadland). She tries desperately to fit in with her old boarding school friends (Sally Phillips) who still refer to her as ‘Queen Kong' and seem more concerned with their BlackBerries and upcoming weddings than with Miranda's feelings. Her mother Penny (Patricia Hodge) is on a mission to get Miranda married, but a boarding school upbringing means Miranda is hopeless around men and her flirting skills leave a lot to be desired. When her old university pal Gary (Tom Ellis) becomes the chef at the restaurant next door, Miranda embarks on all kinds of hapless attempts to spark a ‘romantic moment'.

4.7 out of 5 stars
4.7 out of 5
659 global ratings
How are ratings calculated?
To calculate the overall star rating and percentage breakdown by star, we don’t use a simple average. Instead, our system considers things like how recent a review is and if the reviewer bought the item on Amazon. It also analyses reviews to verify trustworthiness.

lynne spry
5.0 out of 5 stars Very funny and well acted without any profanies!
Reviewed in Australia on 28 December 2020
Verified Purchase
Miranda Hart is a past master of the art of comedy with a live audience. I have been watching ‘bits and pieces’ of this show on Utube and wanted to see the three series in order and in its entirety! I am still waiting for The Finale which I am looking forward to with great anticipation. Well done to Miranda and the rest of the cast. Is there a DVD of all the hilarious out takes?
Many thanks, Lynne Spry.

D J F
5.0 out of 5 stars Such fun!
Reviewed in the United Kingdom on 10 August 2019
Verified Purchase
All three series of Miranda, though missing the belated two episode finale. Starring Miranda Hart as the socially awkward lummox Miranda, part of the joy of this series is the continual breaking of the fourth wall as Miranda confides her real thoughts directly to the audience. Like a big child who has never grown up Miranda has a love-hate relationship with her as I call it mother Penny who is forever trying to fob Miranda off on whatever man would have her - such fun! Miranda runs a joke and novelty shop with store assistant manager and best friend Stevie, wonderfully portrayed by Sarah Hadland and their childish brinkmanship is a joy to behold, particularly when they resort to name calling which often quickly disintegrates to trading insults about their physical characteristics. Stevie is Miranda's childhood friend and the sort of shorthand language they use establishes this long-standing relationship well. Stevie is often just as half-soaked as Miranda, prone to the same level of silliness at times and the interface between these two characters is beautifully portrayed. The supporting characters too are all strongly written, with Miranda's lust for next door restaurant owner Gary and exasperation at posh friend Tilly, who still uses public school rhetoric as well as the always amusing 'bear with' catch phrase whenever distracted by her mobile phone.

I like that this is eminently silly, often exaggerated and always strongly written. Laughs come often, usually at Miranda's expense. What is also clear is that Hart is a fabulous physical comedian, using her stature to excellent effect. This is a character that in some ways refuses to grow up but in others is desperate to and that dichotomy is one of the strengths of the writing. Miranda often finds herself in quite bizarre situations, and her frequent awkwardness as she tries to squirm her way out of yet another tight fix, wrapping herself in ever tighter knots is always a joy. One can suspect that some of this is an only slightly exaggerated version of Hart's real personality, so naturally does she portray the social awkwardness. This is a traditional British sitcom, there's nothing hugely groundbreaking here except the sheer excellence of it's cast and writing and the continued breach of the fourth wall which has since become a staple of the very different "Mrs Brown's Boys" and "Fleabag". Definitely on of the best the BBC has produced in the 21st Century.

Janna Wong Healy
5.0 out of 5 stars THE BEST SHOW EVER!
Reviewed in the United Kingdom on 16 October 2017
Verified Purchase
As an American, I discovered Miranda Hart as a guest on the Graham Norton Show. Her humor is self-deprecating and quite hysterical. So, I kept waiting and waiting for her show to come to the U.S. When it didn't, I bought this DVD and I watched every episode multiple times because it's just so darn funny, I love the fact that she breaks the "fourth wall" and talks to the audience. I love her interactions with her mother. And I especially love her relationship with Gary. It's a wonderful comedy -- funny but also poignant and warm-hearted.
Read more
2 people found this helpful
Report abuse

J. McMaster
3.0 out of 5 stars Started off hilariously funny
Reviewed in the United Kingdom on 13 May 2017
Verified Purchase
The first series is hilarious, the second was funny and the third was quick coarse actually and definitely not as funny as before. It seems to be one of those TV shows that goes downhill as it goes. Still, there were a few laughs in the last season. It's worth a watch anyway.
Read more
One person found this helpful
Report abuse

miss kitty
5.0 out of 5 stars WHAT HAVE YOU DONE TODAY TO MAKE YOU FEEL PROUD? I WATCHED MIRANDA
Reviewed in the United Kingdom on 20 November 2014
Verified Purchase
Miranda hart I love you I spent a week going through this laugh out loud box set I never laughed so much in ages such fun! I love the Miranda Gary storyline I hear there's only going to be two Christmas specials and that's the end of the show Noooooo but some shows do tend end at the 3rd series Little Britain being one. All good things come to a end I guess even at least I can relive it all on DVD. Also this box set is a great price many supermarkets selling for a few quid more get the best offer on Amazon and get laughing.
Read more
One person found this helpful
Report abuse

Minniti Giulietta
5.0 out of 5 stars Wonderfully fey and surreal
Reviewed in the United Kingdom on 1 February 2020
Verified Purchase
Had already watched the series -or more exactly what was availabele on the internet.
Liked it so much I had to have a complete copy to cherish and return to when ever I got hit by the blues.