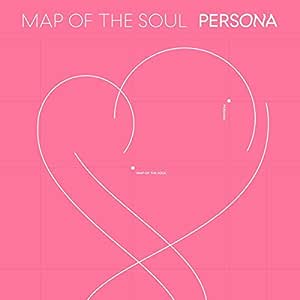 The album will mark a new chapter for the group, their first release since they completed their Love Yourself album trilogy last summer after topping the Billboard 200 twice, first with May’s Love Yourself: Tear and then again with August’s Love Yourself: Answer.

The title of the album was previously hinted to during an introductory video fronting the group's performance at the 2018 Mnet Asian Music Awards (MAMA) in Hong Kong.

Map of the Soul: Persona will be released ahead of the group’s upcoming Love Yourself: Speak Yourself world tour, which will take the act to stadiums throughout North and South Americas, Europe, and Asia.

Each of the shows in Europe and the U.S. sold-out, including two dates at London’s iconic Wembley Stadium.

Please note: stock will be random as to which version of the artwork customer receives.

Map Of The Soul: PERSONA

All US sales will count towards the USA SoundScan and Billboard charts, as well as the Korean Gaon charts.

Zara
5.0 out of 5 stars WOW
6 August 2019
Format: Audio CDVerified Purchase
I'm super impressed by this new comeback, and could not be happier with my album! Amazon packaged it perfectly and securely, there was no damage at all to the case or photobook. I received version 1, which was the one I really wanted, and it also came with a photocard, postcard, and film strip, which surprised me (My Love Yourself:Answer album only had one photocard.) The cd ran without problem and sounded very clear; I find the cd's sound a lot better than what you get off streaming the music. Overall, just a great album and great job by Amazon. :)
Read more
Helpful
Comment Report abuse

Oppa696969
5.0 out of 5 stars No damage made to the album
20 May 2019
Format: Audio CDVerified Purchase
It was beautiful, the outside of the album didn’t have a single scratch or tiny dent. And it arrived the next day when it was supposed to come in a week. Really impressed with the item.
Read more
Helpful
Comment Report abuse

meon_
5.0 out of 5 stars Super fast shipping !
13 August 2019
Format: Audio CDVerified Purchase
I was really happy with how quickly the album arrived as I needed it for a gift for a friend. She was really pleased with the present. Everything was in the album as expected - highly recommend.
Read more
Helpful
Comment Report abuse

Kim
5.0 out of 5 stars ITS REAL👍
11 June 2019
Format: Audio CDVerified Purchase
Amazing!
Love it, came with everything.
It's also the real deal which is great
I definitely recommend

Emilia
5.0 out of 5 stars Amazing
23 September 2019
Format: Audio CDVerified Purchase
I bought this for a friend of mine and it came quicker then I expected and in great quality!
Read more
Helpful
Comment Report abuse

Tessa Frost
5.0 out of 5 stars Great album
26 May 2019
Format: Audio CDVerified Purchase
I was very happy with this album. I got the Yoongi photocard
Read more
Helpful
Comment Report abuse
See all 7 customer reviews
Write a customer review