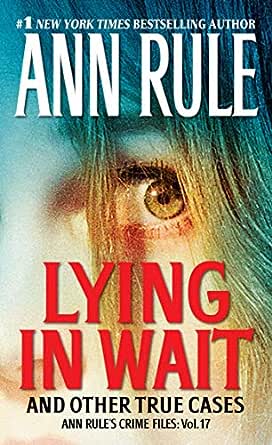 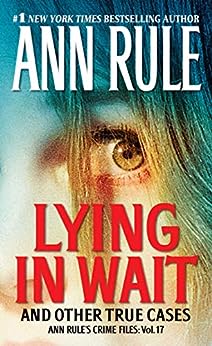 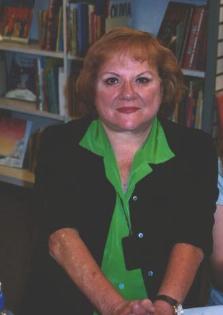 In this gripping collection of investigative accounts from her private archives, “America’s best true-crime writer” (Kirkus Reviews) exposes the most frightening aspect of the murderous mind: the waiting game. Trusted family members or strangers, these cold-blooded killers select their unsuspecting prey, wait for the perfect moment to strike, then turn normality into homicidal mayhem in a matter of moments. Ann Rule will have you seeing the people and places around you with heightened caution as you read these shattering cases, including:

• New mothers murdered, their infants kidnapped, in an atrocious baby-selling scheme
• The man who kept his criminal past hidden from his wife—and his wife from his mistress—until he coldly disposed of one of them
• The beautiful daughter of a State Department official ran away from the privileged world she knew and hitched a ride with a man she didn’t . . . with fatal consequences
• For months, a vicious, rage-filled serial rapist eluded police and terrorized Seattle’s women—when would he strike next, and how far would his violence escalate?
• A criminal known for his Houdini-like escapes is serving time for murder in a botched robbery—now the convict is being served dinner in a civilian’s home, where he has one more trick up his sleeve
• A long-lost relative who came home to visit, leaving a bloody trail through Washington and Oregon; no one realized how dangerous he and his ladylove were—until it was far too late. . . .

With her ability to translate the most complex cases into storytelling “as dramatic and chilling as a bedroom window shattering at night” (The New York Times), Rule expertly analyzes the thoughts and deeds of the
sociopath, in this seventeenth essential Crime Files volume.

Ann Rule wrote thirty-five New York Times bestsellers, all of them still in print. Her first bestseller was The Stranger Beside Me, about her personal relationship with infamous serial killer Ted Bundy. A former Seattle police officer, she used her firsthand expertise in all her books. For more than three decades, she was a powerful advocate for victims of violent crime. She lived near Seattle and died in 2015.

Paul
5.0 out of 5 stars Fantastic read.
17 January 2015
Format: Kindle EditionVerified Purchase
Ann Rule is the doyen of true crime writers and here's another reason why she is so admired by her Australian fans.
Read more
One person found this helpful
Helpful
Comment Report abuse
See all 2 customer reviews
Write a customer review

william sullivan
5.0 out of 5 stars As usual a well written look into the machinations of violent crimes
17 September 2018 - Published on Amazon.com
Format: Kindle EditionVerified Purchase
Ms. Rules books are always highly detailed and well written, no doubt a result of meticulous research and her contacts with local law enforcement. After reading several of her novels and shorter stories, many share a sickening commonality. That being the pattern in our failed criminal justice system that all too often plays "catch and release" with the most violent criminals.

Time after time it is shown that violent offenders are caught, imprisoned and then paroled, even after attempting murder while locked up. If that doesn't tell you law makers could not give a damn about the people they are sworn to protect, nothing will.
Read more
3 people found this helpful

Mary
3.0 out of 5 stars Good, but...
30 November 2014 - Published on Amazon.com
Format: Kindle EditionVerified Purchase
I usually love Ann Rule books. She was one of the first true crime authors I read, and she remained my favorite for many years. But this latest offering feels rushed and incomplete, almost as if Ann herself is tired of writing the books and is still doing it solely because it's her job. None of the stories contains the kind of detail I have come to expect in an Ann Rule account, and as a result I didn't much care about the people involved. When I become blasé about a crime victim, I know it's time to quit reading.
So I give this book three stars, because it IS Ann Rule, after all, and there are no glaring flaws, other than the rushed, "catch it in a sound bite" nature of the stories. Just don't let this be the book by which you judge Ann Rule's talent.
Read more
56 people found this helpful

katrig
4.0 out of 5 stars Classic Ann Rule Case File Book
28 December 2014 - Published on Amazon.com
Format: Kindle EditionVerified Purchase
I am a true Ann Rule fan and have read every book Ann has published. I do not enjoy the case file books as well as Ann’s full length books but that is my personal choice. I am always amazed at what some people will do, to get their kicks and this book is no exception
THE 1st case the BABYSELLER: Three decades ago, Jackie Schut was considered one of the most prolific “baby sellers” in the country. She traveled all over the US, murdered women who had just had babies, and then stole their babies to sell on the black market with her husband Harold who was also a pedophile.
Geneva Clemons thought her newborn son, James, was adorable. What mother doesn’t? It did not seem farfetched when a roving photographer in January 1980 told Geneva that James had been nominated for a national magazine’s Most Beautiful Baby contest. Jackie, shot photos of James, and then returned the next day and asked Clemons and the baby to accompany her to nearby Decatur to receive a savings bond prize.
Geneva met Jackie the next day. Jackie responded by drawing a .38. In Geneva front yard She seized her baby and fired two deadly shots at Geneva. The murder was witnessed by Geneva’s daughters, ages 5 and 7, who wailed as the photographer’s car peeled away with their baby brother inside. Two hours later, James was found unharmed — abandoned on a country road.
Five weeks later, a sailor’s wife named Cheryl Jones, 23, was approached in the Navy commissary in the Algiers section of New Orleans by a stout woman who said she was scouting babies for a magazine contest. Cheryl got in the car with Jackie and her husband Harold. They checked into a nice hotel in uptown Houston. The next morning, a maid found the young mother’s body. One wrist was slashed, and she had overdosed on barbiturates. She left a suicide note: “My life is ruined. I left my husband for another man and now I have nothing.” Her killers were gone — and so were baby Amanda.
Jackie and Harold carried on hurting children until they were caught. Harold molested Jackies own children and they took children to sell them on in the black market for $2000. This was just the first story in Anne Rules case files out of 6
The next 5 cases are shorter starting with a Robert Baker who killed his wife Kathie Hill with a hammer while she was sleeping so he could go off and marry another woman.
This case is sad as it concerns the horrific murders of the happily married couple Rod Pedersen and his wife DeeDee by Joey Pedersen who was Rod’s son from a previous marriage and his girlfriend Holly Grigsby. DeeDee is the innocent wife who had no idea the husband she would marry had a secret passed life and a son who would destroy her life.
The next case concerns the life and times of a serial rapist by the name of Michael Smith. He was eventually caught and given a lengthy prison sentence.

The last case concerns the exploits of Arthur St. Peter who had a life history of armed robbery and other felonies and who eventually shot two married people.
If you love Ann Rule like I do then you will enjoy reading this book. Just remember there are a lot of sick people out there who without Ann rule investigative journalism we would never know about.
Read more
5 people found this helpful

Eddie Wannabee
4.0 out of 5 stars Veteran of the genre
14 December 2014 - Published on Amazon.com
Verified Purchase
Ann Rule is a veteran of the genre. I have read many of her books, some have been very good, others not so great, but with her latest offering, Lying in Wait: Ann Rule's Crime Files, Vol 17, I found the stories well written, and for some reason I kind of like Ann Rule more after reading it. In the early pages she says that if anyone that reads her books, learns to be more weary of their human counterparts, and become less of a possible victim, then she feels her job is well worth it. I really liked that she said that, for if there is one thing I have learned from reading True Crime from years and years, kind of a morbid fascination as to how far humans are able to go in their evil pursuits, is that I have become highly cautious in just about any occasion. The stories in the book, specially the first ones, are horrific in nature, and Mrs. Rule writing is clear, and easy to follow. Plenty of photographs add to the overall value of the book, and yes, some of the stories at the end are relatively short, and in no time one starts to read them and they are finished. I am convinced that there always is someone plotting evil acts, and that when it comes to these sort of criminals, the only solution is to be armed and ready to respond to any possible harm they may want to inflict. The time for the innocent victims that stopped to pick up shady characters on the side of the road, or befriended an absolute monster, or the many ways in which evil may cross paths with nice people, the time for the bad people to have the upper hand is hopefully coming to an end. It is better to be distrustful than trustful, specially with people one knows very little about. Ann Rule's latest book was read very fast. That happens when one has been reading books for decades, their speed to tell a good story and devour a book, can be something to consider but thankfully this particular book cost a modest price, so in the end it was a good bargain, and an even better read. 4 Stars.
Read more
17 people found this helpful

Cynthia Fischer
5.0 out of 5 stars another good read by Ann Rule
1 October 2015 - Published on Amazon.com
Format: Kindle EditionVerified Purchase
I have been a big fan of this talented author for many years. She does a fabulous job of thoroughly describing events in detail so one can follow the story.
These are sad and senseless tragedies often brought about by people who know them, as well as fate in being in the wrong place at the wrong time.
Ann Rule's stories are also great cautionary tales as they may serve to remind all of us to just pay attention.
I will miss her! I'm sorry I never told her how much I admire her strength...
Thank you
Read more
6 people found this helpful
Go to Amazon.com to see all 477 reviews 4.3 out of 5 stars
Get FREE delivery with Amazon Prime
Prime members enjoy FREE Delivery and exclusive access to movies, TV shows, music, Kindle e-books, Twitch Prime, and more.
> Get Started
Back to top
Get to Know Us
Make Money with Us
Let Us Help You
And don't forget:
© 1996-2020, Amazon.com, Inc. or its affiliates