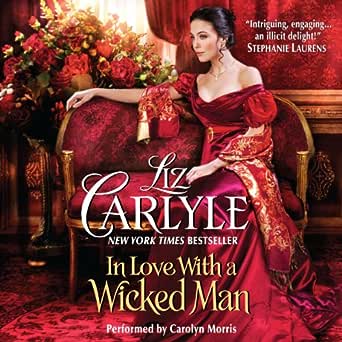 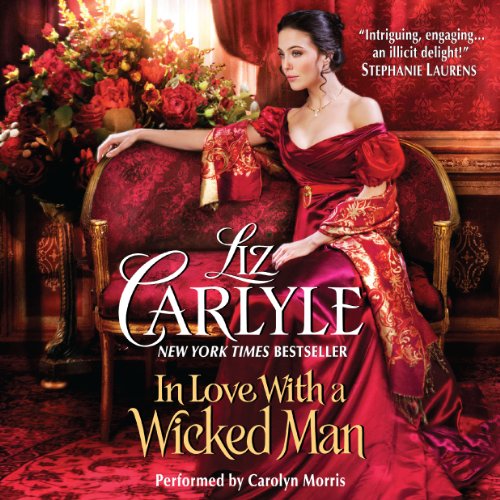 In Love with a Wicked Man

4.3 out of 5 stars
4.3 out of 5
78 global ratings
How are ratings calculated?
To calculate the overall star rating and percentage breakdown by star, we don’t use a simple average. Instead, our system considers things like how recent a review is and if the reviewer bought the item on Amazon. It also analyses reviews to verify trustworthiness.

A Reader
3.0 out of 5 stars Not up to Liz Carlyle Standard
Reviewed in the United Kingdom on 18 November 2013
Verified Purchase
I usually love her books but I felt like she was deliberately trying to bore us to death. It was dreadfully long winded about nothing. I can't even remember the story after only about a week from finishing it. I couldn't stay with it for more than 20 mins at a time. I usually devour a book in a day or two. This one took me forever.
Read more
3 people found this helpful
Report abuse

blossom
4.0 out of 5 stars Enjoyable.
Reviewed in the United Kingdom on 23 October 2016
Verified Purchase
Actually, this is one of my favourite books from KC. Ned Quartermaine seems quite gorgeous to my mind.
Read more
Report abuse

Judge Tabor
3.0 out of 5 stars Did Liz Carlyle Really Write This Book? Not Up To Snuff!
Reviewed in the United States on 20 November 2013
Verified Purchase
Come on! Was this book really written by Liz Carlyle? The Liz Carlyle that wrote "A Woman of Virtue" and "A Woman Scorned?"

Background:
Young Edward, a 12 year old male who appears to be impoverished due to poorly fitted clothing and state of hunger, is being kicked out of his 6th boarding school. The schoolmaster explains to Mr. Hedge, who is apparently Edward's natural father, that Edward has broken the arm of a school mate and he is no longer welcome at the school. Mr. Hedge owns a low gaming hell and wants nothing to do with the raising of Edward until the schoolmaster mentions that Edward is a real whiz at all things mathematical. Apparently Mr. Hedge realizes he can use Edward in his gaming hell, so he decides to take him to London.

You would think we might have a few more details about those years but you would be wrong. We have very little information about Edward's relationship with Mr. Hedge during his growing up years which might have given us further insight into the person he has become. Later on, we have a couple of sketchy details but not enough, in my opinion. I would have enjoyed knowing more than what was written.

In fact the next time we meet Edward, he is Edward Quartermaine (Ned) and it is quite obvious he is now the owner of a very prosperous high class gaming club in a classy area in London. He is holding a pearl necklace in his hands, obviously deep in thought about something or someone. We assume it is a lady. This is confirmed when sometime later, after he has relieved a young gentleman of some property, he mentions that the property is for "Annie."

Whereupon Edward leaves London to go check out his newly acquired property and at some point during this journey literally collides with the plain but lovely Lady Kate D'Allenay. He is riding his horse down the road even as Kate decides to jump her horse over a hedge intersecting with the road. Edward tries to avoid her and in the process falls off his horse, hits his head on a stone, is knocked senseless and upon awakening doesn't even know his name.

Now, the interesting thing about Lady Kate is that she is an actual female peer - yes, she has inherited the barony after her brother died so she is the Baroness D'Allenay of Bellecombe Castle. Since Kate feels that she has had her day in the sun (interpret that "London Season") so to speak and since her plans for marriage never worked out, she puts all her energy toward making her inheritance profitable with the help of her Scottish steward, Anstruther.

Kate is a generous kind-hearted lady who takes her family responsibilities very seriously. She takes Edward home to recuperate and since he has no memory of his wicked past such as it is, he is free to enjoy the lovely Kate, that is until his memory returns and begins to interfere with things. BTW, this reader doesn't really get the wickedness - in fact I kept waiting to hear the big "wicked" secret. Apparently, it is only the fact that he owns this high class gaming hell - what? what?? Okay, I suppose that was considered very wicked.

So, you get it - cute story-line and believe me there are some very interesting minor characters. Kate's mom, Aurelie, and her love interest deserved their own book. Kate's younger sister, Nancy, and her love interest add some cuteness to the story. Alas, the much vaunted house party that Aurelie apparently gave each year was kind of a let down with the exception of Aurelie and her antics. She was quite the character. Loved her! Kate's old love interest is at the house party but little of interest there with the exception of one very funny episode. He is an altogether forgettable character.

UNFORTUNATELY, the love story between Edward and Kate just didn't really take off at least in my heart and emotions. Yes, they had some great times together - nice, quiet, steady, passionate times and they were likeable people. But there wasn't the angst that made your heart beat faster or even the minor misunderstanding (okay, there was a minor/minor/minor one) that might have given the story some highly charged emotional build up and notice I said "minor" because I despise "major" misunderstandings that go on and on. The mystery lady, Annie, brought very little angst into the story because Kate was super understanding about everything when she found out what the deal was. Now, don't misunderstand me I like for my H/h to be understanding but I also like more emotional involvement that what we had in this story.

Ms. Carlyle's book "A Woman of Virtue" is one of my favorite romance stories and I adored old Hell Bent Rutledge who was a frequent character in some of Ms. Carlyle's books. Trust me when I say, Ned Quartermaine's persona falls very short when compared to some of Ms. Carlyle's other Main Guys such as Lord David Delacourt or Bentley Rutledge or even Cole Amherst. Very disappointed in our Main Guy, Ned, even though he was a pleasant fellow. Also, much more might have been made of his heritage instead of a minor show-up by his "real" family at the end.

I will definitely continue to purchase Liz Carlyle's books. One book not quite "up to snuff" does not make or break her standing among my list of "to buy" authors.
Read more
5 people found this helpful
Report abuse
See all reviews
Back to top
Get to Know Us
Make Money with Us
Let Us Help You
And don't forget:
© 1996-2021, Amazon.com, Inc. or its affiliates