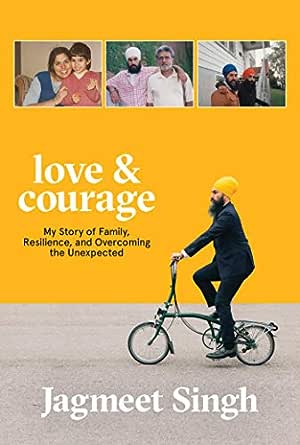 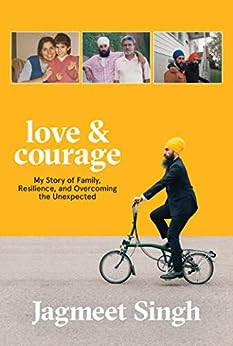 Love & Courage: My Story of Family, Resilience, and Overcoming the Unexpected Kindle Edition

“If the NDP does better, Love & Courage might have something to do with it. Many politicians claim to understand other people’s suffering. Jagmeet Singh has been there. . . . Love & Courage is a brave, raw, compelling testament to one man’s will to overcome. That he wrote it as leader of a national political party is remarkable. I have never seen its like.” -- John Ibbitson, Globe and Mail

"An intimate and compelling story that I cannot ever recall, as a lifelong political biography junkie, ever having read anywhere else." -- Robin V. Sears, Toronto Star

“[Singh’s] surprisingly intimate memoir opens a new window onto a youth that was at times heartbreakingly painful. . . . It does give new meaning to Singh’s signature political catchphrase, ‘love and courage.’”, National Post

“The NDP leader’s new book, Love & Courage . . . [is] not a political memoir but a highly personal one, dealing with racism, sexual abuse and the challenges of coping with an alcoholic parent.”, Winnipeg Free Press

From the leader of Canada’s New Democratic Party—Jagmeet Singh—comes a personal and heartfelt story about family and overcoming adversity.

In October 2017, Jagmeet Singh was elected as the first visible minority to lead a major federal political party in Canada. The historic milestone was celebrated across the nation.

About a month earlier, in the lead up to his election, Jagmeet held community meet-and-greets across Canada. At one such event, a disruptive heckler in the crowd hurled accusations at him. Jagmeet responded by calmly calling for all Canadians to act with “love and courage” in the face of hate. That response immediately went viral, and people across the country began asking, “Who is Jagmeet Singh? And why ‘love and courage’?”

This personal and heartfelt memoir is Jagmeet’s answer to that question. In it, we are invited to walk with him through childhood to adulthood as he learns powerful, moving, and sometimes traumatic lessons about hardship, addiction, and the impact of not belonging. We meet his strong family, including his mother, who teaches him that “we are all one; we are all connected,” a valuable lesson that has shaped who he is today.

This story is not a political memoir. This is a story of family, love, and courage, and how strengthening the connection between us all is the way to building a better world.
See all Product description
click to open popover

Nina
5.0 out of 5 stars Truly inspiring!
21 May 2019 - Published on Amazon.com
Verified Purchase
It's good to understand where this influential future leader is coming from, what his life has been, what challenges he has overcome.. a great read from a well-grounded author who has been through enough life experience to make a great representative - maybe even Prime minister!
Read more
2 people found this helpful

Harman
5.0 out of 5 stars Love it
7 July 2019 - Published on Amazon.com
Verified Purchase
Love it
Read more
Go to Amazon.com to see all 3 reviews 5.0 out of 5 stars
Get FREE delivery with Amazon Prime
Prime members enjoy FREE Delivery and exclusive access to movies, TV shows, music, Kindle e-books, Twitch Prime, and more.
> Get Started
Back to top
Get to Know Us
Make Money with Us
Let Us Help You
And don't forget:
© 1996-2020, Amazon.com, Inc. or its affiliates