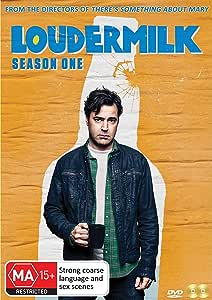 From the creator of Theres Something About Mary and Dumb & Dumber, Loudermilk centers on Sam Loudermilk, a recovering alcoholic and substance abuse counselor with an extremely bad attitude about, well, everything. He is unapologetically uncensored, and manages to piss off everyone in his life. Although he has his drinking under control, Loudermilk discovers that when your life is a complete mess, getting clean is the easy part.

JAS
5.0 out of 5 stars A gem of a show
Reviewed in the United States on 20 June 2020
Verified Purchase
I cannot get over how much I enjoy this show. It’s hard for me to even give the plot a proper description that’ll do it justice.

It’s the main character that drew me to this series, outside of Office Space I haven’t seen him in anything.

But this performance is just so much, I love the no punches pulled personality he has, how he interacts with the world around him in this series alone kept me watching, his sense of humor, his awkwardness.

He is trying to help people, he seems like he doesn’t care but he has shown plenty of times he does care and he is a good person, just he’s got his guard up or doesn’t trust people to not burn him again. Just my take, could be off on a few things. The main character though, easily one my favorite characters in any series.

The supporting cast stand out as well, just really pale in comparison to Ron Livingston.

With the Audience Channel getting sunsetted or whatever the term is, I can’t imagine this Loudermilk, Hit the Road, Mr Mercedes or any other programs getting a another season. Unless they’re picked up by HBO max.

Which is really unfortunate, I keep trying to get a buddy to watch this show. I really hope they give the second season a physical copy, and that by some bizarre twist they announce this and a few other programs getting another season.

KC
5.0 out of 5 stars One of the best shows on TV!
Reviewed in the United States on 5 February 2019
Verified Purchase
Loudermilk is fresh, funny, and real. Because it’s on the AT&T channel, Audience Network, it doesn’t get much exposure, and a lot of people don’t know about it. But, the powers that be really need to put more into their marketing efforts or make it available on Hulu, Netflix, or Amazon Prime, because the world needs to know about this show.
Read more
2 people found this helpful
Report abuse

dblack
5.0 out of 5 stars love these flawed characters
Reviewed in the United States on 2 May 2019
Verified Purchase
One of my favorite shows. This is television that I feel good about after I watch it instead of feeling that I have just wasted time.
Read more
Report abuse

Krysten007
5.0 out of 5 stars Love this show!
Reviewed in the United States on 24 March 2020
Verified Purchase
Funniest show ever!!
Read more
Report abuse
See all reviews
Get FREE delivery with Amazon Prime
Prime members enjoy FREE Delivery and exclusive access to movies, TV shows, music, Kindle e-books, Twitch Prime, and more.
> Get Started
Back to top
Get to Know Us
Make Money with Us
Let Us Help You
And don't forget:
© 1996-2020, Amazon.com, Inc. or its affiliates