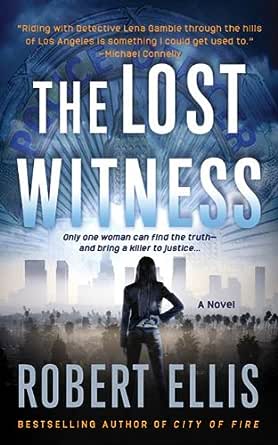 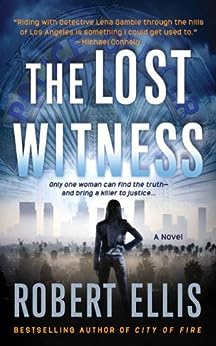 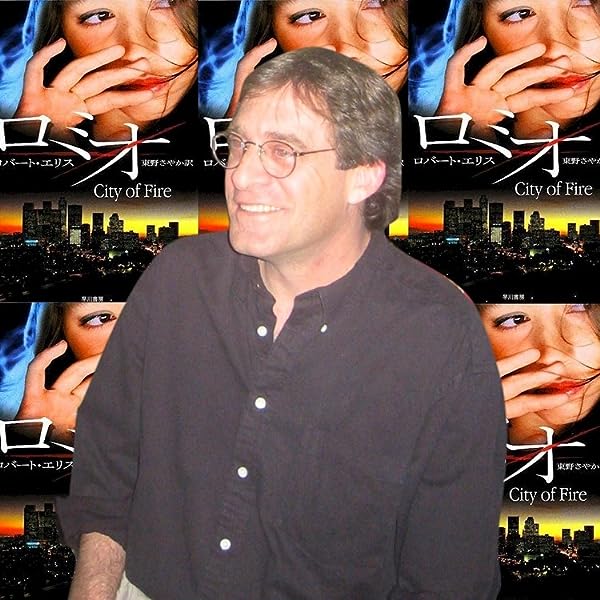 Born and raised in southeastern Pennsylvania, Robert Ellis lived in Los Angeles for sixteen years and now spends his time between California and Connecticut along the central coast. He has written and produced over 1,000 television commercials for political campaigns and has previously published two novels. Robert is currently writing the next thriller in the Detective Lena Gamble series. --This text refers to an out of print or unavailable edition of this title.

The second high-octane thriller in the Lena Gambler series from the bestselling author of City of Fire --This text refers to an alternate kindle_edition edition.

Los Angeles Police Detective Lena Gamble is held in disgrace by department higher-ups for the explosive way the infamous Romeo case played out, even though she’s still hailed as a hero by her colleagues for catching the killer. As punishment, she hasn’t been allowed to handle a real murder investigation since. Until finally, after eight months, the chief tosses her a case…

But when Lena gets a look at the scene, she can’t help but wonder whether she’s being set up to be exiled once and for all: The victim is unidentified. There are no witnesses. And there are no leads. Just a body, chopped into pieces and dropped in a Dumpster—gruesome enough to ensure that, once again, the media will be following Lena’s every move…

ljbrittz
4.0 out of 5 stars The Lost Witness
Reviewed in the United Kingdom on 6 March 2014
Verified Purchase
I've read the other books in the series and it's good to follow on with the main character, but I found this a bit confusing sometimes and a little hard going at times too. I still gave it four stars though because it had a good plot and everything was finished off nicely. I hate books that leave open endings!!
Read more
Helpful
Sending feedback...
Thank you for your feedback.
Sorry, we failed to record your vote. Please try again
Report abuse

Jeffers
5.0 out of 5 stars Excellent
Reviewed in the United Kingdom on 13 August 2016
Verified Purchase
I would recommend this book. Another excellent read. This is the 4th Robert Ellis book I have read and can't wait to start on the next one.
Read more
Helpful
Sending feedback...
Thank you for your feedback.
Sorry, we failed to record your vote. Please try again
Report abuse

Alison26
5.0 out of 5 stars love it
Reviewed in the United Kingdom on 30 January 2013
Verified Purchase
love all robert ellis' books i can recommend this to anyone who likes a thriller and a bit of a girly cop book
Read more
Helpful
Sending feedback...
Thank you for your feedback.
Sorry, we failed to record your vote. Please try again
Report abuse

Will Read
4.0 out of 5 stars Good but flawed.
Reviewed in the United States on 15 September 2015
Verified Purchase
I've read all of Ellis's stuff and I like him. A good smart sharp author when he doesn't get too cute. He can make the plot so complex and layered that the protagonist takes a back seat to his story lines. He can over cook the stew.
When reading his Hollywood background I almost passed thinking the books would be full of the usual preaching that goes on from the Hollywood crew. Like the irony of they stand against gun violence and people owning firearms while they make millions putting almost nothing but gun violence on the screen. Out of all his books this one has a little whiff of that. He has a couple sentence war rant and of course the obligatory crazed violent veteran cliche. Ellis also manages to combine the BIG PHarm and overpaid executive political rants into the plot line. Good book but that kind of stuff is boring. I particularly am put off by authors who put veterans in the role of crazed killers.
I have a new theme for Ellis's next book. Something he should be very familiar with, overpaid hack entertainment executives. Is there not irony in the populist rantings of the Hollywood elite concerning how much executives make vs the common man, but they never seem to criticize their own industry where in producers, directors, writers and actors make obscene amounts of money producing violent brain dead theater and television viewing. That just never shows up on their radar. No one wants to tip over the rice bowl. For example Stars who make environmentalism their clause owning private islands to which they fly in private planes burning tons of jet fuel...Leonardo. Maybe the next book should be about a hypocritical Hollywood executives who produces viewing garbage and charge the common guy nine bucks to view it. Hey, Mercedes don't come cheap so you average folk had better fork out that hundred dollars to take your spouse and kids to the theater and buy them some popcorn and a drink.
Come on Ellis. You are a bright guy, you can do better.

Yeah, I know, I'm whining but if the next books are about "Big Oil" I'm off the Ellis books.

P.C.
4.0 out of 5 stars Engaging
Reviewed in the United States on 5 February 2017
Verified Purchase
I have enjoyed both books in this series and I'm half way through number 3 now. My only concern is that each book centers around the bad cops and D.A's that always have it in for Lena. I get it...LAPD is large and there were a few years they had some serious issues with bad cops...but seriously...every book? I also wish Lena had a bit more backbone....she's somewhat weak when verbally confronted by fellow officers that are not her superiors. I know there are times the "soft" approach is the better choice, but so is a strong presence when your equals are attacking you...sometimes it's difficult to respect her. I worked in and with LE for many years...I don't personally know any female officers that would remain silent. Silence is often perceived as "permission".

The stories, however, are engaging and suspenseful. The story moves at a perfect pace...at least for me...it doesn't speed through or lag either. More often than not, I'm able to figure out who the bad guy is and what the ending result will be...not so much with these books. I am hopeful there will be continuing books in this series.

Ward
5.0 out of 5 stars The Lost Witness
Reviewed in the United States on 16 January 2016
Verified Purchase
Better than book one. Part of the theme was the same about bucking headquarters. Much different outcome however. A good solid again with the author playing fast and loose with our(readers) minds. Twists, turns, loops, backwards, sideways and a few other directions by the author lead to an extremely good read. The lengths o f books 1&2 are extremely good as I prefer longer books. It is my belief that the author puts more work into the story and I get my money's worth! In both cases I did. However I wish they were less money as my budget has decreased in retirement. Buy this book from Amazon as it is a superb read.
Kindle Customer Ward

Jackie
5.0 out of 5 stars Another great Lena Gamble murder mystery.
Reviewed in the United States on 21 September 2015
Verified Purchase
This is another great Robert Ellis - Lena Gamble murder mystery. The plot is really like an onion that is slowly peeled, revealing a twisting plot that really, really keeps the reader guessing. This is a complicated plot because there are so many moving parts, many characters that turn out to be integral to the murder. There's even a twist on the dead girl! Lena shines as the detective, working with Rhodes, the detective she'd secretly like to know much better and intimately! The bad guys really surprised me at how conscienceless they are. This book is so well written, I just love Ellis. I highly recommend him and all of his books.
Read more
2 people found this helpful
Helpful
Sending feedback...
Thank you for your feedback.
Sorry, we failed to record your vote. Please try again
Report abuse

James T. Brown
5.0 out of 5 stars Exceptional..
Reviewed in the United States on 3 January 2019
Verified Purchase
Robert Ellis was creating a superstar with Lena Gamble, especially the first two, City of Fire and The Lost Witness. Why he gave up the project is a mystery to me. Maybe he got tired of hearing that she was a female Harry Bosch. So what? If you're going to sincerely flatter someone, may as well be the best! I really, really enjoyed this series.. I would like to see Mr. Ellis return to the series and give us more Lena Gamble!
Read more
Helpful
Sending feedback...
Thank you for your feedback.
Sorry, we failed to record your vote. Please try again
Report abuse
Load more international reviews

winnie
5.0 out of 5 stars My Goodness
Reviewed in the United States on 12 June 2019
Verified Purchase
This book has so many twists and turns that it is hard to put down. I had read the first book, in the Lisa Regan series. Could only find the 2nd and 3rd through Amazon. Still reeling from the ending of #2 and cannot wait to start #3. I fully recommend reading #1. Lens Gamble is a great but flawed detective. One,caveat, though. There is only 3 in series.
Read more
Helpful
Sending feedback...
Thank you for your feedback.
Sorry, we failed to record your vote. Please try again
Report abuse

Kindle Customer
5.0 out of 5 stars Good read
Reviewed in the United States on 3 November 2019
Verified Purchase
She is a gold plotter. Her novels are clear and fast paced. The body count rises fast. The fictional deaths in her tale rise as fast as they do in today's Chicago.
Read more
Helpful
Sending feedback...
Thank you for your feedback.
Sorry, we failed to record your vote. Please try again
Report abuse

ksc
5.0 out of 5 stars Terrific!
Reviewed in the United States on 31 December 2018
Verified Purchase
Satisfying page-turner. LOVED this book. LOVE Lena Gamble, who is one keen & gutsy broad. Looking forward to her next book, but already sad it will be the third & last in this series...wish this character-driven story line would continue!
Read more
Helpful
Sending feedback...
Thank you for your feedback.
Sorry, we failed to record your vote. Please try again
Report abuse

Nicholas Dodd
5.0 out of 5 stars A great read
Reviewed in the United States on 22 May 2015
Verified Purchase
L.A. Is L.A., and crime stories by different writers are bound to cover some of the same territory. Ellis seems to be paying tribute to both Michael Connelly with small references to things like the tunnels in Vietnam, and Karin Slaughter, choosing the somewhat unusual name, Lena, for his main character. But that's where any similarities begin and end. Ellis is Ellis. He develops a complex set of characters and situations, full of twists and turns, one or two a little hard to believe ( the desert scene ), but otherwise a real page-turner and a very satisfying read. I loved the first in the Lena series, and now I'm going for the third.
Read more
Helpful
Sending feedback...
Thank you for your feedback.
Sorry, we failed to record your vote. Please try again
Report abuse